Prepare to Meet Your Doom

Followers of this blog may harbour a suspicion that we possess an unhealthy interest in scenes of violence and torture in medieval manuscripts.  The following should remove any doubt on the matter! 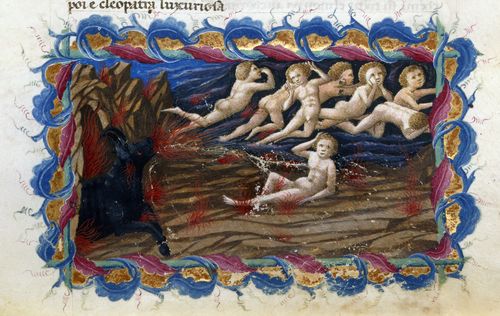 Last week, the Getty Museum (@GettyMuseum) tweeted this image from our Digitised Manuscripts site to highlight that 13th February was marked in some medieval calendars as the day on which Hell was created (to which anyone who has forgotten to buy a Valentine’s Day present can surely attest).

This has inspired us at the British Library Medieval Manuscripts Blog to explore depictions of Hell, past and present.

Aficionados of 1990s video games will likely have fond memories of Doom, id Software’s seminal first-person shooter.  The plot follows the typical ‘scientific experiment gone awry’ trajectory.  While experimenting with teleportation technology on Mars, some scientists inadvertently open a portal to Hell – whoops!  (Guess this is why we have risk assessments…).  You, the sole survivor, must fight your way back to Earth, with just an assorted array of guns and a chainsaw (yes, really) at your disposal to fight off the assembled hordes of demons. 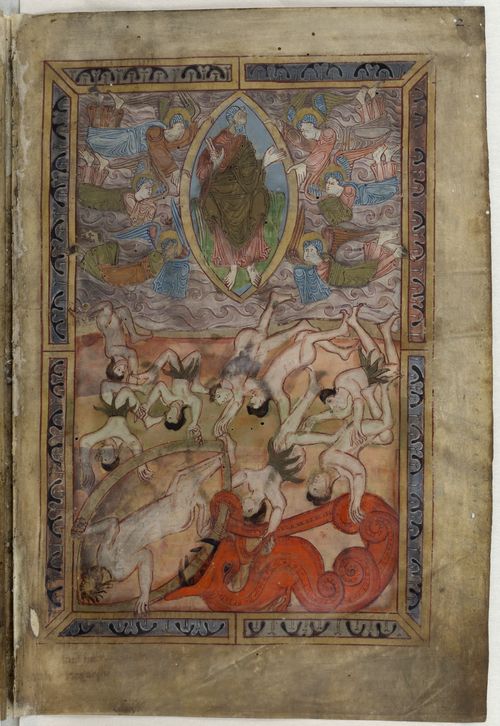 The portal to Hell in Doom has an obvious antecedent in medieval art: the Hell-mouth, a representation of Hell as a gaping, often flaming, animalistic maw.  The fall of the rebellious angels from Heaven, illustrated here in the Old English Hexateuch, foreshadows the later fall of man.  The unusual depiction of a Hell-mouth as a serpent reinforces this narrative connection as well as Lucifer’s agency in both events.

The rather horrifying motif of the Hell-mouth was not confined to medieval manuscripts.  It appears – most commonly as a hairy, fanged beast – in stained glass windows and wall- and panel-paintings as well.  It was therefore visible to ordinary medieval people, for whom owning an illuminated manuscript was an unimaginable luxury, and the prospect of suffering an eternity in Hell an imminent possibility.  St John’s visions of the end of the world and the Last Judgement were frequently depicted in ‘Doom paintings’ on the walls and rood-screens of medieval churches.  Though mostly destroyed at the Reformation, examples have survived, particularly in East Anglia, some of them ironically protected and preserved by the very whitewash that was meant to obliterate them. 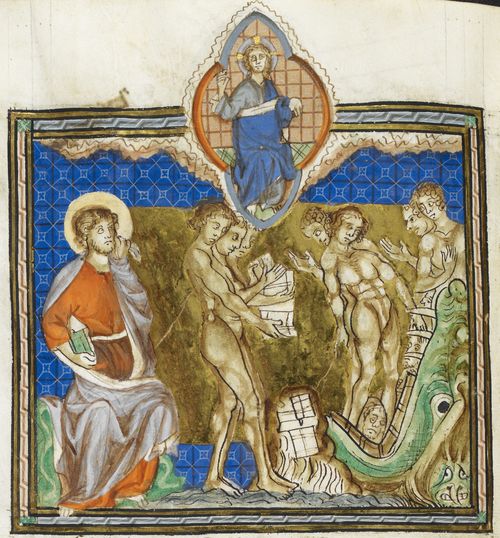 Detail of a miniature showing the Last Judgment, from the ‘Abingdon Apocalypse’, England, third quarter of the 13th century, Add MS 42555, f. 77v.

Hell-mouths were commonly depicted in illuminated Apocalypse manuscripts, swallowing up the souls of the damned, while God, the angels and the souls of the saved look on from the safety of Heaven. 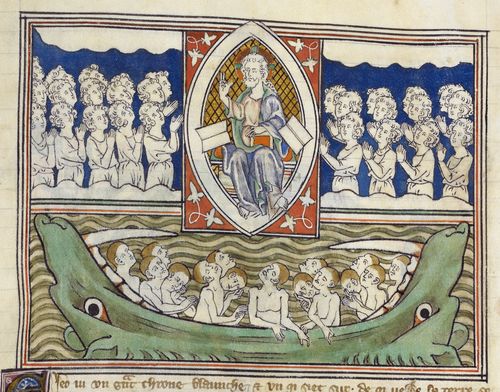 Detail of a miniature showing the Last Judgement, from the ‘Queen Mary Apocalypse’, England (London or East Anglia), first quarter of the 14th century, Royal MS 19 B XV, f. 40r

A personal favourite of ours comes not from an Apocalypse manuscript but from a Book of Hours.  Along the bottom of the pages, a procession of demons escorts the souls of the sinful to Hell. 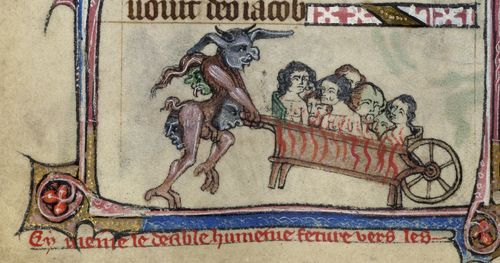 Detail of a bas-de-page scene showing a demon carrying souls to Hell in a wheelbarrow, from the ‘Taymouth Hours’, England (London?), second quarter of the 14th century, Yates Thompson MS 13, f. 139v.

Demons are showing carrying souls in shoulder-baskets and other contrivances, or just dragging them along the floor with a rope. 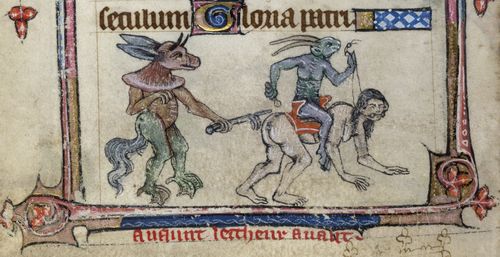 In this example, demons torment the soul of a lecherous woman as punishment for her sins: she is being ridden by one demon while the other prods her in the buttocks with a grapple and shouts ‘Avaunt, leccheur, avant’ (‘Forward, lecher, forward!’). 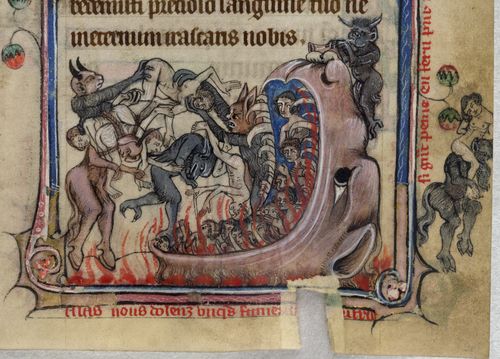 Detail of a bas-de-page scene showing the casting of souls into Hell, from the ‘Taymouth Hours’, Yates Thompson MS 13, f. 142r.

The procession culminates in the demons slinging the souls into the flames, to a little trumpet-fanfare provided by a demon perched on the Hell-mouth’s snout.

Contemporary critics of Doom’s violence, gore and satanic iconography (which still give us the shivers) ultimately missed the point that the storyline was inspired by Christian mythology.  After the eponymous character ‘Doomguy’ defeated the demons on Mars, he ventured into Hell itself to quash them on their home turf, and thereby re-enacted Christ’s Harrowing of Hell. 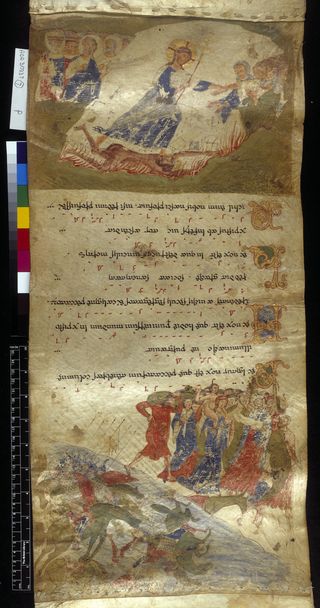 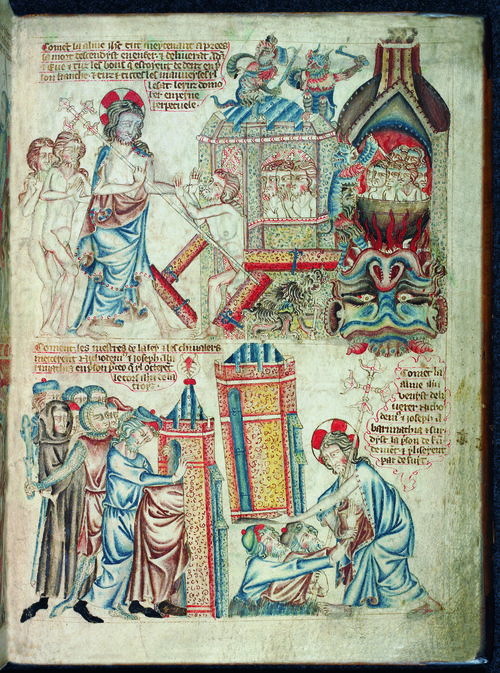 Detail showing Christ rescuing souls in the Harrowing of Hell, with demons with trumpets and grapples and another rendering souls in a cauldron above a Hell-mouth, from the ‘Holkham Bible Picture Book’, Add MS 47682, f. 34r

Alas, this was ultimately unsuccessful: upon Doomguy’s return to Earth, he finds that the hordes of Hell have overrun the planet (which rather neatly lay the ground for a sequel, Doom II: Hell on Earth).

Let us know if you have any favourite video games that deserve special treatment by the Medieval Manuscripts Blog!  Tweet us on @BLMedieval.

Interesting to note that gates of hell -when souls are entering through- were depicted more like animal body parts than metaphysical-geographical sites. It seems that the latter only happened on the pictorial theme of Christ releasing the souls.

I have always been disappointed that nothing worthy happened around my birthday. It is so rewarding to know that Hell was created just a coupla days later, thank you, dears, for warming my heart so much! Also, it is strangely reassuring and aesthetically pleasing to see so many depictions of naked people suffering horrendous pains and meeting their sticky ends in a big gaping hole of Hell. The fate of the lecherous woman's buttocks is a timely reminder to us all, as well (to pay the tax and do something about our ISAs, for example)