With the twin goals of our readers’ edification and entertainment forever at the forefront of our minds, we at the BL Medieval Manuscripts Blog have hatched a plan for a series of posts on saints over the coming weeks and months, timed to coincide with their individual feast days.

In devotional compilations such as Books of Hours, miniatures of saints were a common presence alongside biographies of their lives or other texts to be read during private prayer or reflection.  The choice of which saints to include in one’s book could be a very personal one.  For example, the decoration in the magnificent Bedford Hours (Add MS 18850) was adapted following the marriage of John, duke of Bedford, to Anne of Burgundy.

Prefacing the portion of the manuscript containing suffrages to the saints is a large miniature showing Anne of Burgundy kneeling in veneration before her namesake and patron, St Anne, who is accompanied by her daughter the Virgin Mary, and her grandson, Jesus Christ. 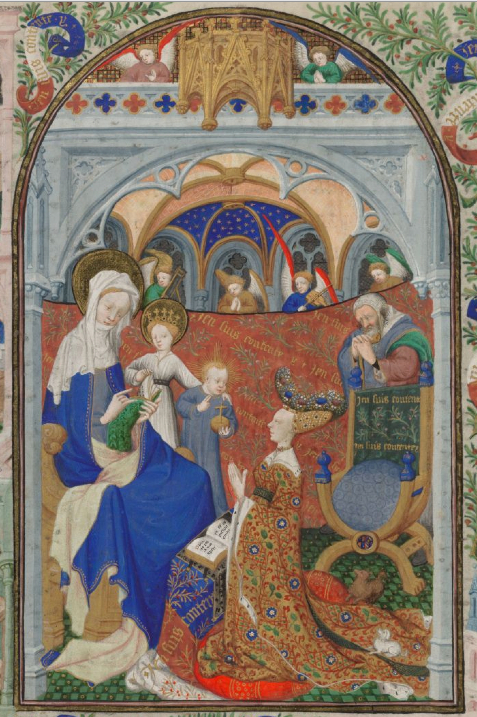 The association of saint and book-owner is continued in the border, for example with Joachim and Clopas, each of whom is identified by different interpretations of the Bible as the father of St Anne.

Saints could be depicted in a variety of contexts in manuscript miniatures.  On this page of the Bedford Hours, we see them thinking, reading, writing and discussing, enclosed in private alcoves or chambers that evoke the architecture of the medieval palace.

By reflecting the reader’s own behaviour and environment as she studied her Book of Hours, these miniatures complemented the text by cultivating her identification with a saint’s life.  Enhancing the exemplary of these lives in this way further encouraged the reader to emulate a saint’s virtues or good works, to shape her behaviour according to the saintly mould she held before her.

First, though, a little taster of what is to come of our series of saints.  Certain objects or animals became associated with a saint as a consequence of the events of his or her life or the manner of his or her death.  These attributes made depictions of saints in stained glass, stone statuary or manuscript books readily identifiable to anyone familiar with their stories.

In Harley MS 2332, we see saints’ attributes being used as a visual shorthand for the dates of their feast days during the calendar year.  This physicians’ almanac has appeared a couple of times on this blog before: when we solicited help assigning a date of production on the basis of a series of pictograms and dates attached to them; and when the volvelle on f. 23v appeared in Guess the Manuscript.

The book is small; measuring only 140mm x 100mm, it was designed to be portable.  It was made using a less expensive grade of dark and thick parchment, and was quite possibly written and even illustrated by the person who owned it.  It was produced perhaps around 1412.  It is of English origin, but the selection of certain saints for the calendar at the beginning of the book strongly suggests a connection or at least familiarity with eastern England: East Anglia and Lincolnshire (Sts Guthlac and Edmund), Yorkshire (Sts John of Beverley and William of York) or Northumberland (Sts Cuthbert, Oswald and Wilfrid). 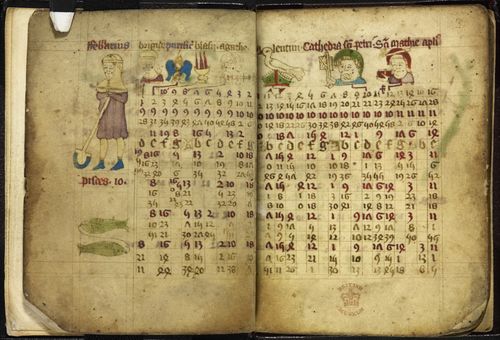 Each month in this calendar occupies an opening, with the traditional activity of the month and the relevant zodiac symbol on the left.  Along the top, symbols provide a quick visual guide to significant dates within the month, with lines directing the reader to when these feasts should be celebrated. 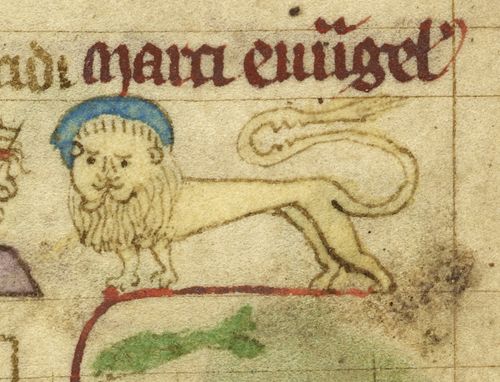 There are also symbols relating to saintly miracles or acts. 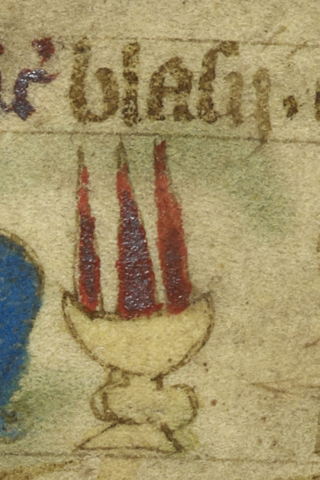 St Blaise’s day (3rd February) is represented by candles used in the Blessing of the Throats ceremony, which commemorates his curing of a boy choking on a fishbone. 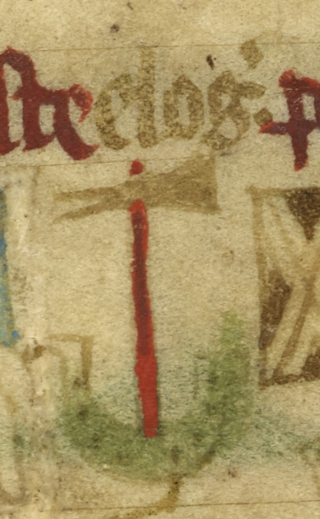 The hammer and horseshoe recall the legend that St Eligius (25th June) shod a skittish horse through the novel practice of first cutting off its leg, attaching the shoe, then miraculously reattaching the leg. 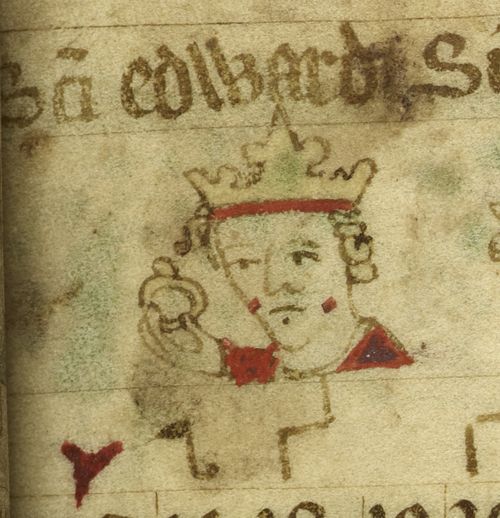 Here the creator of the tinted drawings has conflated two different St Edwards.  On the feast day of St. Edward, king and martyr (18th March), he has drawn Edward holding a ring.  This refers to a story from the life of St Edward the Confessor, whose feast day is 13th October.  A beggar requested alms from Edward the Confessor in the name of St John.  Having no money on his person, the king instead gave the beggar a ring from one of his fingers.  Certain legends have St John guiding some Englishmen to safety during their pilgrimage to the Holy Land, and handing them the ring to give to the king; others record the saint appearing before the king and returning the ring personally. 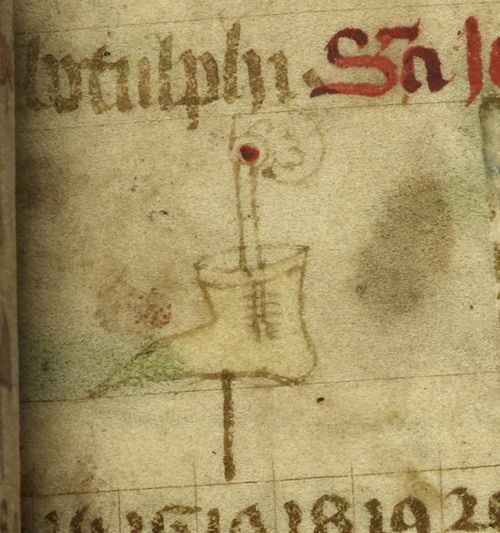 Other symbols evoke the subsequent patronage of saints.  For instance, St Botulph (17th June), patron saint of travellers, to whom churches at town gates were often dedicated, is represented by a shoe (the crozier poking out of it refers to the fact that he was sometimes referred to as ‘bishop’). 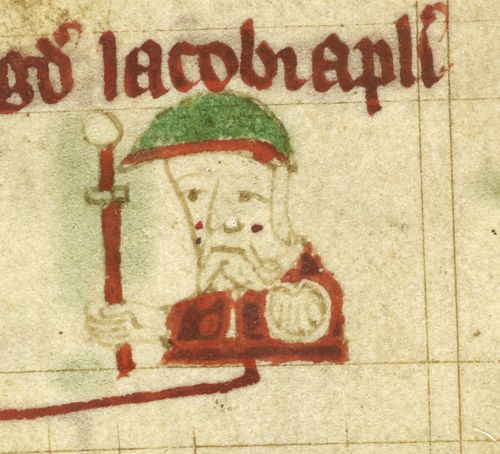 St Jacob/James, whose shrine at Compostela was and remains a major pilgrimage destination, is shown as a pilgrim with a walking staff and scallop badge (25th July). 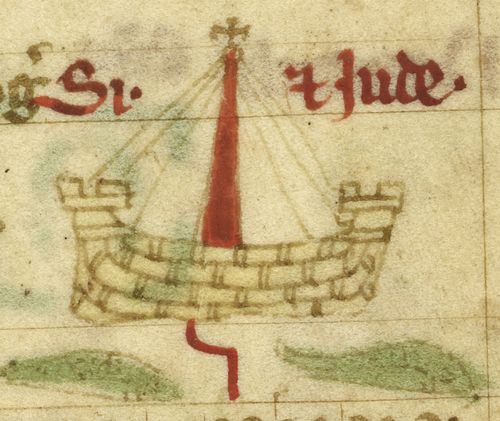 St Simon, patron of sailors, and St Jude, patron of last causes, share a feast day (28th October) and are represented by a ship.

And finally (what you’ve obviously been patiently waiting for), some symbols represent the ways in which particular saints were martyred. 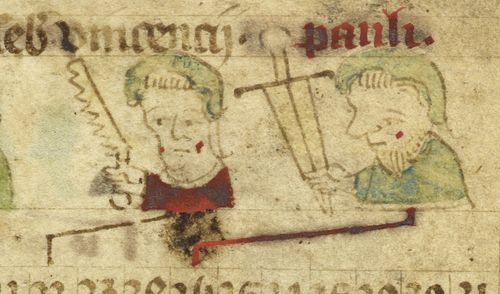 St Vincent and St Paul (22nd and 25th January) each hold tools used to kill them: a saw, representing St Vincent’s torture; and a sword, representing the beheading of St Paul. 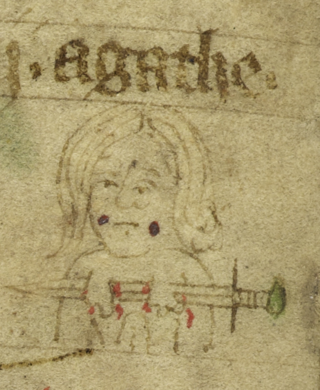 On the 5th of February, the gruesome mutilation of St Agatha is illustrated.

St Bartholomew, who was flayed alive then crucified, is drawn holding a knife (24th August), alongside the decapitated head of John the Baptist (29th). 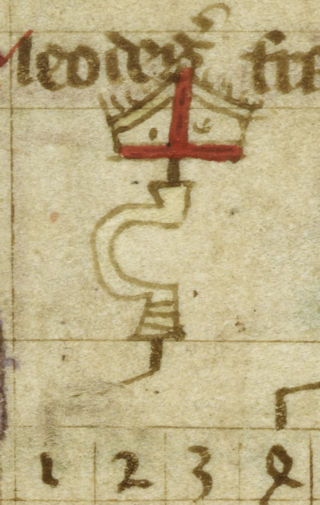 Leodegar had the misfortune to have his eyes put out with a drill, which instrument is shown next to his feast day on 1st October.

These are just a few examples; we’ll let you figure the rest out!  The manuscript is available in its entirety on Digitised Manuscripts.  There are still some unresolved puzzles in the manuscript: for instance, does anyone have idea what event was commemorated here? 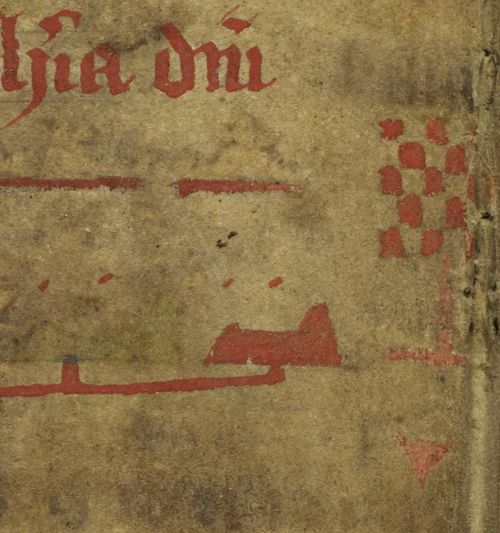 The title has been erased, and the connecting line to the calendar is heavily smudged – but what is the meaning of the checkerboard pattern, and what might its connection be to the 13th of January?

Keep your eyes out (sorry St Leodegar!) for future posts on saints…

Thanks for this initiative: always good to see themed material on the blog. Look forward to what follows.

re: Erasures and checkerboard pattern, Harley MS 2332, f. 1v. I don't know about the checkerboard, but the mostly erased figures beside it are obviously the Three Kings (3 crowns and 2 gifts are still visible).& relate to Jan. 6, not 13.