We are delighted to announce that the British Library has acquired two major manuscripts, following temporary export bars. One is the Catholicon Anglicum, a 15th-century English-Latin dictionary, and the other is a printed treatise on clerical marriage, owned and annotated by John Ponet, Bishop of Winchester. 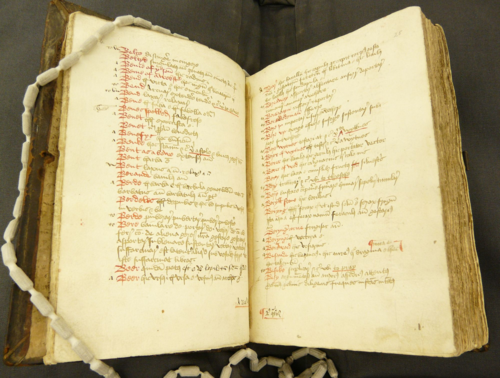 The Catholicon Anglicum, a medieval dictionary newly-acquired by the British Library

Copied in 1483, and still in its original binding, the newly-acquired manuscript of the Catholicon Anglicum (Add MS 89074) is the only complete witness of that text. It had last been seen in 1881, when the text was edited, and its whereabouts were unknown for more than a century. The British Library already holds the only other copy known to survive, Add MS 15562, which is slightly earlier in date but lacks many of its leaves. 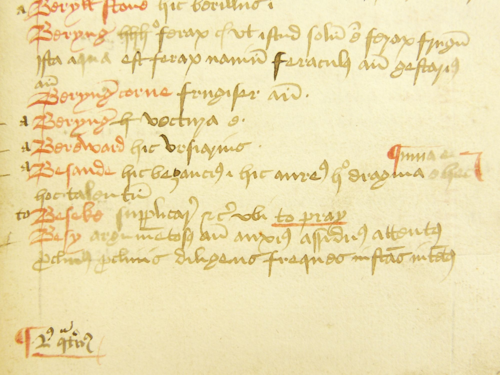 Detail of the Catholicon Anglicum

The newly-acquired dictionary comprises approximately 8,000 Middle English words, each written in red ink, followed by their Latin (and sometimes Greek) equivalents written in brown ink. The use of dialect words by the anonymous compiler indicates that the Catholicon Anglicum was of Yorkshire origin. Entries range from the mundane – for example, ‘a Milne stane’ (a millstone) – to the more conceptually complex – such as ‘a Mynde’. As one of the earliest examples of an English dictionary, the Catholicon Anglicum is of profound importance for the study of the development of both the English language and of English lexicography.

Also following a temporary export bar, the British Library has acquired John Ponet’s personal copy of a 1554 treatise against clerical marriage. Ponet (c. 1514-1556) was a Cambridge academic and a passionate exponent of religious reform, who became Bishop of Winchester under Edward VI in 1551. He had married in 1548, before clerical celibacy had been abolished, and published a treatise the following year, entitled A Defence for Marriage of Priests, by Scripture and Ancient Writers. Upon the accession of Mary I, Ponet went into exile in Strasbourg. 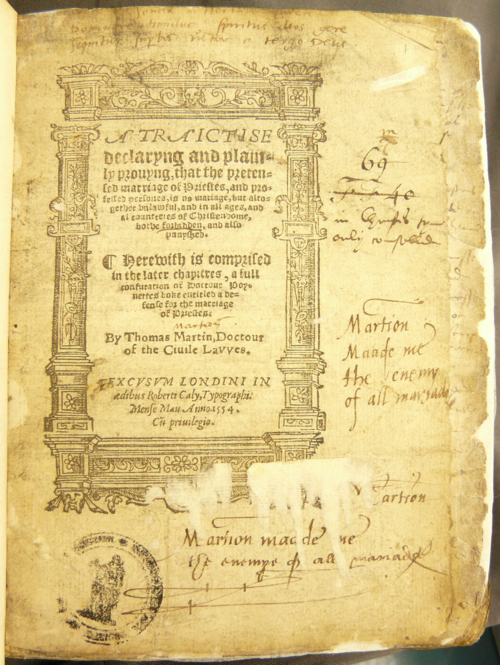 In 1554, Thomas Martin, a civil lawyer and religious conservative who had recently returned to England, published a refutation of Ponet’s treatise, entitled A Treatise declaring and plainly proving that the pretensed marriage of priests…is no marriage, but altogether unlawful. This new acquisition (Add MS 89067) is Ponet’s own, interleaved and annotated copy of Martin's treatise. Declaring angrily on the frontispiece ‘Martin made me the enemy of all marriage’, Ponet began a point-by-point attack upon Martin’s work and defence of his own, filling the blank leaves and margins with manuscript notes in English, Latin and Greek, which later formed the basis for his own printed response in 1556, An Apology fully answering…a blasphemous book…against the godly marriage of priests.

Full digital coverage of the Catholicon Anglicum and Ponet's book will be made available in the coming months on our Digitised Manuscripts site, and we will also make both items accessible to researchers using our Manuscripts Reading Room. We believe that study of both manuscripts will contribute enormously to knowledge of their respective fields, and anticipate that many researchers will profit from having access to these new acquisitions.

The news of the British Library’s acquisition of Ponet's book has been greeted by Diarmaid MacCulloch, Professor of the History of the Church at the University of Oxford: ‘I am delighted and relieved that the British Library has stepped in as guardian angel for a very precious book. This printed work has an especial significance for our national history, as it is annotated in manuscript by one of its author's principal enemies. Two major players in England's Reformation have an angry conversation before our eyes, the first married Bishop of Winchester combatting the arguments of his unmarried predecessor-Bishop's Chancellor against clerical marriage. Now this unique document is not just safe in public custody, but will be easily available for all to read.' An opening from Ponet's book, showing how he had it interleaved to add his own comments

Ponet's book was offered for auction in the Mendham sale at Sotheby's, London, on 5 June 2013, at which the British Library had bought four lots. The Library's view was that the sale was regrettable, but once it became clear that the sale would go ahead, a decision was made to try to purchase certain lots, in order to preserve some of the Mendham books for the national collection and to maintain public access to them. The dispersal of the collection involved the risk that books hitherto available for research in the United Kingdom would leave the country or disappear into private hands.

Today's announcement comes hot on the heels of our exciting recent acquisition of the Mystère de la Vengeance, a beautiful 15th-century illuminated drama. You can already see images of the Mystère on Digitised Manuscripts (Add MS 89066/1 and Add MS 89066/2).

Posted by Ancient, Medieval, and Early Modern Manuscripts at 9:52 AM