A World of Words

The Catholicon Anglicum, a fifteenth-century English-Latin dictionary acquired by the British Library earlier this year, is now fully online on Digitised Manuscripts. 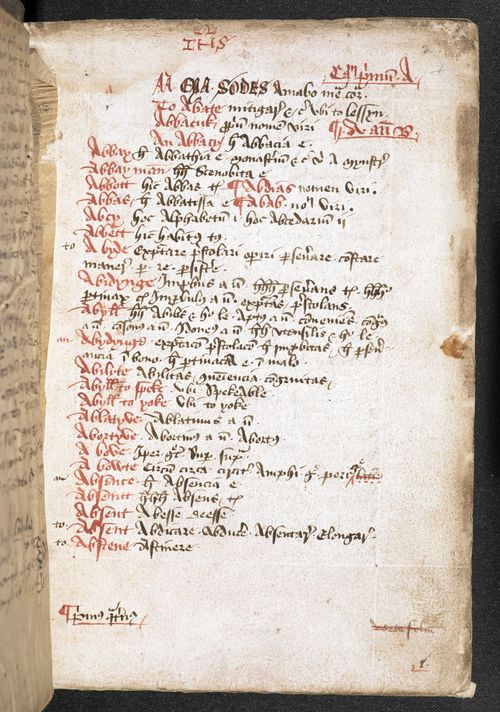 The British Library possesses a world-class collection of materials for the study of late medieval language and lexicography.  The newly acquired Catholicon – Add MS 89074 – is the only known complete copy of the text, and was made in 1483.  An earlier, but fragmentary, example is also held at the British Library (Add MS 15562).  They are accompanied by a range of other late medieval bilingual dictionaries in the British Library’s collections.  Add MS 22556 contains an earlier English-Latin dictionary, the Promptorium parvulorum or ‘Storehouse for children’ attributed to Geoffrey the Grammarian, Dominican friar of King’s Lynn (fl. 1440).  A Latin-English dictionary, the Medulla grammatice or ‘Core of Grammar’ is found in two manuscripts (Add MS 33534, Add MS 62080) and in a third bound together with another copy of the Promptorium (Add MS 37789). 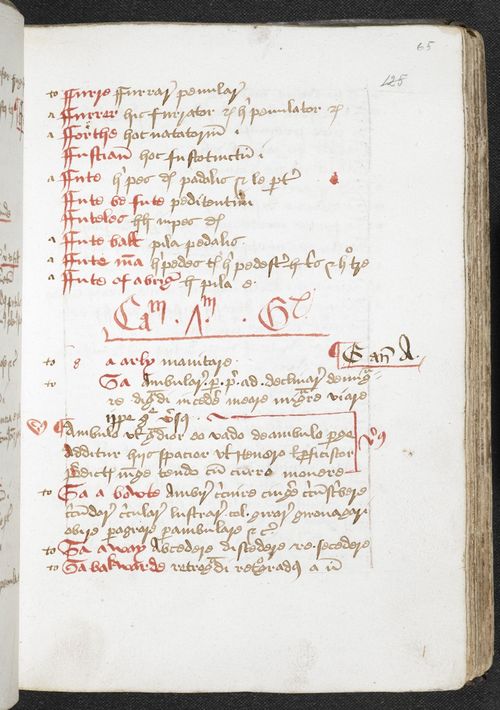 These dictionaries emerged at a time when the foundation of new grammar schools across England generated a demand for reference and pedagogical tools that aided students and teachers alike in Latin translation and composition.  The presentation and layout of the pages of the Catholicon Anglicum was designed to aid ready reference to its content.  The organisation of the words is largely alphabetical: each ‘chapter’ opens with a large, numbered heading that gives the opening letter for all the words that follow, and is further subdivided by marginal subheadings that give the second letter.  Flicking through the book, the reader could therefore quickly find the relevant section of the text and thus the relevant word he sought. 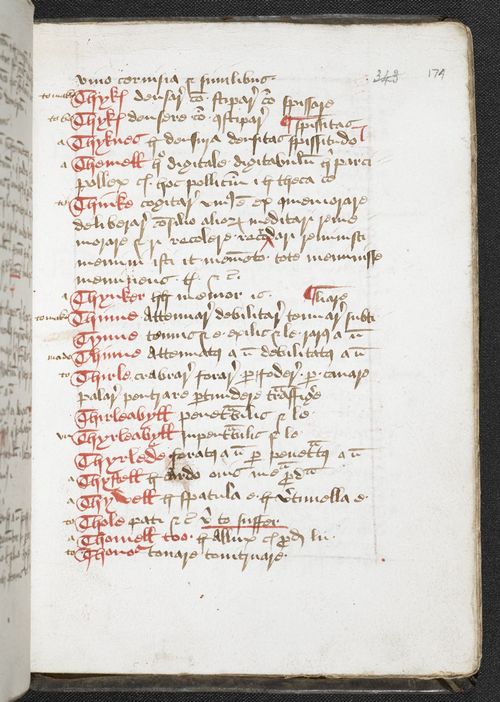 Each of the Middle English headwords is rubricated (written in red ink), capitalised with a ‘littera notabilior’, and aligned against the left-hand edge of the writing space.  The Latin translations follow in brown ink.  At a glance, the reader can differentiate between the beginning of a new entry and the continuation of one from a previous line, and distinguish between the Middle English and Latin words written by the scribe.  The compiler of the dictionary used the margins to insert words that signalled the parts of speech to which the headwords belonged: nouns are prefaced by the indefinite or definite article, and verbs by ‘to’ (thus giving the infinitive form). The compiler also exploited the margins in order to group families of words together that strict alphabetical order would otherwise have kept apart.  For example, adjectives are frequently accompanied by their antonym, with ‘un-’ written in the margin so as not to interrupt the alignment of the headwords. 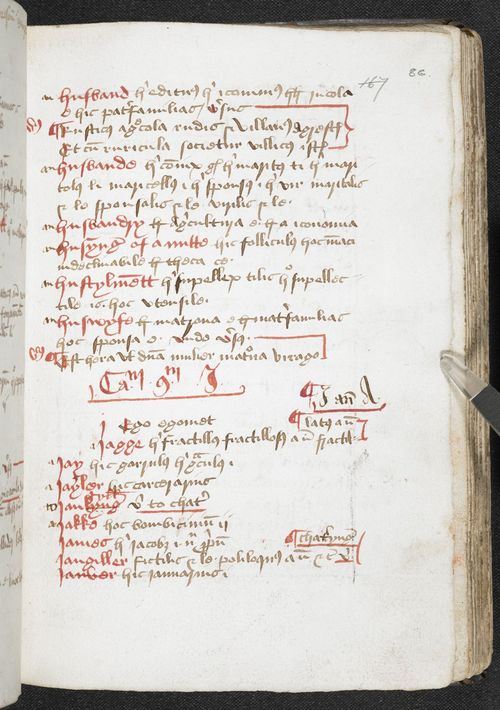 Detail of Middle English headwords and their Latin equivalents, including ‘to Iangyll’ and ‘Iangiller’, with cross-references to ‘to chater’ and ‘chaterynge’, Add MS 89074, f. 86r

Cross-references to other Middle English words that might yield further relevant Latin words were provided at the end of entries, the headword rubricated by red underlining and prefaced by ‘ubi’.

Detail of Middle English headwords and their Latin equivalents, including an example sentence for the use of ‘to Hele’, Add MS 89074, f. 80r

A remarkable feature of the Catholicon is the sheer number and variety of Latin words the compiler provided for each Middle English one.  Since these were not necessarily synonymous with one another, the compiler provided guides to grammatical construction as well as example sentences that showed how particular words were used. 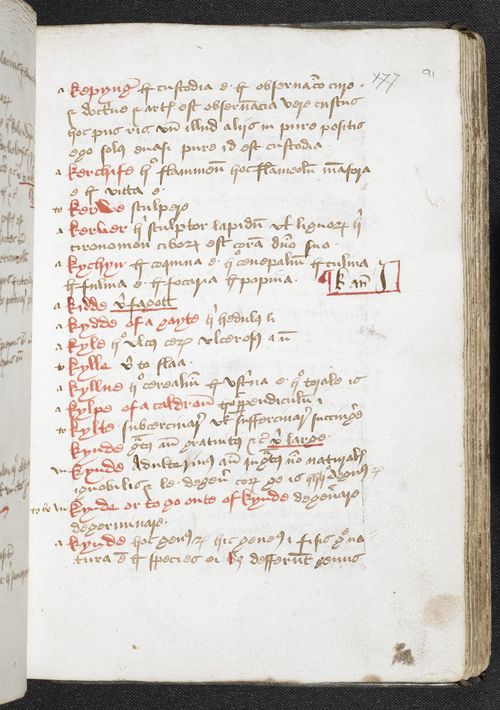 Detail of Middle English headwords and their Latin equivalents, including the entry for ‘un- Kynde’ and a guide to the pronunciation of ‘degener cor[repto] ge’, Add MS 89074, f. 91r

Yet the Catholicon was not meant as just a silent tool, for use solely in written Latin composition.  It also belonged in an oral context, in which Latin was recited, read aloud, even performed.  Throughout the Catholicon, Latin words are accompanied by ‘correpto’ and ‘producto’, signifying when vowel sounds should be shortened or lengthened. 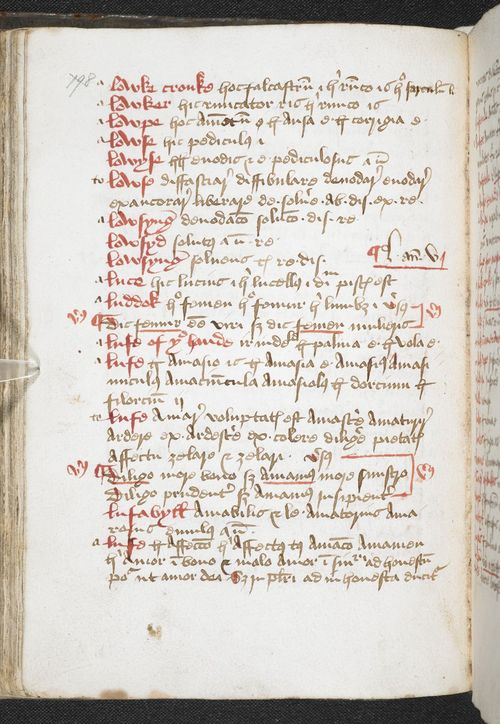 Detail of Middle English headwords and their Latin equivalents, including verses on the uses of Latin words for ‘to Lufe’, Add MS 89074, f. 101v.

Mnemonic verses, which gave the reader a memorable guide to the usage of the Latin words, were probably intended to be rehearsed and memorised out loud, just like in classrooms today. 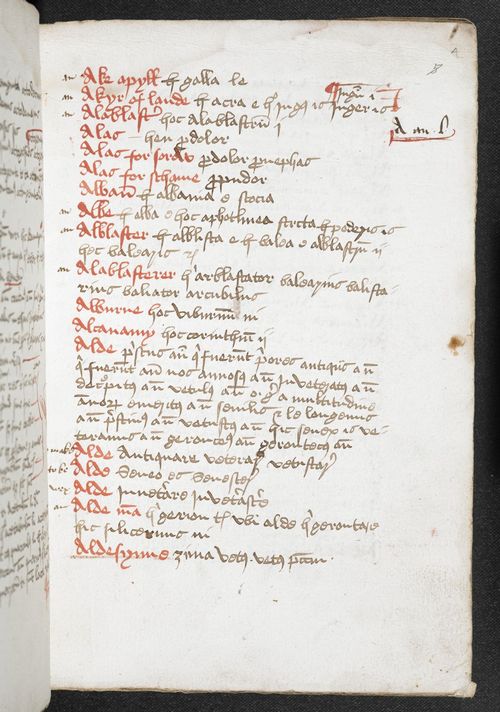 The Catholicon must also have found use in the composition of Latin dialogue.  It opens not with a straightforward noun, verb or adjective, but an exclamation: ‘Aaa!’.  ‘Alas!’ and its Middle English variants are each enunciated: ‘heu’, ‘prodolor’, ‘prodolor pronephas’ (for ‘Alas for sorow’) and ‘propudor’ (for ‘Alas for shame’).

The Catholicon is important as a source of Middle English words, some of them quite unusual and specific to Yorkshire dialect, and as an early ancestor in the English lexicographical tradition.  Its contemporary cultural significance is also considerable: the development of a sophisticated tool for the learning of the Latin language is an indicator of important changes in educational organisation, of its secularisation and spread outside traditional environments such as cathedral schools and monastic almonries.  The Catholicon – designed for oral as well as written purposes – sheds fresh light on the form that that teaching might have taken.  Its availability now to scholars in its original and unmediated form promises an exciting new chapter in Middle English and Latin studies.