We are delighted to tell you that the magnificent Kerdeston Hawking Book is now available on our Digitised Manuscripts site (Add MS 82949). This manuscript, together with the related Kerdeston Hunting Book (a fragment of 5 leaves, now Additional MS 82948), was in the collection of HRH Prince Henry, Duke of Gloucester, until his death in 1974, being acquired by the British Library in 2007. 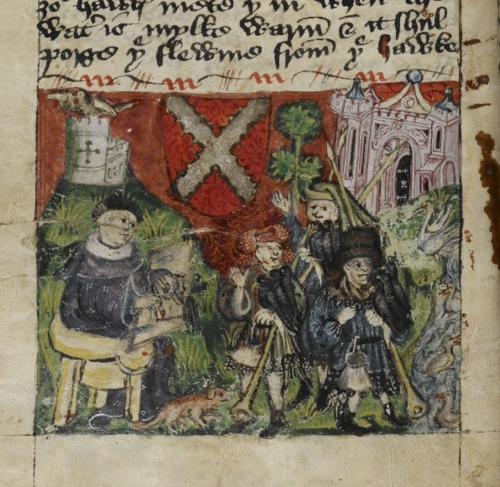 Ypocras sitting on a stool writing with a dog at his feet. Three hunters, each with a beating stick and three hawks on his arm stand in front of Ypocras. Two buildings are at the top of the miniature, with Kerdeston's arms in the upper centre, from the Kerdeston Hawking Book, England (Norfolk): London, British Library, MS Additional 82949, f. 31v

The library of a 15th-century country gentleman would not have been complete without books on everyday matters such as estate management, heraldry and hunting, sometimes compiled as one volume. The Middle-English ‘Kerdeston Hawking Book’ is from the library of Sir Thomas Kerdeston of Claxton, Norfolk (d. 1446), whose first wife, Elizabeth, was daughter of Sir Edward Burnell, one of the English soldiers killed at Agincourt in 1415. It is a tall, thin book, probably designed to be carried around, and the pages are worn, indicating that it was well-used  by its owner.

The first leaf of the book has two full-page images, one on either side, unfortunately rather damaged by cuts and rubbing. The first shows a man in very fine hunting dress, thought to be of the Master of the Hunt, with his pouch at his waist and hawk on his wrist, riding towards a stream with fish and fowl in it.

The Master of the Hunt, shown on horseback, and, below, a hermit with beggars, from the Kerdeston Hawking Book: London, British Library, MS Additional 82949, f. 1r

On the verso of the first folio is an image showing a king in full regalia, holding three hawks on a leash in his right hand. In the lower third of the page are three hawksmen with poles, lures and pouches. The seated scholar in the middle has an open book and a scroll that reads ‘ypocras’. This refers to the first treatise in the book, a dialogue between Ypocras (Hippocrates) and Cosma, a Roman senator, on falconry. 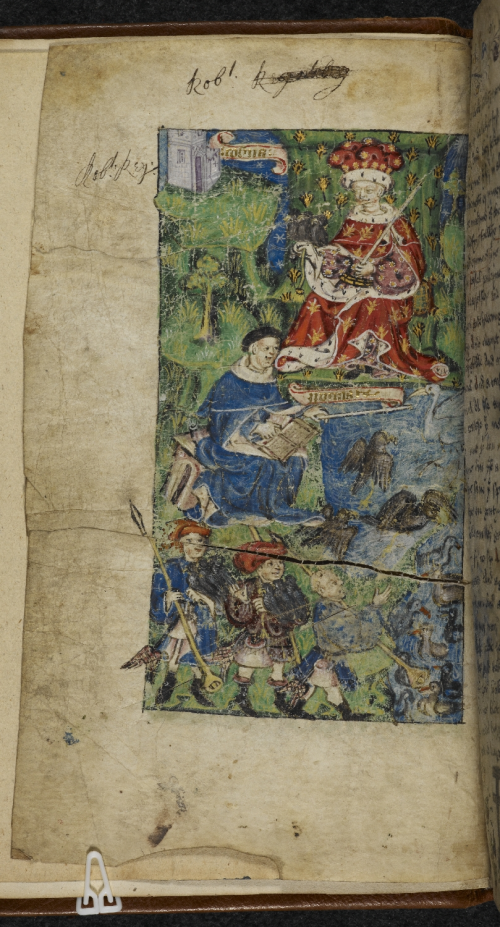 The book contains advice on how to care for falcons and hawks, with remedies and recipes for salves to keep their plumage in good condition, as well as instructions on their training and management.  The margins are decorated with images of birds, animals and the Kerdeston coat of arms.

Marginal image of a dog with a duck in its mouth, from the Kerdeston Hawking Book: London, British Library, MS Additional 82949, f. 45r

No English book on hunting would be complete without foxes and hounds, and here they are:

You can read more about the Kerdeston Hawking Book here: