The British Library’s amazing new exhibition, Comics Unmasked, was opened last week by TV presenter and comics fan Jonathan Ross. Talking about the oldest item on show, an early printed version of the Bible with graphic images, Jonathan commented that the Bible can be a great source of material for comic books. We in Medieval Manuscripts know this only too well!

Of course, it all began with manuscripts. Here are some early examples.

The Old English Hexateuch – How many modern comic books have dancing camels?

This 11th-century Old English version of six books of the Old Testament is filled with graphic depictions of the well-known stories, like the series below showing Adam and Eve’s expulsion from the Garden of Eden: 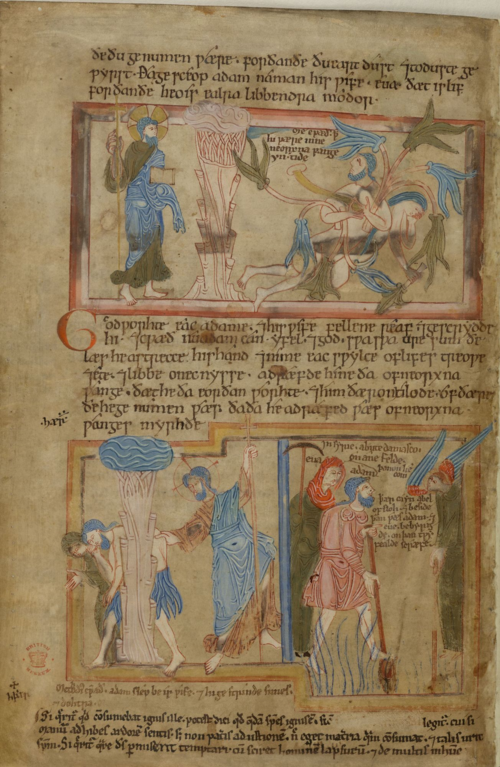 We had to include this picture of the dancing camels! 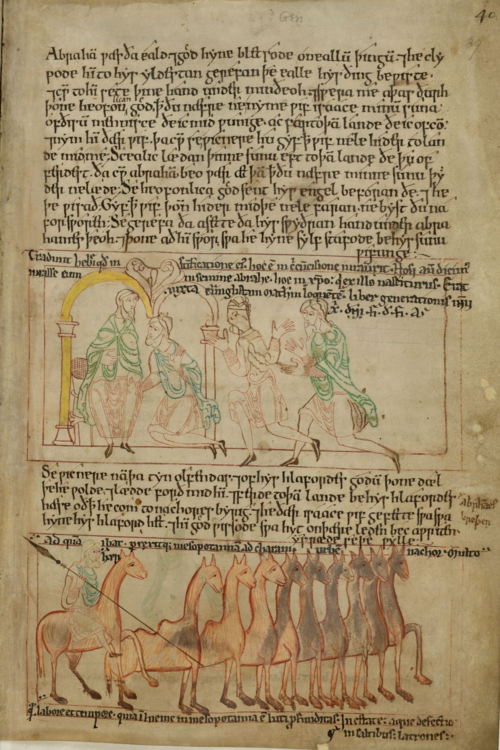 Sometimes described as England’s first graphic novel, this book tells stories from the Old and New Testament in a series of pictures with captions in Anglo-Norman French. There is some interesting material that didn’t make it into the authorised version of the Bible. The page below tells about Joseph’s reaction when he hears Mary is having a baby: the banners contain the dialogue, like speech bubbles in modern cartoons. In the second image, Joseph, whose friends have been telling him some home truths about his wife, is touching Mary’s stomach and asking her some awkward questions. Mary protests, ‘No, really don’t worry, I have never committed a bodily sin’. Of course he doesn’t believe her, but fortunately an angel drops in to reveal the divine plan and he has to eat humble pie.

Episodes from the life of Christ are also given the comic-book treatment: 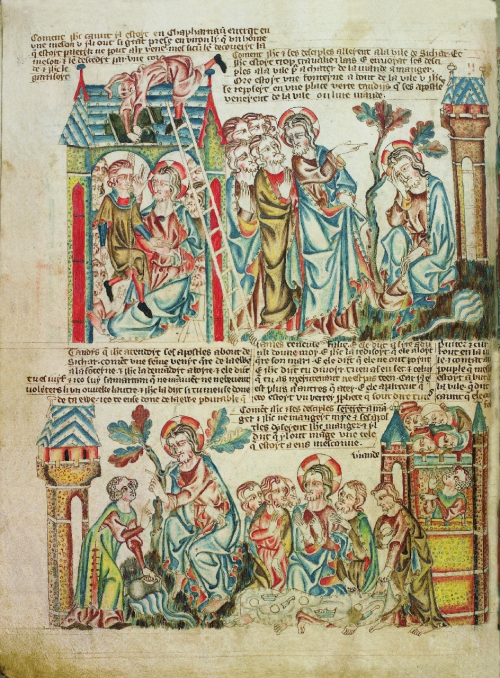 The healing of the paralysed man; Christ rests by a well; the woman of Samaria; the disciples eat but Jesus will not: London, British Library, MS Add 47682, f. 24v

Egerton Genesis Picture Book – the Prequel, or where it all began

Egerton MS 1894, better known as the Egerton Genesis Picture Book, tells the creation story in a series of images: 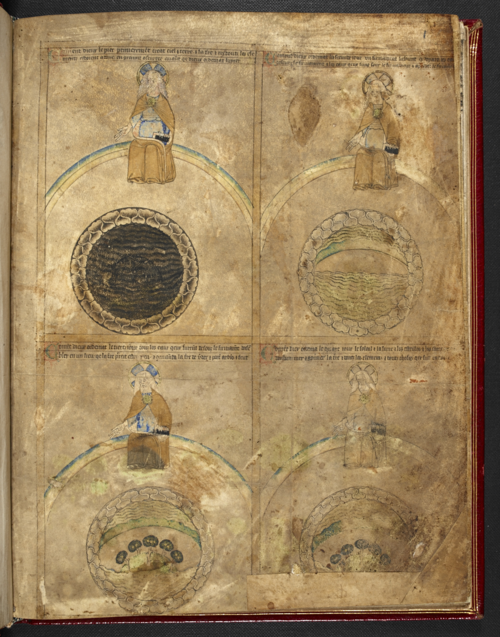 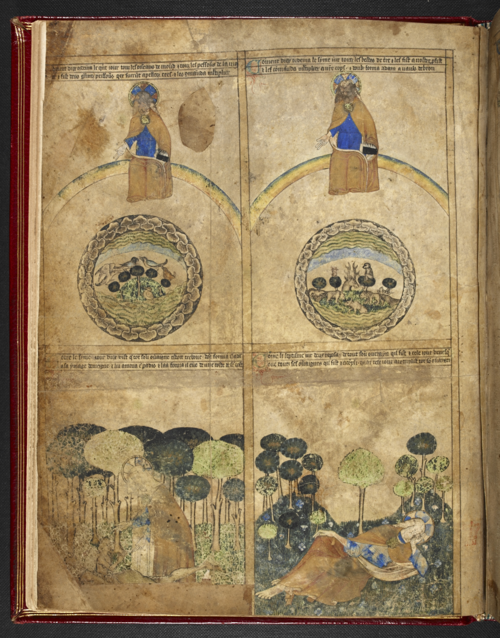 You can read more about this manuscript in our blogpost A Medieval Comic Strip.

The life of Moses is one of the great stories of all time, providing material for comics and movies such as the Charlton Heston epic and Spielberg’s ‘Prince of Egypt’. The Queen Mary Psalter contains a remarkable series of Old Testament stories told in a series of 223 pictures with captions in French. Included in the series is the Moses story. Here are some of the episodes: 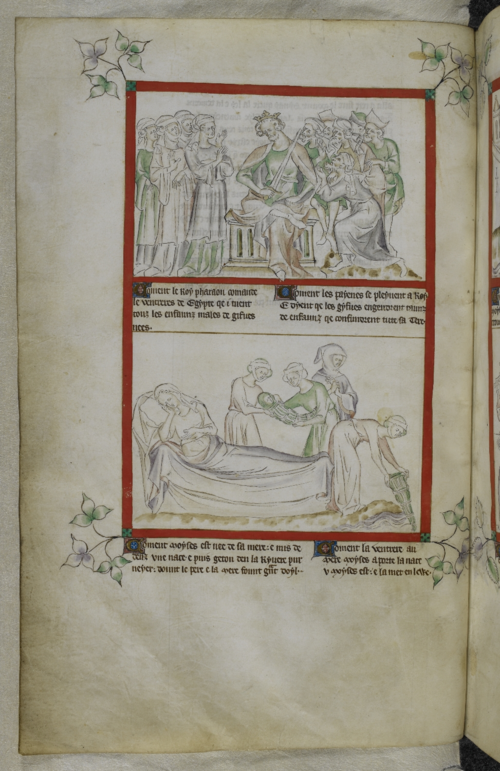 Miniature in two parts of the king of Egypt demanding that all Jewish infants be killed (above); of the birth of Moses, and Moses placed in a basket and left on the banks of the Nile (below), England (London?), c. 1310-1320: London, British Library, MS Royal 2 B VII, f. 22v 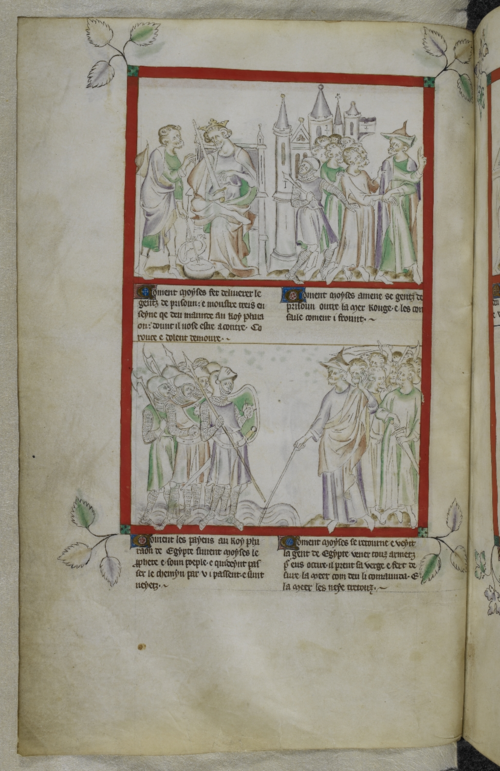 Miniature of God giving the laws to Moses for a second time (above); and of Moses showing the laws to the Israelites (below): London, British Library, MS Royal 2 B VII, f. 26r

We'll feature more medieval "comics" on this blog in the next few weeks. We're having great fun putting this list together, and would welcome more suggestions via @BLMedieval. Meanwhile, you can see our Comics exhibition in London until 19 August 2014, book your tickets online here.