The third phase of the British Library Greek Manuscripts Digitisation Project began in April of this year. Over the next twelve months we will be adding over 300 more Greek items to Digitised Manuscripts. While the first batch will go live at the end of June, today we thought we’d give you an early glimpse at the project. We have just uploaded to Digitised Manuscripts two very special manuscripts of the New Testament, Add MS 28815 and Egerton MS 3145. These items are a fitting place to start our project since they were once part of the same manuscript (Gregory-Aland 699).

The manuscript itself was created in the mid-10th century, probably in Constantinople. It originally contained portraits of the four Evangelists, one before each Gospel, but now only the portraits of Luke and John survive (along with another bonus portrait of Luke placed before the Acts of the Apostles): 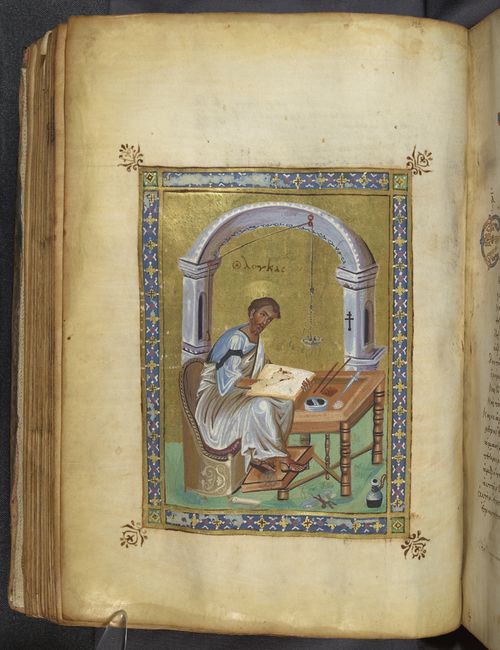 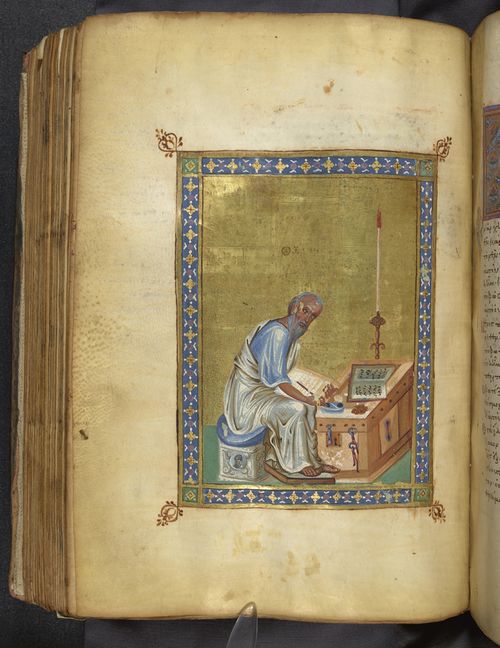 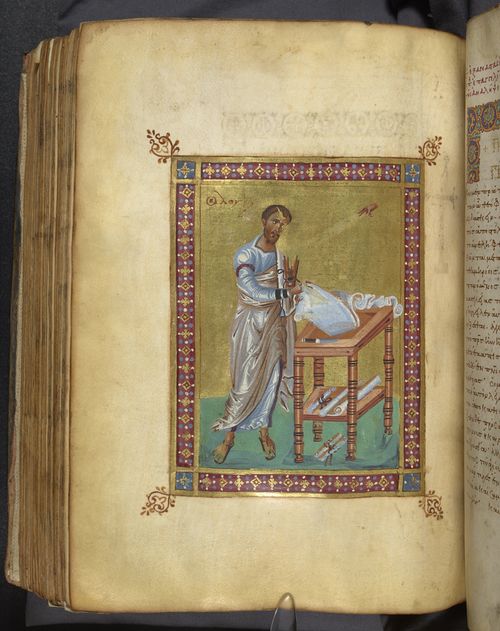 In addition, it seems as though the manuscript originally contained chapter titles written in gold on purple parchment. These leaves were mostly torn out, but two stubs remain between f. 75 and f. 76, and traces of the chapter titles can still be seen. Unfortunately, for conservation reasons it was only possible to image the first of these two stubs.

Both manuscripts are also blessed with interesting bindings: Egerton MS 3145, when it arrived at the British Museum, was housed in a binding of stamped brown leather over beech boards, covered with green velvet (now kept as Egerton MS 3145/1). This binding however seems to have been made for a larger manuscript. 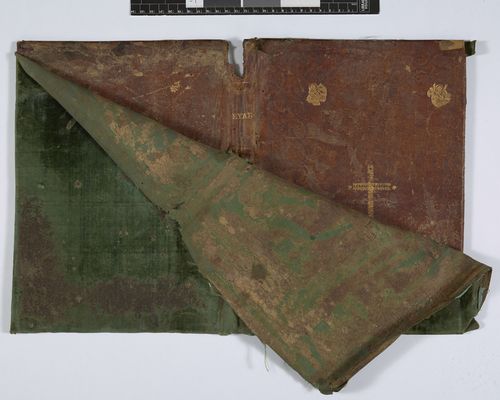 The cover of Add MS 28815, however, has been the subject of a great deal of scholarly attention. Affixed to the binding are silver-gilt plates worked with figures. While these are post-Byzantine, they probably were based on a 14th-century template. In the centre is a gilt plate with the figures of Jesus, the Virgin Mary, and John the Baptist. The plates at the top and the bottom depict the four Evangelists and Peter and Paul. The plates on the side have proven more controversial: it was long believed that they depicted the overthrow of the heretics Nestorius and Noetus. In a recent article, however, Andreas Rhoby has argued that they actually depict scenes from the life of St Demetrius. As always, you can find out more on the British Library catalogue entry, with further bibliography. 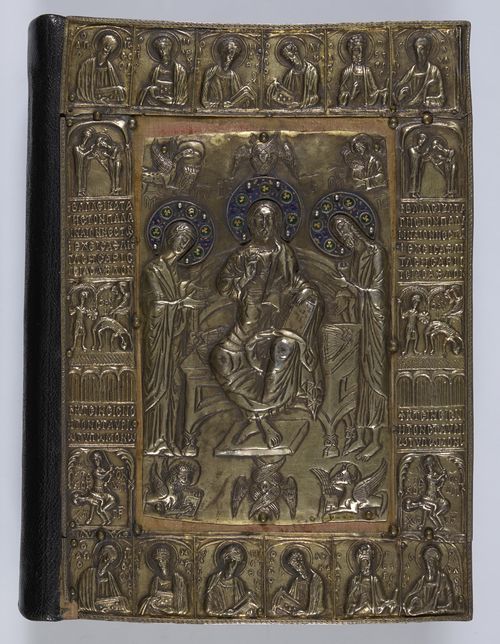 We can’t end without giving some background as to how these two manuscripts came to be in the British Library. Add MS 28815-28830 were acquired from Ivor Guest, 1st Baron Wimborne, in 1871. While the exact provenance of Guest’s manuscripts is not entirely clear, two (Add MS 28817 and Add MS 28821) can be located in the general region of Epirus, while the iconography and binding of Add MS 28820 and to a lesser extent Add MS 28819 may point to origins in that same area. It is quite likely that the entire collection was acquired in Epirus, probably in Janina.

It may well be that the dealer from whom Burdett-Coutts acquired her manuscripts was the same person who sold manuscripts to Guest, and further research in this area could tell us quite a bit more about the prior history of these two manuscripts. We can be thankful, at least, that they have been reunited in the same institution for the past seventy-six years, and that they can now be viewed online on Digitised Manuscripts.

Wonderful images. But I'm not sure that the purple leaves were for canon tables. On the lower part of the stub, next to the numerals, is the abbreviation Πε, for περι, which is how the chapter titles (kephalaia) usually begin. On the verso, the remains of the nomen sacrum for Christ shows that there was also text. So this surviving part looks more like a list of chapter titles than canon numbers. Although it is possible that canon numbers were used for chapter titles, the sequence on the top half of the stub ending ΠΓ (83) indicates that these are kephalaia numbers rather than Ammonian sections, since all the Gospels have more than 83 sections.

My apologies, I mistakenly wrote canon tables instead of chapter titles (which is what the catalogue entry states). I've amended the post accordingly.