Every June 16, devotees of James Joyce in Dublin and around the world celebrate the anniversary of the events described in the novel Ulysses. While a book set in 1904 and first published in 1922 is a little bit beyond the scope of Medieval and Earlier Manuscripts, it marks the culmination of the long journey of the Homeric character Odysseus (Ulixes in Latin, hence Ulysses) through many different roles in art and literature. Most medieval depictions of Ulysses do not come in manuscripts of Homer, however, but in accounts of the Trojan war and its aftermath.

In the Iliad, Odysseus is given a prominent supporting role: he is a brave and fearsome warrior, as well as a clever strategist. Here he is with Nestor and Diomedes attempting to persuade Achilles to return to the fray: the Embassy scene told first in Iliad 9, but here accompanying the Histoire ancienne jusqu'à César in the mid-14th-century Royal MS 20 D I: 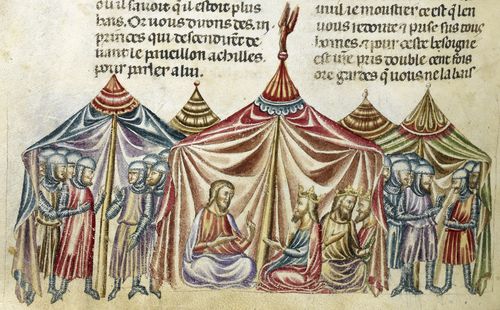 In the Odyssey, he gets top billing, and as the hero, is depicted in a largely positive light. In perhaps his most famous adventure, he blinds the Cyclops: here the illumination is found in Christine de Pizan’s L'Épître Othéa, in a French manuscript of the 1410s: 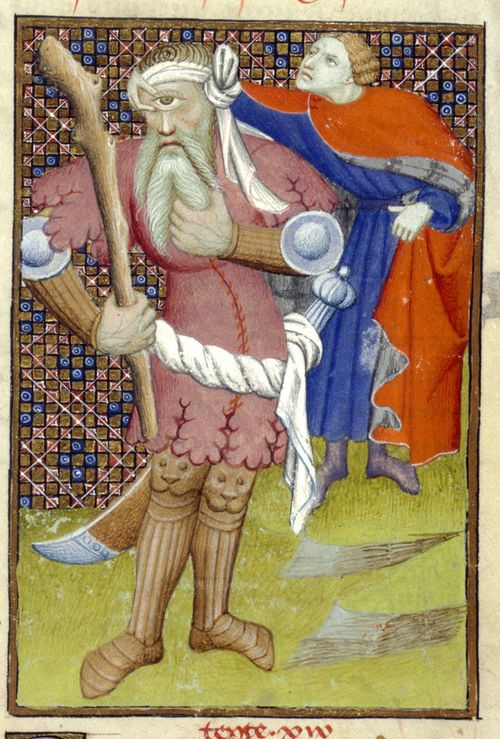 Shortly after the Homeric era, however, the Odyssean backlash begins, and he becomes something of a stage villain, before being described in Book Two of Virgil’s Aeneid as scelerumque inuentor (the inventor of wicked deeds) and dirus Ulixes (terrifying Ulysses), who played a key role in the tragic fall of Troy. Here is a picture of the Trojan Horse from a late 15th-century manuscript of Virgil: 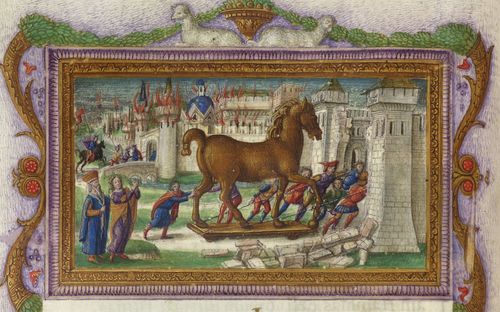 In the medieval era, the figure of Ulysses is largely based on that portrayed in the late antique epitomes of the Trojan saga – the De Excidio Troiae attributed to Dares Phrygius, and the Ephemeris Belli Troiani attributed to Dictys of Crete. In the latter work, in particular, Ulysses is not depicted in a favourable light. Given the fact that these two works were key sources for the medieval tales of Troy, this had an impact on how Ulysses was portrayed.

One addition made by Dictys was the account of a recurring dream had by Ulysses, in which a figure of great beauty keeps appearing to him, before a signum is thrown at him. Here is a depiction of that dream, from a late 15th-century manuscript containing a French version of the Trojan matter (Le recoeil des histoires de Troyes): 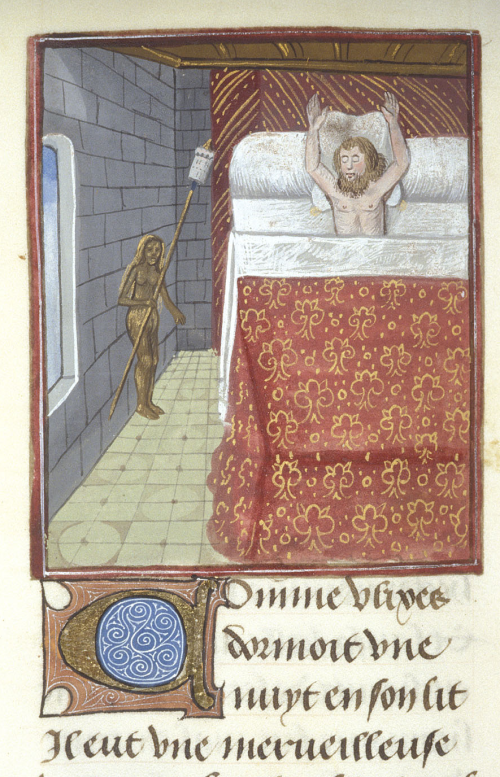 There are of course many other accounts of Ulysses and his adventures to be found in British Library collections. But since we began with Joyce, it is fitting to end with another Irish account of Ulysses (though it is not, sadly, to be found amongst our holdings). The Early Irish tale Merugud Uilix Maicc Leirtis (“The Wanderings of Ulysses son of Laertes”) was found in a Stowe manuscript now in the Royal Irish Academy Library in Dublin. You can read the Irish original on the excellent CELT website. Unlike in many other medieval traditions, here Ulysses is depicted in a positive light, and special prominence is given to his faithful dog Argos (who in the Irish account is female), who joyfully recognises Ulysses and confirms who he is (a scene very different from the Homeric original!) Unfortunately we could not find any pictures of Ulysses and his dog. There is, however, a friendly and rather shaggy-looking dog in this picture, who almost appears to be greeting the Greek soldier climbing out of the Trojan Horse. Perhaps this is a nod to the story of Ulysses and Argos? 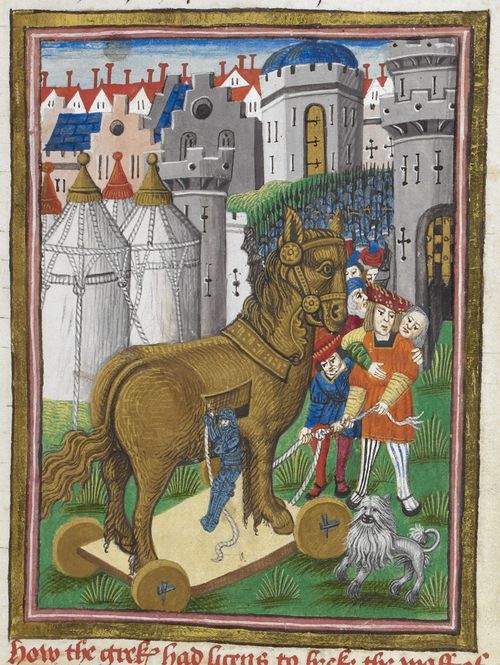