There is simply no earthly honour greater than a British Library Medieval Manuscripts blog post in your memory.  So it is with all due reverence – and a selection of manuscripts from our collections – that we observe the feast day of Benedict of Nursia, saint and progenitor of the first monastic order. 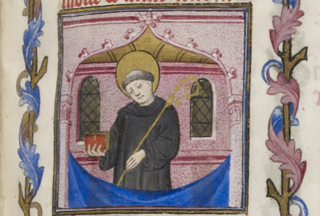 Born c. 480 in Nursia, Benedict was educated in Rome but abandoned his studies in order to pursue a spiritual life.  After living variously as a hermit or with other religious recluses, and narrowly escaping being murdered by a local priest in Subiaco, he founded Monte Cassino with his followers and there died, tradition has it, on 21st March 543.  11th July marks the translation of his relics to the abbey of Fleury (those of his sister, the wonderfully named Scholastica, were taken at the same time to Le Mans). 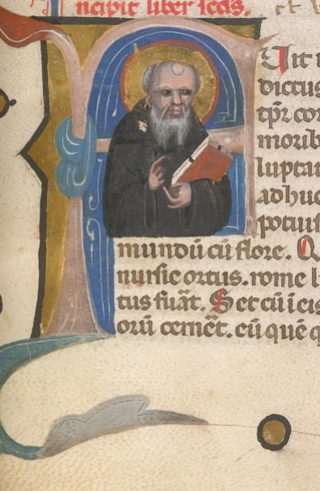 Detail of an historiated initial depicting St Benedict, from the opening of the second book of Gregory the Great’s ‘Dialogues’, Italy (?Bologna), 1st half of the 14th century, Burney MS 319, f. 22

Scant details of Benedict’s life survive.  The main source is the second book of the Dialogues of St Gregory the Great, which recounts mainly miraculous events intended to edify and inspire rather than specific details suited to historical biography.

Benedict’s principal literary legacy was his Rule, in which he set forth the practical and spiritual guidelines by which communities of monks ought to live.  Composed c. 526, it comprises 73 chapters, covering such diverse matters as the qualifications required of an abbot of a Benedictine monastery, the twelve ways in which a monk can seek humility, how a monk should pray, read and eat and behave towards his brothers, a scale of punishments of increasing severity for misdemeanours, and the reception and treatment of guests.  A chapter of the Rule was read aloud to the monks at their daily convocation: hence ‘chapter meetings’, and the ‘chapter house’ in which they took place.

The Rule survives in three main textual versions – ‘pure’, ‘interpolated’ and ‘received/mixed’.  The British Library possesses the oldest surviving copy of the ‘received’ recension, shown above: it dates from c. 1000 and the presence of a fourteenth-century pressmark suggests that it was later owned by (and possibly originally written and illuminated at) St Augustine’s, Canterbury.  The unusually narrow format indicates that the manuscript may have been made to fit ivory covers recycled from an older book. 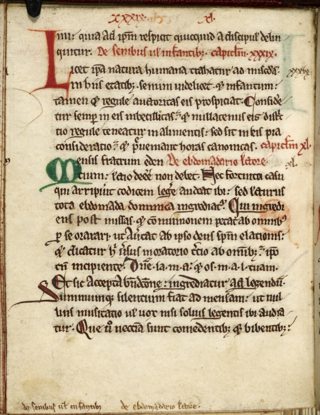 Since the Rule was an essential text for the monastic life, it was copied and circulated very widely, and the British Library possesses numerous copies.  The above example is taken from Harley MS 948, and contains Chapters 38 and 39 (mislabelled as 39 and 40): the first dealing with the care of elderly brethren and child oblates, the second with the duties of the monk appointed each week to read to brothers in the refectory while they ate in silence.  Instructions to the rubricator can still be seen at the foot of the page.  Old English translations of the Rule are found in two Cotton manuscripts (Titus A IV, Faustina A X part B) and there is a Latin-Middle English bilingual version in another (Claudius D III). 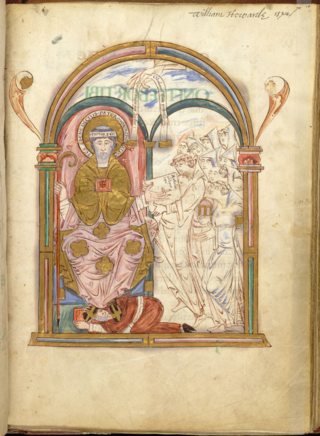 As one of the major saints of the medieval Christian church, St Benedict was frequently depicted in liturgical or devotional texts, such as this Psalter from Christ Church, Canterbury.  It was produced a little later than the Rule from neighbouring St Augustine’s, and was written by one of the cathedral's monks, Eadwig Basan.  The full-page miniature of St Benedict – at first glance apparently incomplete – recalls that of St Æthelwold in his eponymous Benedictional (Add MS 49598, 963x984).  Fully illuminated, the enthroned figure of St Benedict on the left sits in stark contrast to the more simply tinted figures of monks on the right – as in the Benedictional, likely a deliberate artistic decision that privileges the founder of a monastic order beside whom its followers at Canterbury are metaphorically and visually pale imitations.  Only one of them is fully coloured: a figure, perhaps Eadwig himself, dressed in dull brown monastic robes and girded with a ‘belt of humility’ (zona humilitatis), and kneeling in adoration at St Benedict’s feet.  St Benedict, described in his nimbus as ‘father and leader of monks’ (pater monachorum et dux), is bestowing upon the Christ Church monks a copy of his Rule, the opening words of which are clearly visible in the open book.

Cuttings from late medieval Italian liturgical manuscripts have been attracting quite a bit of interest among followers of this blog recently, so we conclude with two especially fine historiated initials from Benedict’s native country. 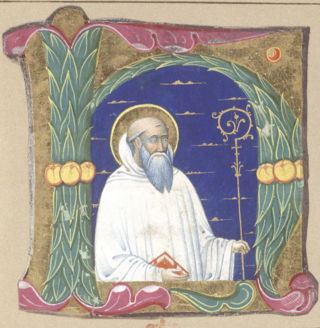 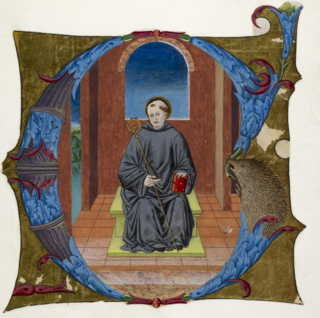