It is a curious fact that at present the Mayerne manuscript (Sloane MS 2052) is probably physically closer to its author than at any time since his death.  Visitors to the National Gallery exhibition Making Colour will be able to see this fascinating compilation of writings and observations on painting and the technology and chemistry of art by Sir Theodore de Mayerne (b. 1573, d. 1655) – and, if they choose to stroll across Trafalgar Square, a monument to the man himself in the church where he was buried, St Martin-in-the-Fields.  This is the latest in a series of exhibition loans this year that has seen British Library manuscripts travelling near and far to exhibitions at the British Museum here in London, the National Library of Australia in Canberra, and the Museum Kunstpalast in Düsseldorf.  It is also the most recent addition to Digitised Manuscripts.

Physician to French and English royalty, English and foreign ambassadors and reputedly the most expensive doctor in London, as well as author of a travel guide and a contributor to the first authorised pharmacopeia of the Royal College of Physicians, compiler of a cookery book, diplomatic agent and experimental chemist – Sir Theodore de Mayerne led a varied, distinguished life.  He was born on 28th September 1573 in Geneva to Huguenot parents.  A student of the universities of Heidelberg and Montpellier, Mayerne embarked on a medical career in Paris at the close of the sixteenth century, treating members of the French royal family.  In 1605, he experienced a stroke of good fortune: succeeding where other physicians had failed, he cured Lord Norreys of Rycote (a young kinsman of Robert Cecil, earl of Salisbury), who had fallen victim to an epidemic in the city.  With a visit to England in the spring of 1606, this medical success laid the foundations for his emigration to England five years later: he secured the post of chief physician to James I, just as the religious atmosphere at the French court began to sour.

Mayerne spent the next forty-four years in England, though he travelled regularly to the continent and in 1620 purchased the estate of Aubonne, not far from Geneva.  Contemporaries remarked upon, and several likenesses bear witness to, Mayerne’s corpulence.  Accounts relate that he did not eat regular meals, but preferred to graze whenever he fancied at a table that was kept well-stocked for this purpose.  He died at his home in Chelsea aged eighty-two on 22nd March 1655, apparently as a consequence of drinking bad wine.

For all his considerable medical achievements, Mayerne is remembered today principally for his chemistry experiments and observations.  Although they had a better reception in England, Mayerne’s chemical remedies were frowned upon by the Parisian medical establishment and his approach was, by the standards of the day, rather unorthodox.

Mayerne’s notes on the mixing of colours, taken from Peter Paul Rubens while sitting for his portrait, Sloane MS 2052, f. 150r

It was this preoccupation that led him to make extensive notes over a quarter of a century upon artistic techniques and the preparation of pigments and oils, many gleaned first-hand from leading artists, artisans and craftsmen of the day.  The notes shown above were taken down by Mayerne almost certainly while he sat for his portrait with Peter Paul Rubens. 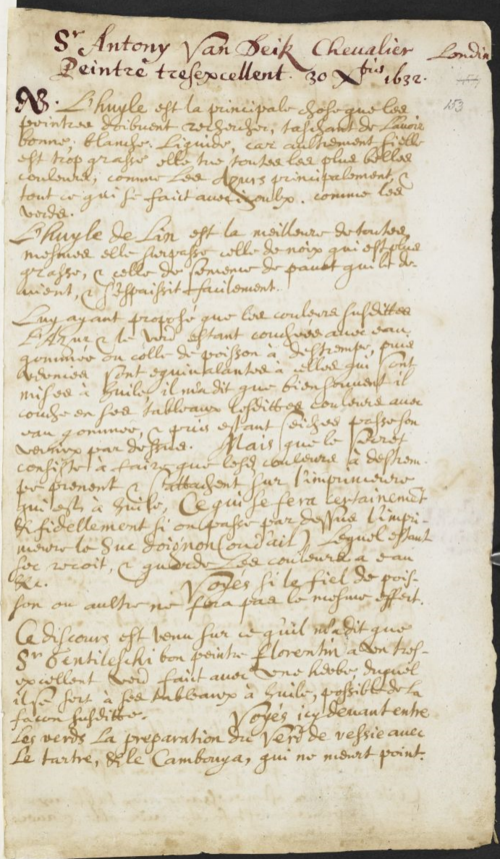 These notes on oil are from an interview with Anthony van Dyck – whom Mayerne describes as a ‘Peintre tres excellent’ – on 30th December 1632. 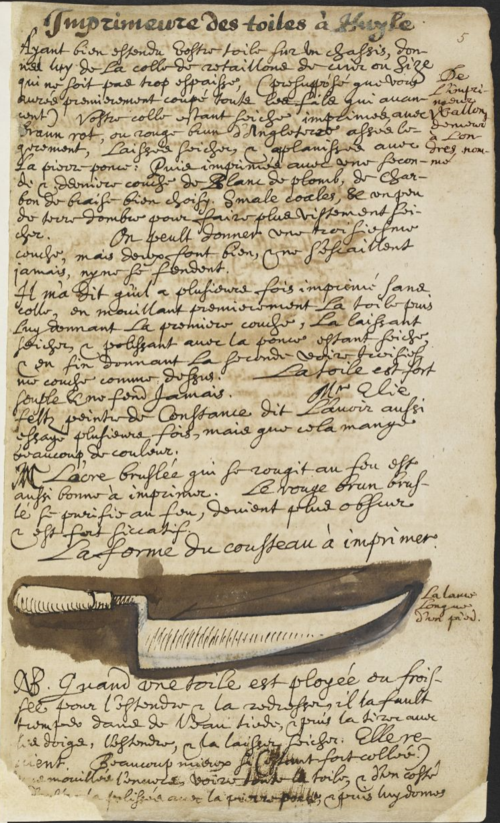 Every stage of the painting process was of interest to Mayerne, even the preparation of the canvas: the above illustration showing the shape of the knife used for this purpose, with a marginal note that such blades were a foot long.  Elsewhere, he recorded van Dyck’s experiments with different undercoats: fish glue caused the paint to flake off and ruined the colours; amber varnish thickened the paint too much; and bismuth white with oil was suitable only for illuminating (f. 10v).

Sketch of an artist’s palette and the location of colours, Sloane MS 2052, f. 90v 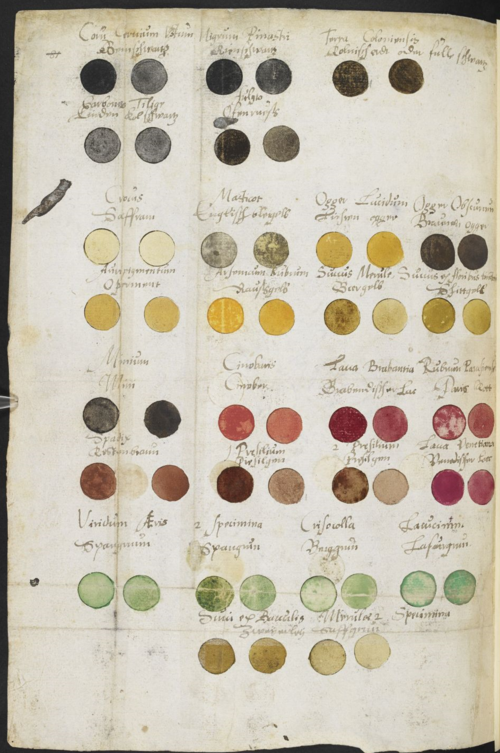 Most striking are a few leaves in the middle of the manuscript that are filled with neat circles of colour.  Resembling modern-day swatches, these leaves record Mayerne’s testing of the preparation of different pigments: in particular, what formulations best preserved the colour and did not crack as they dried. 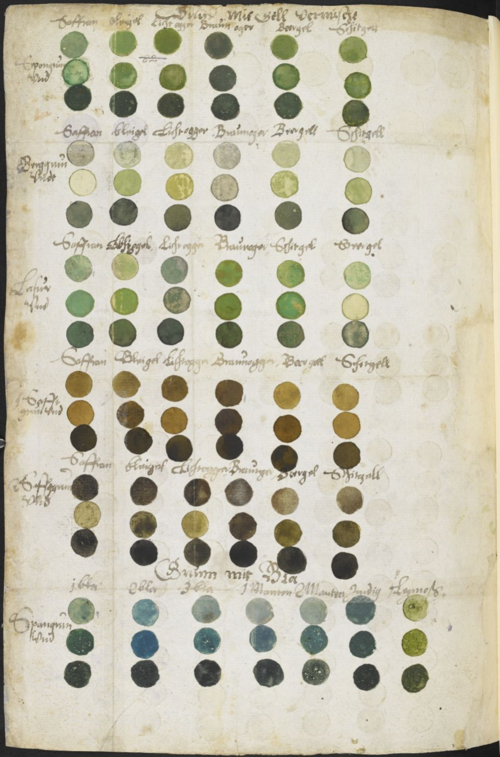 The Mayerne manuscript is an outstanding witness to the diverse intellectual pursuits of a remarkable individual at the heart of court life in Jacobean and Caroline England.  It is an invaluable record of the seventeenth-century ‘medical arts’: the application of scientific methodologies to the study of artistic techniques, and the contribution that painting could make to the development of chemical knowledge.  For Mayerne, there were no ‘two cultures’: he used a broad palette, drawing on science and art, individually and in combination, to make discoveries of benefit to both.  It is an approach that we in the twenty-first century would do well to imitate.

Making Colour is at the National Gallery, Sainsbury Wing, until 7th September 2014.