The Journey of a Greek Manuscript

One of the most exciting aspects of working with manuscripts is finding signs of former owners, and learning about how they used their manuscripts. Today’s manuscript, a copy of the Gospels in Greek, can only be linked to one certain owner, but there is quite a bit to say about its earlier history nonetheless.

Additional MS 24376, a fine copy of the Four Gospels in Greek (only lacking the last few words of John), can be dated to the fourteenth century on palaeographical grounds. As is often the case, however, the scribe simply wrote the text, and left gaps for illuminated headpieces and initials at the beginning of each Gospel, and for full-page miniatures of each of the Evangelists. For whatever reason, however, this was not done immediately, and even today the manuscript does not have any illuminated headpieces. 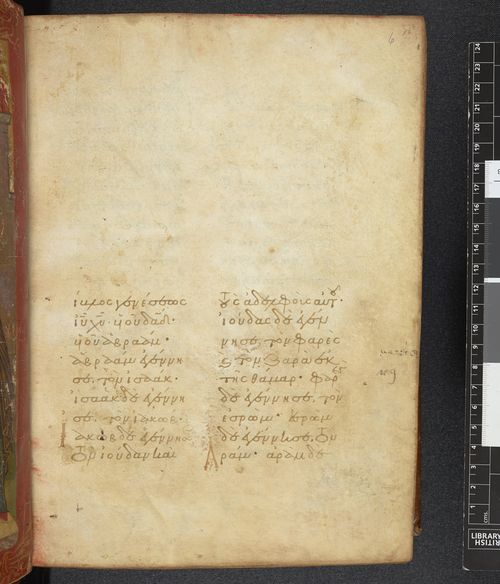 On f 6r, the gap for the headpiece is clear, and a later illuminator would have been expected to add the “B” of βἰβλος, the first word of the Gospel of Matthew.

A number of inscriptions which would doubtless help us to say more about the manuscript’s history on f 1r have sadly been erased. However, one inscription on f 1v remains, which states that the manuscript was purchased in Constantinople in 1528:

It is clear that shortly after this the manuscript moved north, as full-page miniatures were added some time in the late sixteenth century. These were created by a South Slavonic artist, and the figures in the miniatures are named in Slavonic. However, the text of the Gospels being written by the Evangelists remains Greek, as here in this illumination of Mark: 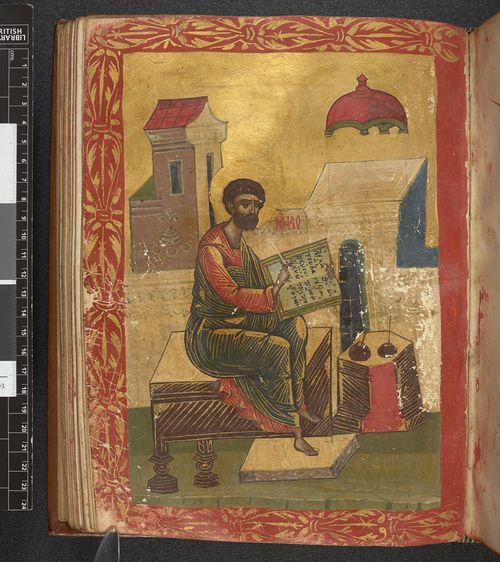 It’s worth noting that this full-page illumination lacks the traditional border that is more common in Byzantine Gospel manuscripts, and extending the decoration across the entire page is quite unusual. The manuscript likely stayed in the region of Northern Greece and the Southern Balkans after its illumination, as it was acquired by the British Museum along with a number of other manuscripts at the sale of Henry Stanhope Freeman, who had been Vice-Consul at Janina – now in Greece, then in Albania.

Yet there’s one more twist to the tale of this manuscript. At the beginning of the Gospel of Matthew, there is a miniature not of Matthew, but of the Annunciation: 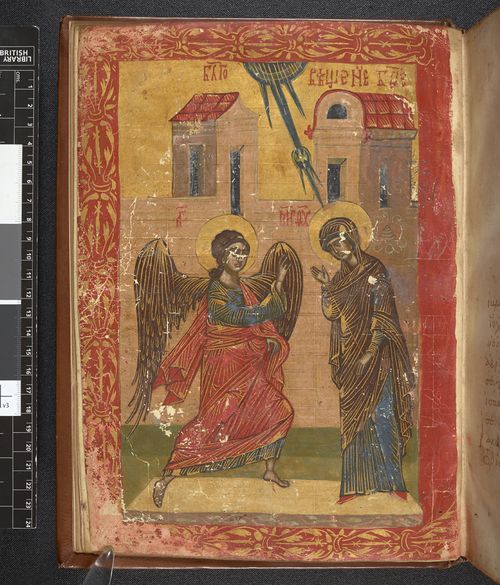 At some point, an owner must have noticed this and inserted a picture of Matthew to make up the loss, as f 292r consists of a woodcut on paper, inserted at a late stage. Where, when, and why this happened, however, remains unknown. 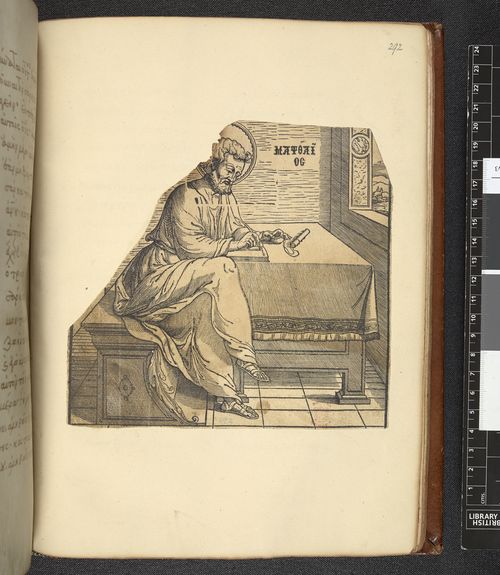