Readers of our blog will be familiar, by now, with the fact that some medieval illuminators had a special enthusiasm for marginal mockery.  No matter how overtly devotional the text, its margins were not protected from a carnival parade of visual humour.  In fact, it would be easy to get the impression that the more solemn the central scene, the better the scope for marginal antics. 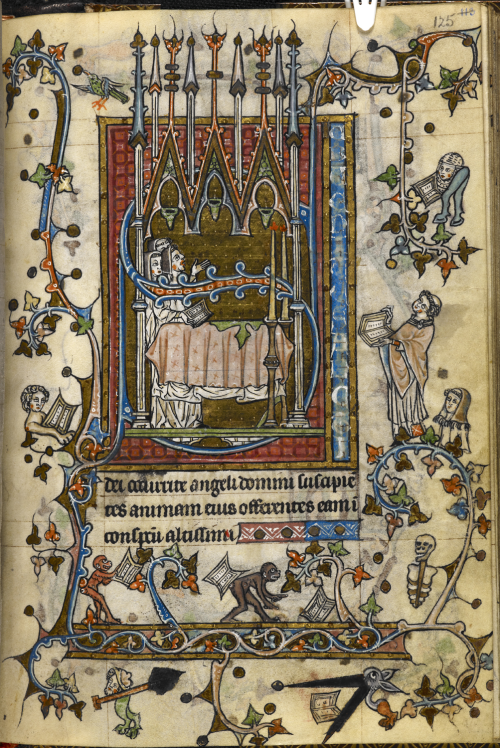 The Office of the Dead, included in many Books of Hours, is a series of prayers to be said in anticipation of death, at a funeral, or in remembrance of the deceased.  This solemn miniature depicts monks standing at the foot of a coffin and singing the Office from a book.  A good incentive for our book’s owner to pray, one might think, even if he or she was a bit distracted by the hybrid form of the grave-digger with his shovel at the bottom of the page.

More difficult to ignore, however, is the episode just beneath the central scene: one ape holds the same book, another uses his hindquarters as a lectern, and the antics of both are overseen by a laughing skeleton! 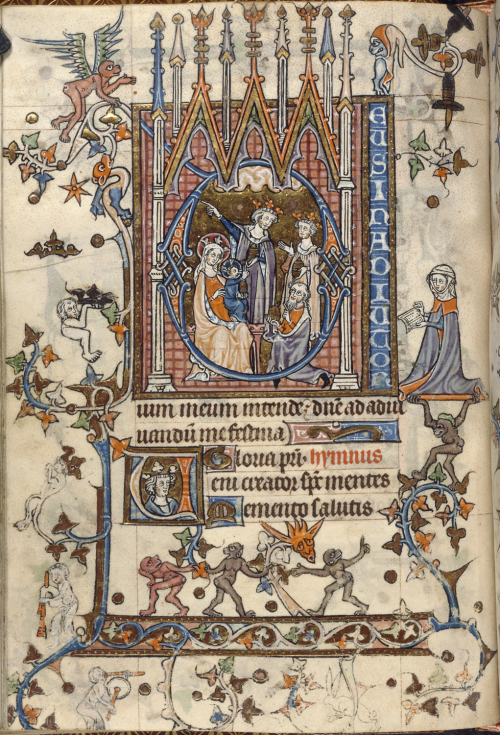 The Hours of Terce, with an historiated initial showing the Adoration of the Magi, Add MS 36684, f. 46v

Apes are frequently the cause of marginal inversion in this particular Book of Hours, such as at Terce (the third canonical Hour of the day) where the gestures of the Magi in the miniature of the Adoration are parodied by three apes in the bas-de-page (the space at the bottom of the page).

One grasps a leafy extension of the bar-frame, a vine with a bemused head, apparently the subject of their own ‘adoration’. 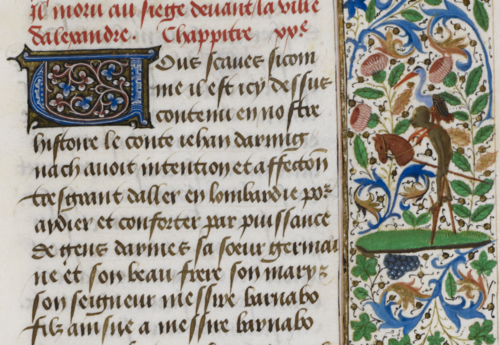 A quick glance, in fact, at the index in Lilian Randall’s Images in the Margins of Gothic Manuscripts reveals an astonishing 18 pages worth of ‘ape and…’ or ‘ape with…’ etc., many of which describe quite peculiar scenarios like the one above (some further examples from British Library manuscripts can be found in our post ‘Monkeys in the Margins’). 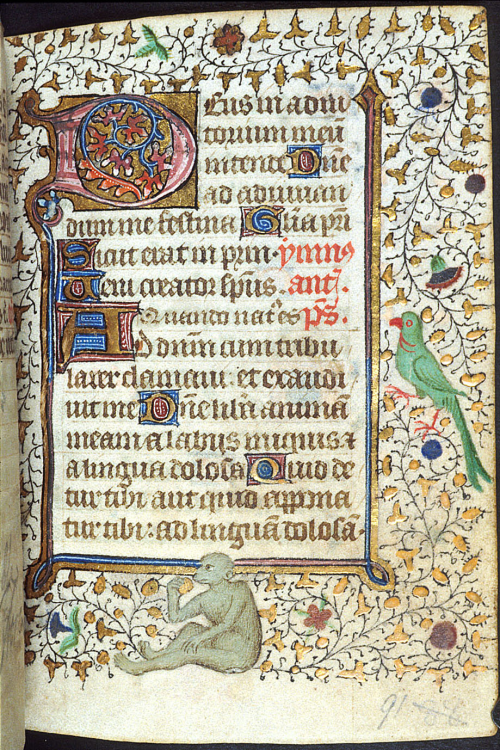 The Physiologus, a second-century Greek compilation of knowledge about animals and nature, attempted to redefine the natural world in Christian terms.  Apes, it was thought, were the creation of the devil, the Ape of God who mimicked His actions just as the ape mimicked human behaviour. 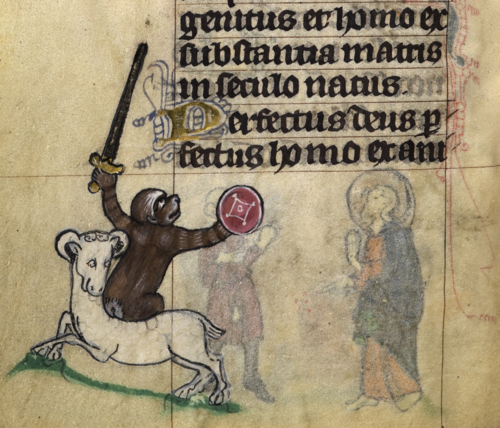 Detail of an ape riding a goat (both animals noted for being lascivious) and looking at part of the Athanasian Creed (‘Perfectus deo perfectus homo’ – ‘Perfect God, perfect man’), from the Maastricht Hours, Netherlands (Liège), c. 1300-c. 1325, Stowe MS 17, f. 81v (for more on this manuscript, check out our similar simian blog-post ‘Monkeying Around with the Maastricht Hours’)

From being a representation of the devil, the ape also morphed into an image of the devil’s victim, the sinner.  Imprisonments of the material world, such as lust and sin, were best conveyed with an ape.  Nothing said ‘sensuality’ and ‘unreliability’ better than a foolish ape holding an apple or riding a goat. The Bestiary developed these themes (see the copy in Royal MS 12 F XIII here) by giving an account of a mother ape fleeing hunters and carrying twins, her favourite in her arms and her least favourite on her back.

As she tires, she drops the child she likes while the one she dislikes will cling to her.  For the theologian John Scotus, this was an allegory of the human condition, with the favoured child representing worldly pleasures while the neglected one stood in for spiritual values. 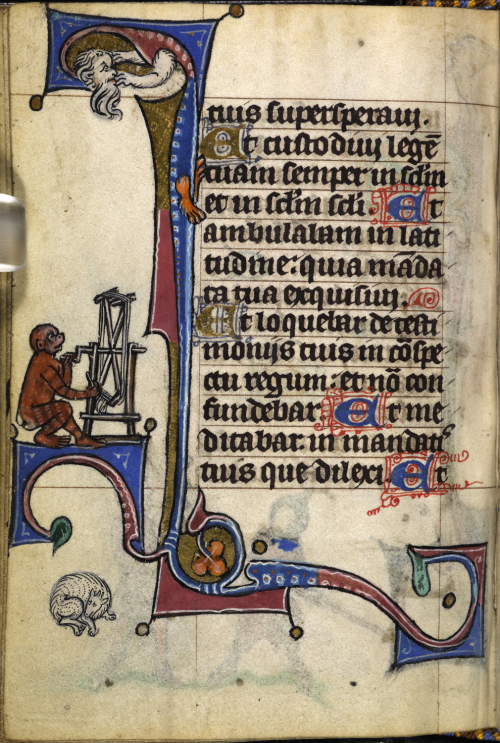 An ape engaged in the female pursuit of winding wool (with a goat, of course), Stowe MS 17, f. 91v

Classical writers such as Aristotle, Pliny the Elder, and Gaius Julius Solinus, all emphasised the ape’s propensity for imitation.

Detail of an ape wearing a bishop’s mitre and playing a trumpet, from the Bohun Psalter, England (?London), after 1356 and probably before 1373, Egerton MS 3277, f. 22v (for more on apes and other animals in this manuscript, see our earlier post ‘Lions, Monkeys and Bears – Oh My!’)

Indeed, Isidore of Seville, the expert on etymology in the Middle Ages, explained the derivation of simius (ape) from similitudo, remarking that ‘the monkey wants to imitate everything he sees done’. 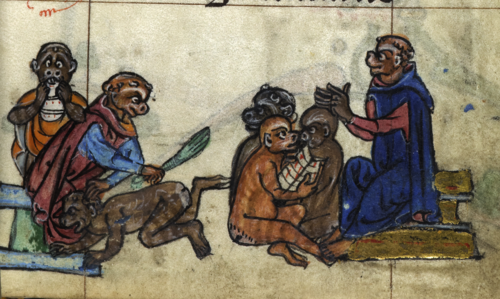 This group of apes is at school: one is being beaten by a master, three are being lectured, and another appears to be smelling the contents of a vase (probably a urinal), alluding to the common trope of the ‘ape as physician’ in the margins of medieval manuscripts. 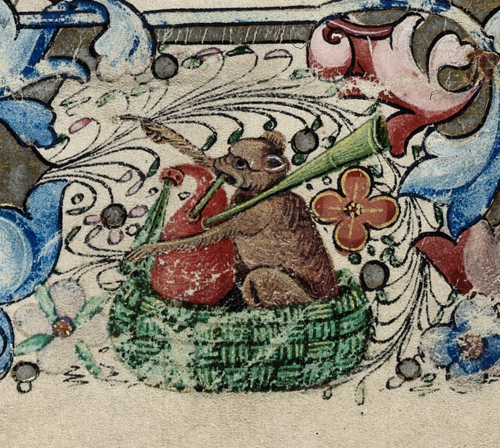 Finally, apes sometimes get up to such usual activities that they become one means (in combination with a range of distinctive motifs) of identifying individual artistic personalities.  These examples come from the oeuvres of two illuminators active in England in the third quarter of the fifteenth century.  The ape sat in a green wicker basket and playing the bagpipes is a trademark of sorts for a border artist known as ‘the Owl-illuminator’ (who is also known for using owls in marginal decoration). 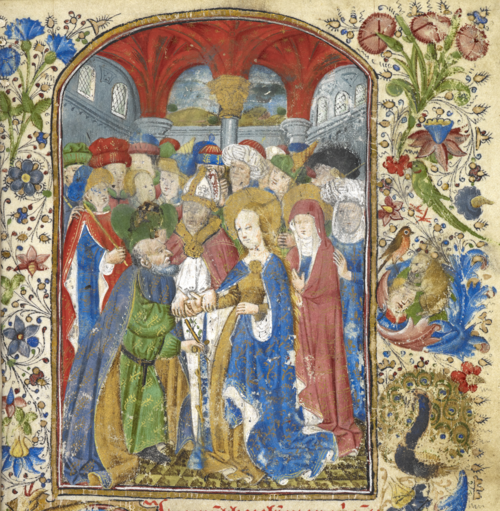 And then there is this very helpful ape, picking (and eating) fleas from a human head – a very unusual motif and one good indication that you are looking at work by ‘the Caesar Master’.

The contemporary ‘catch all’ term for animal antics in the margins of medieval manuscripts is thought to have been babuini (Latin) or babewyn (Middle English), meaning ‘baboon-like’ or ‘monkey-business’.  It is perhaps fitting, then, that Lilian Randall’s index of ape-activities runs to 18 pages.  Reading through the list, one can’t help but think of Bernard of Clairvaux’s words in 1125: ‘To what purpose are those unclean apes…?’