There has been some exciting news recently about Stonehenge.  The discovery of many new archaeological features around the site itself, including chapels, burial mounds, pits and shrines (which featured in a BBC documentary last Thursday), has emphasised that the famous stone circle should not be seen as an isolated monument but as part of a wider complex in the surrounding landscape. 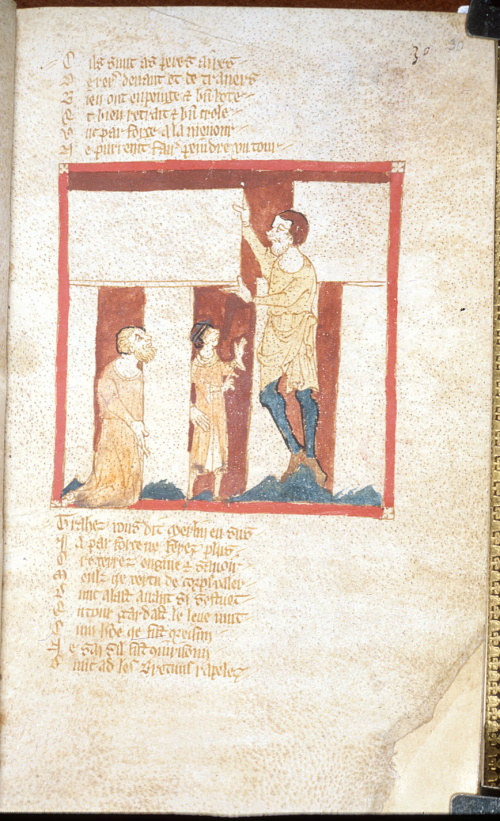 The British Library has a particular interest in Stonehenge, because it possesses the earliest known depiction of the monument, from a manuscript of Wace’s Roman de Brut, made in the second quarter of the fourteenth century.  The mythical figure of Merlin is shown assembling one of the famous sarsen trilithons by placing a lintel on top of two standing stones.  His actions are observed with wonderment by two mortals, emphasising Stonehenge’s legendary status as well as the mysteriousness of its purpose. 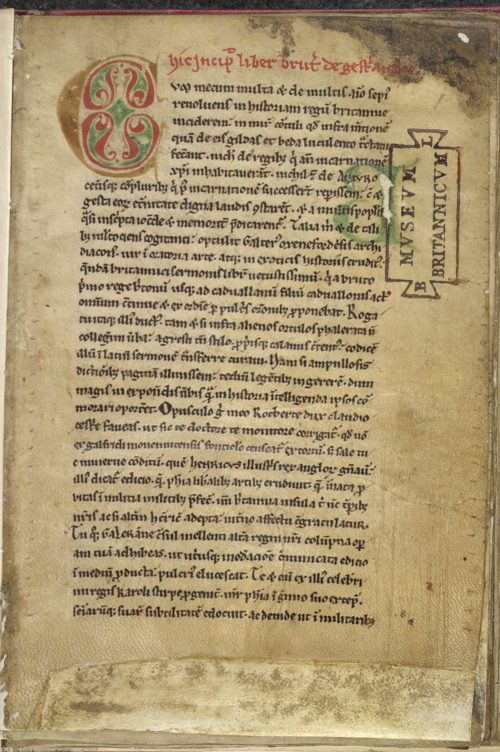 Earlier accounts, but not illustrations, of Stonehenge also survive in British Library manuscripts.  Wace wrote the Roman de Brut in French verse, using octo-syllabic couplets, and presented his work as a translation of Geoffrey of Monmouth’s Historia Regum Britanniae (though he included additional information).

Geoffrey claimed that Stonehenge was built on the orders of Aurelius Ambrosius, a mythical Briton king, with Merlin fulfilling the role of supernatural architect and building contractor.  Merlin had advised Aurelius that this would be a fitting memorial to 480 of his nobles who had been treacherously slaughtered by Hengist the Saxon around the year 470.

Although Geoffrey’s account is largely fanciful, there are implicit elements of it that have been borne out by modern archaeological study: for example, some of the stones were brought from far away (the bluestones used within the outer circle came from the Preseli mountains in Pembrokeshire), that it is related to stone circles in Ireland, and that there were burial sites in close proximity (as the recent discoveries have shown). The end of the prologue and beginning of the text, from a copy of Henry of Huntingdon, ‘Historia Anglorum’, England, Egerton MS 3668, ff. 2v-3r

Geoffrey’s account of Stonehenge is roughly contemporary with another mid-twelfth century history, the Historia Anglorum by Henry of Huntingdon.  Henry offered no explanation of why or how Stonehenge was built, but merely related (perhaps from second-hand accounts) that the stones were ‘erected after the manner of doorways, so that doorway appears to have been raised upon doorway’.  The description is puzzling at first, since Stonehenge never had a second storey, but it probably refers to a trick of perspective gained when one trilithon is observed through another. 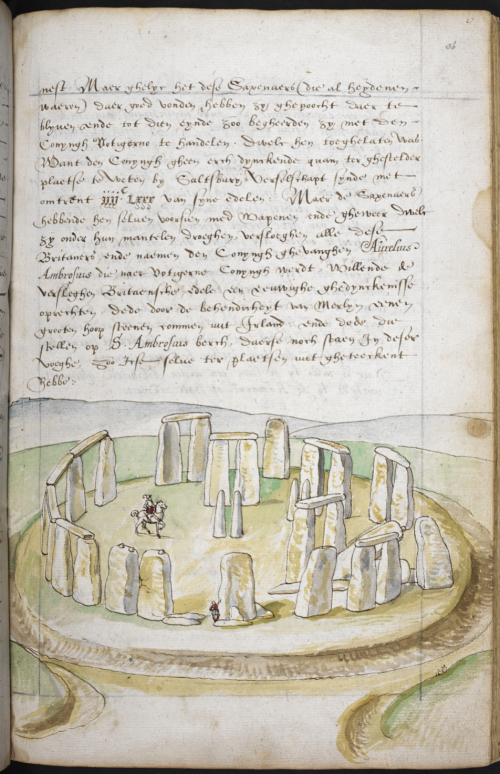 The British Library also possesses one of the earliest near-accurate depictions of Stonehenge, in the form of a watercolour sketch done ‘on the spot’ by Lucas de Heere (b. 1534, d. 1584), a Flemish Protestant exile who resided in England between 1567 and 1576.  He evidently took to his adoptive country, compiling a guidebook to Britain, its history and the dress and manners of its inhabitants, entitled Corte Beschryvinghe van England, Scotland, ende Irland.  De Heere’s description and drawing of Stonehenge is important for its observations on the techniques of construction.  Tenons – raised points on the tops of the stone pillars, visible on one of the trilithons in the foreground – locked into mortises – matching indentations in the lintels – which held them in place and prevented them from slipping off.

Stonehenge has been a source of fascination and speculation for historians, writers and archaeologists as well as casual observers, visitors and tourists.  The questions that they have all asked – how and why? – haven’t changed much over the centuries, like the stones themselves.  The answers have, though, and the recent discoveries are only the latest, exciting chapter in a very long tale of imaginings and interpretations.