Just in case you’ve been living in a cave on the island of Patmos, here’s a reminder about the forthcoming illuminated manuscripts conference at the British Library! It will be taking place on Monday 1st December, 10.45am-5.15pm. It is being held in honour of Lucy Freeman Sandler, who has published extensively on British Library manuscripts. The speakers are each leading lights in the field of art history and manuscript studies: Nigel Morgan, Kathryn Smith, Julian Luxford, Alixe Bovey and Paul Binski. Lucy Freeman Sandler will also be giving a paper on Egerton MS 3277, the Bohun Psalter. This is an unmissable opportunity to hear them talk about their most recent research.

150 people have registered to attend so far. If you haven’t reserved your place yet, don’t delay! E-mail James Freeman ([email protected]) to bag a seat, and check out our earlier blog post for further details of the programme.

As a taster of what we have to look forward to next month, let’s take a closer look at the manuscript that will be the subject of Nigel Morgan’s paper: Add MS 38842, an English apocalypse fragment, which has recently been published on Digitised Manuscripts.

Sadly, only 8 folios are known to survive, but they contain wonderful illuminations on every page, including these of the Woman and the Beast. 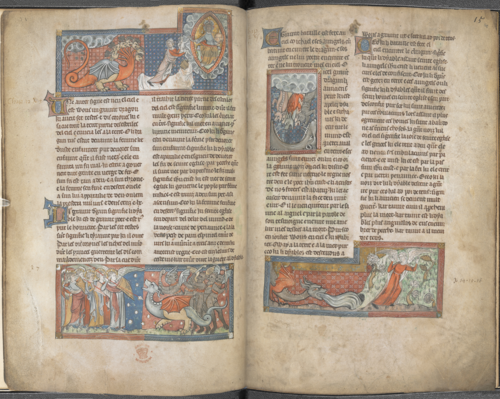 The Woman clothed with the sun with the moon under her feet and the Beast with seven heads, from an Apocalypse fragment with a commentary in French prose, England, early 14th century, Add MS 38842, ff. 3v-4r

A fierce red dragon with seven heads attacks the woman, but she looks back at him defiantly while passing her child up to God in heaven. Below, a host of angels come to her aid with spears, fighting off the beast and his army of club-wielding creatures, which represent vice. They are soon dispatched into a waiting hell-mouth, into which they dive headlong with evil grins. The woman grows wings and escapes from the beast; here she represents the Church, as the French commentary explains, escaping from the evil on earth.

On either side of the final folio of the British Library fragment is the episode of the angels and the seven vials (Revelation 16). First, the angels, clothed in pure white gowns with golden girdles, receive their vials at the temple door. Although the text states that the vials, containing the wrath of God, are given to the angels by one of the four beasts of the Apocalypse, the image shows an angel giving out the last vial. 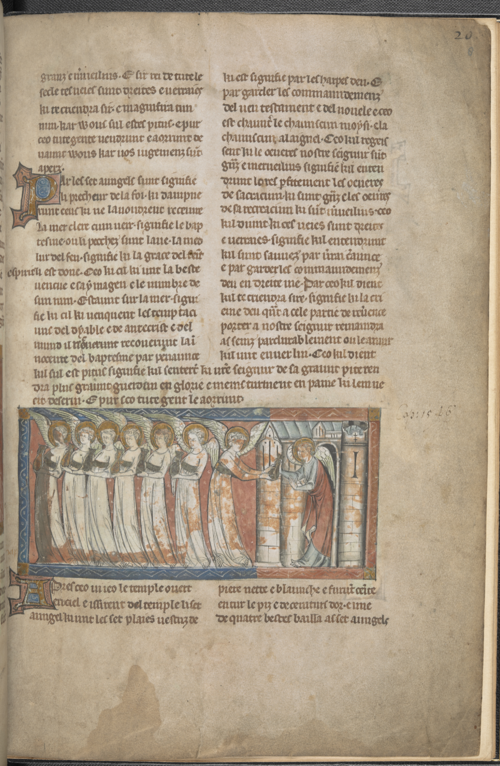 The commentary in Anglo-Norman French tells us that the angels represent ‘li precheur de la foi’ (the preachers of the faith), ‘ki dampnerunt ceux ki ne la voudrent receuvre’ (who will damn those who do not want to receive it).

On the following page is a scene of high drama: six of the angels pour out God’s wrath on the earth, the sea, the rivers, the sun, the beast’s kingdom and the air. Some people lie sleeping or dead on the left, while in the foreground three figures writhe in terror, at the same time attacking each other violently. 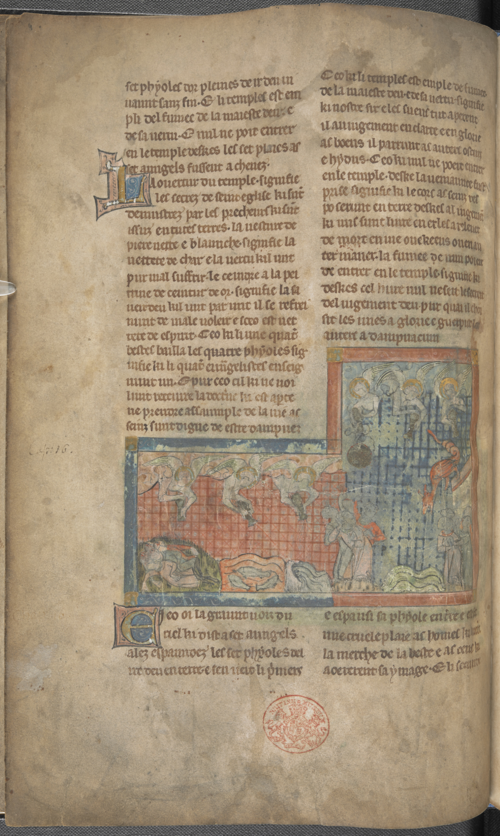 This Apocalypse is believed to have been illuminated by the English court artist who worked on the ‘Treatise on Good Government’, given by Walter of Milemete to Edward III (Oxford, Christ Church MS 92). Milemete also presented a copy of the Secretum Secretorum to Edward III as companion volume to his treatise: Add MS 47680, one of the manuscripts displayed in our exhibition, Royal Manuscripts: The Genius of Illumination. 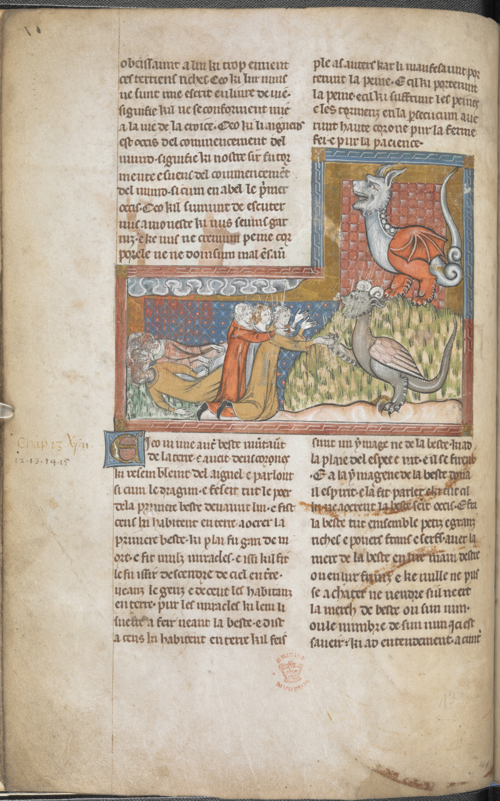 Three men worshipping the beast out of the earth, with the dragon on a hill;  fire descends from heaven and four men lie dead, Add MS 38842, f. 5v