We have now passed the half-way point of this phase of the Greek Manuscripts Digitisation Project, generously funded by the Stavros Niarchos Foundation and many others, including the A. G. Leventis Foundation, Sam Fogg, the Sylvia Ioannou Foundation, the Thriplow Charitable Trust, and the Friends of the British Library. What treasures are in store for you this month? To begin with, there are quite a few interesting 17th- and 18th-century items to look at, including two very fine 18th-century charters, with seals intact, an iconographic sketch-book (Add MS 43868), and a fascinating Greek translation of an account of the siege of Vienna in 1683 (Add MS 38890). We continue to upload some really exciting Greek bindings – of particular note here are Add MS 24372 and Add MS 36823. A number of scrolls have also been uploaded, mostly containing the Liturgy of Basil of Caesarea. A number of Biblical manuscripts are included, too, but this month two manuscripts of classical authors take pride of place: Harley MS 5600, a stunning manuscript of the Iliad from 15th-century Florence, and Burney MS 111, a lavishly decorated copy of Ptolemy’s Geographia. 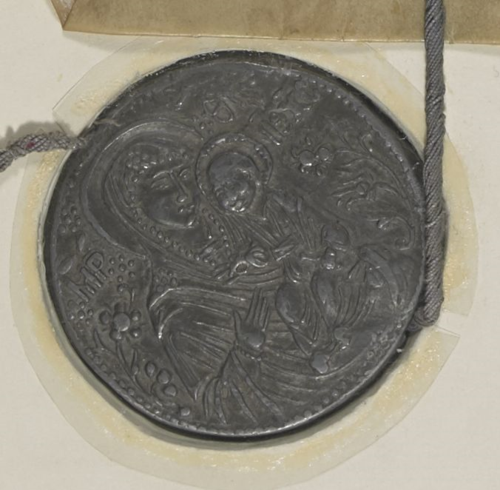 Add Ch 76659, Confirmations by the Patriarch of Constantinople of the stavropegiacal rights of the Monastery of Theotokos Chrysopodariotissa near Kalanos, in the province of Patras in the Peloponnese, December 1786.

Add Ch 76660, Confirmations by the Patriarch of Constantinople of the stavropegiacal rights of the Monastery of Theotokos Chrysopodariotissa near Kalanos, in the province of Patras in the Peloponnese, March 1798. 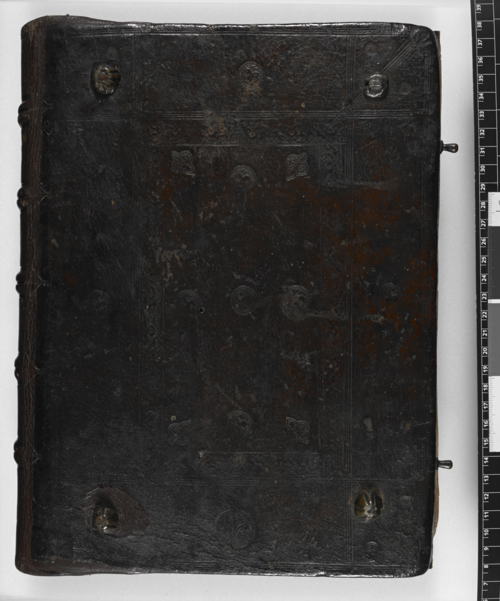 Add MS 24381, Gregory of Nazianzus, Orationes, most being imperfect at the beginning, owing to miniatures which have been torn out. Three miniatures remain on ff 2r, 41v, and 52r. One wooden board from an earlier (15th-century?) binding survives and is kept separately as Add MS 24381/1. Written in 1079 or 1088, probably at Constantinople: the hand has been identified as that of Michael, a monk at the monastery of Christ Panoikteirmon in Constantinople.

Add MS 28823, John Zonaras, Commentary on the Canons of the Apostles, of the ecumenical and local councils and of the Fathers, and related texts. 4th quarter of the 14th century.

Add MS 33318, Menaion for the month of September, imperfect. f 1 should follow f 185. The text varies considerably from that of modern printed editions. 4th quarter of the 14th century.

Add MS 36654, Lives of Saints for the month of October, mostly by Symeon Metaphrastes. The manuscript ends with the text set out in cruciform with the letters of the Victorious Cross set in the angles. An inscription on f 215v records that it was brought to the Euergetis Monastery in Constantinople in 1103, and was probably created around the same time.

Add MS 36669, Apophthegmata Patrum: a compilation of the Greek Church Fathers, bearing the title Λειμὼν ἐνθάδε καρπῶν πεπληρωμένος. 14th century. In a 17th-century binding of boards covered with leather with gilt ornament, the centrepiece representing on the upper cover the Crucifixion, on the lower cover David and the angel of the Lord.

Add MS 36823, Menaion for the months of November and December, imperfect, partly palimpsest. 15th century, Selymbria: donated to the Diocese of Selymbria by the copyist John Chortasmenus. Bound with bare oak wooden boards, with a 19th-century leather spine. Traces of previous leather covering on back board and nail holes from clasps or furniture. 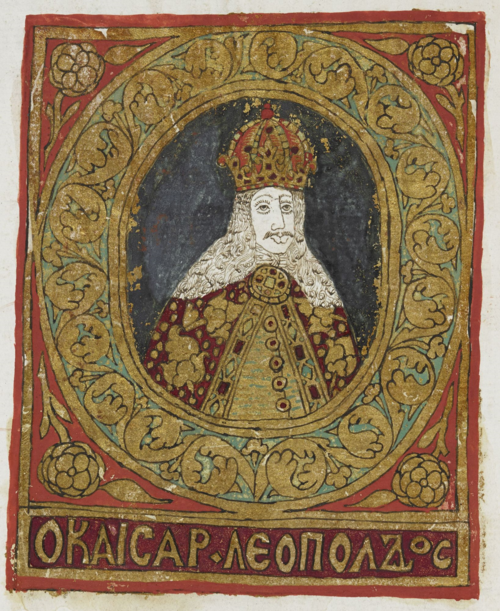 Add MS 38890, Siege of Vienna, Ἀποκλεισμὸς τῆς Βιέννης, an account of the siege by Turks in 1683, translated from Italian into Modern Greek by Jeremias Cacavelas. Written by the priest Nicolas at Bucharest in December 1686, at the request of Constantin Brâncoveanu (b. 1654, d. 1714), later Prince of Wallachia. 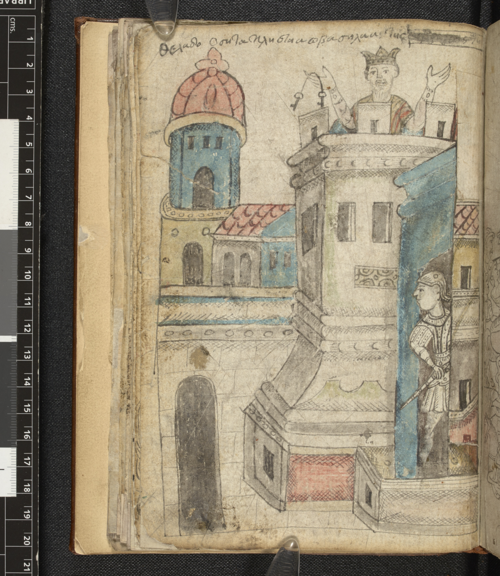 Burney MS 56, Liturgy of St John Chrysostom, 2nd half of the 16th century.

Burney MS 57, Liturgy of St Basil of Caesarea, 2nd half of the 16th century. 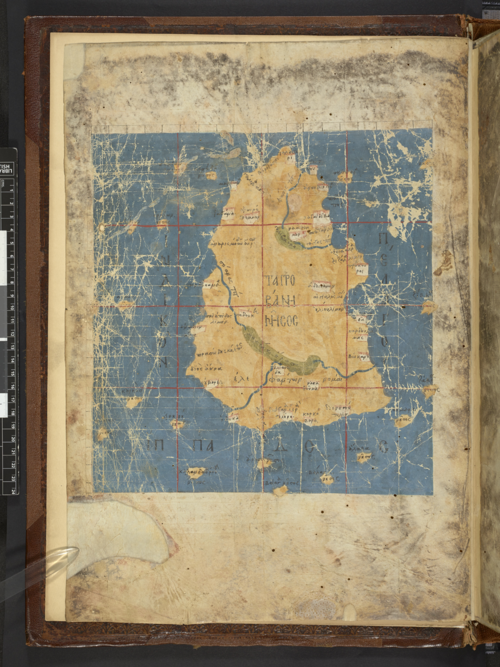 Burney MS 111, Ptolemy, Geographia, with many diagrams and coloured maps, all except that on f 1v being later fifteenth-century replacements on inserted leaves. 4th quarter of the 14th century-1st quarter of the 15th century.

Egerton MS 2744, Menaion for the months June, July and August. Imperfect at the beginning and end, some leaves are missing from the body of the volume. 12th century, written at Epirus. 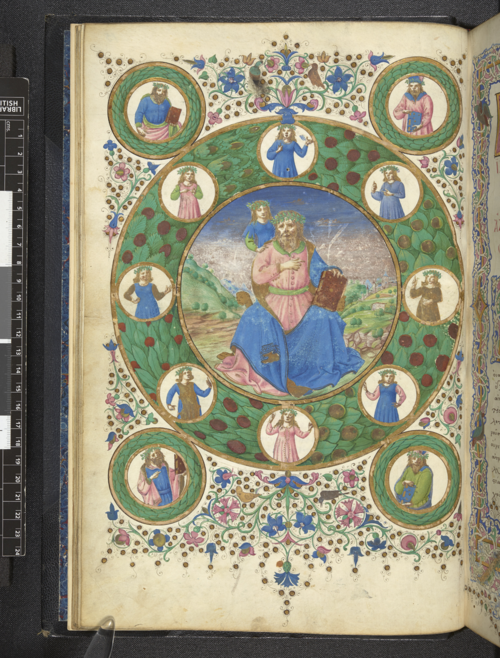 Royal MS 12 A VIII, Complimentary verses to Elizabeth I on her Accession Day, 17 Nov., by Robert Twist, alumnus of Westminster School, in Latin and Greek. 1597.

Royal MS 12 A XLVII, Complimentary addresses in prose and verse to Elizabeth I on her visit to Woodstock and Oxford, 31 August 1566, by members of Oxford University. Oxford, 1566.