Just in time for the holidays, we announce the latest batch of Greek manuscripts to be uploaded to Digitised Manuscripts. This project has been generously funded by the Stavros Niarchos Foundation and many others, including the A. G. Leventis Foundation, Sam Fogg, the Sylvia Ioannou Foundation, the Thriplow Charitable Trust, and the Friends of the British Library.

As always, there is something for everyone in this latest upload. We have already discussed the marvellous Phillipps Lectionary (Add MS 82957) in two blog posts, and as usual, there are many other Biblical manuscripts of interest to peruse. A bumper crop of patristic manuscripts are also included. Particularly noteworthy here is a very fine manuscript of the Orations of Gregory of Nazianzus (Add MS 36634) and a miscellany which may well repay closer attention (Add MS 24375). Some important Byzantine items have also gone online, amongst which pride of place must go to Add MS 36749, which is the sole witness to 122 letters by an unnamed 10th-century Byzantine professor. Those with an interest in the history of scholarship will welcome yet another manuscript formerly owned by Isaac Casaubon, a heavily annotated copy of the Epistles of Phalaris (Royal MS 16 D II). For classicists, the standout items are surely Add MS 58224, an important manuscript of Appian, and last but certainly not least, the famous Burney MS 69, a lavishly-decorated 16th-century manuscript of Greek treatises on warfare.

If you would like to support our Greek Manuscripts Digitisation Project, please click here to learn how you can make a donation and help to make our manuscripts accessible online. 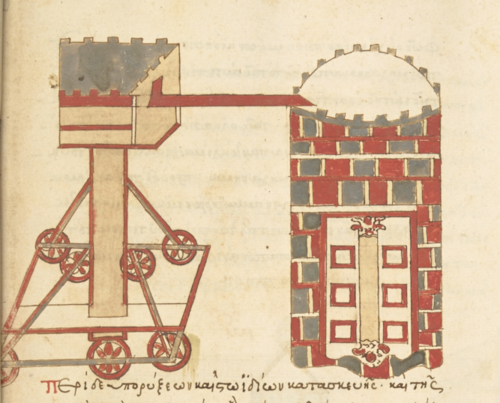 Add MS 24370, Horologion. 16th century. Illuminated head-pieces and initials. Full leather binding. Rebound in the 19th century, but leather of previous boards onlaid (gilt-tooled, with the Crucifixion at the centre, and emblems of the evangelists).

Add MS 27862, John of Damascus, Dialectica sive Capita philosophica (TLG 2934.002) and Expositio fidei (TLG 2934.004); Sketches on the Division of Philosophy according to Christ and On the Seven Good Things; Anastasius of Sinai, Viae dux (TLG 2896.001); selections and fragments from other works (theological and geographical). Byzantine binding (rebacked) of wooden boards covered with blind-tooled leather. Two edge pins, the ends of the straps (now lost) were left over the pastedown and now protrude from the book. The fore-edge is shown on Digitised Manuscripts as f v recto. 11th century. 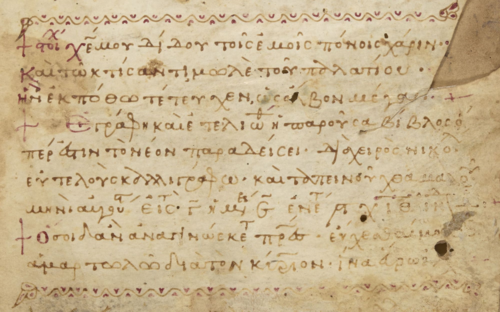 Add MS 30043, Σχηματολόγιον, offices of the tonsure and consecration of a monk. 15th century. 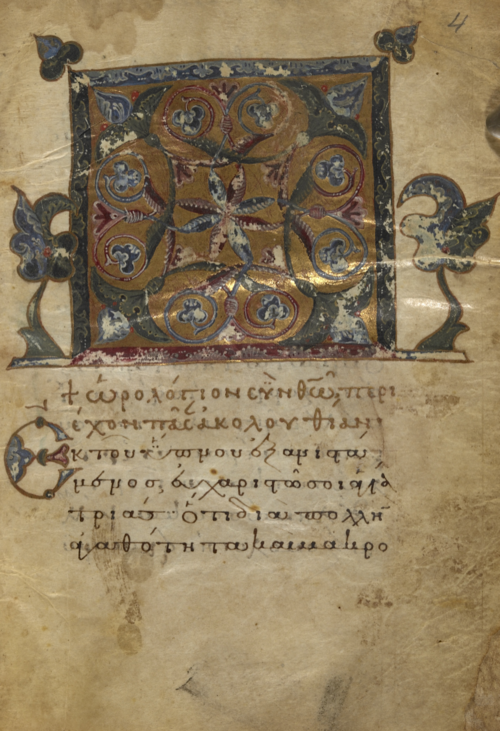 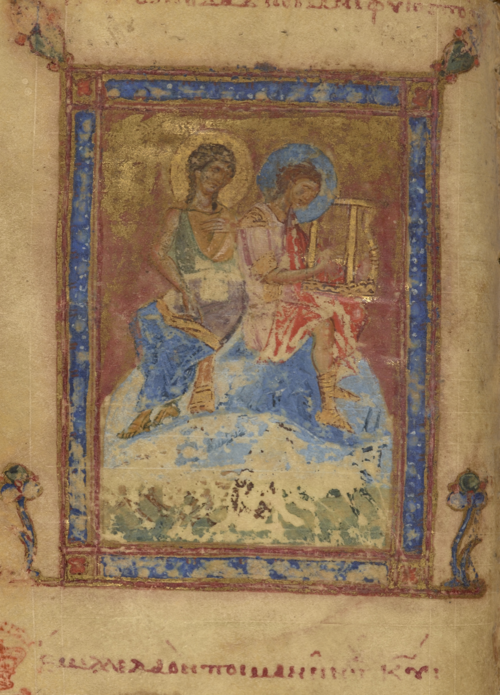 Add MS 37534, Life and Miracles of Saints Cosmas and Damianus (BHG 373b), imperfect, lacking two leaves at the beginning and one or two quires after f 14. All the leaves are mutilated, especially at the top. The narrative differs largely in contents, and wholly in language, from that hitherto known. At the end (f 42r) is a hymn to the archangel Michael in a different hand. Egypt, 11th century: Brought from Egypt in 1907 and said to have been found near Edfu (St Mercurius Monastery). Found with Coptic MSS bearing dates in the late 10th and 11th centuries. Written in a very late uncial hand. 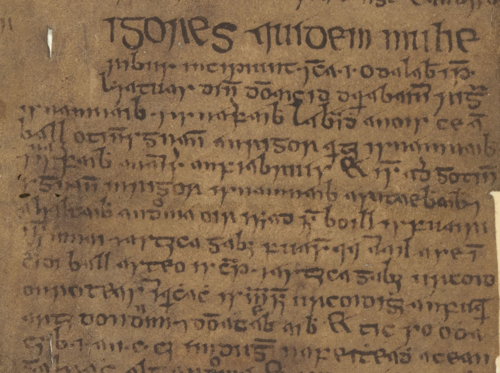 Add MS 39583, Fragments collected by Robert Curzon to illustrate the history of writing, including fragments of a Greek Gospel lectionary (Gregory-Aland l 182, Scrivener evst. 233); A leaf from a manuscript containing Ephraem the Syrian, Sermo Compunctorius (CPG 3908); a miniature of St. Mark in the Byzantine style of the ?13th century, probably from a Greek Gospel-book; Facsimile transcript of the Prague fragment of the Codex Forojuliensis of the Gospels; Leaf from a commentary on the Aphorisms of Hippocrates (TLG 0627.012), in Middle Irish. The volume originally contained both Western and Oriental fragments, but the latter have now been transferred to their appropriate departments (Egyptian Antiquities, British Museum, and Asian and African Studies, British Library)

Add MS 39610, John Climacus, Scala paradisi (TLG 2907.001) and Liber ad Pastorem (CPG 7853), with additional prefatory material. 11th century. Illuminated head-pieces and initials, and a drawing of the Ladder of Ascent on f 206r. Binding of blind-tooled leather over birch boards. Writing on the upper edge, which can be seen on Digitised Manuscripts as f iii recto.

Add MS 41086, Pentecostarion, imperfect at the beginning. 15th century. Initials and headings in red. 17th-century binding. A later gilt-stamped figure of an angel or evangelist, impressed awry within the top left-hand corner of the outer panel, appears to represent a bungled and abandoned design. 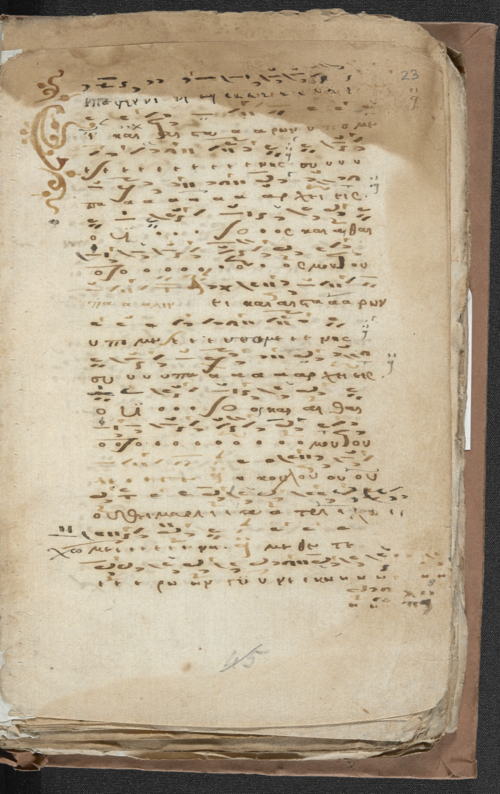 Burney MS 16, Psalter. Coloured penwork headpiece and initial (f 1r). Written by Matthaeus the hieromonk for Pachomius the monk at the Monastery of Saint Catherine, Mount Sinai, and dated 2 July 1661.

Burney MS 18, Four Gospels and Hebrews (Gregory-Aland 480; Scrivener evan. 568; von Soden δ 462), adapted for liturgical use, imperfect, followed by Synaxarion and Menologion. Headpieces decorated in colours and foliate patterns on gold grounds at the beginning of each Gospel (ff 3r, 63r, 101r, 163r). Titles, initials and capitula in gold. In a binding of blue velvet over wooden boards with embroidered Greek spine title, brass corner pieces and two gold plaquettes of the Adoration of the Shepherds and the Adoration of the Magi set into the upper and lower boards, respectively, dating from the last quarter of the 16th century and probably Milanese or North European imitating a Milanese style. Written by Ioasaph of the monastery of the Theotokos ton Hodegon in Constantinople, 4 June 1366 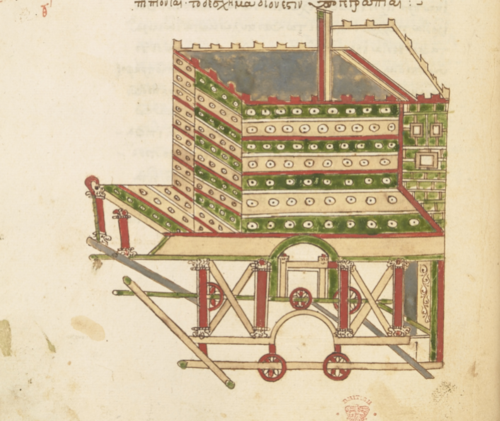 Burney MS 69, Greek treatises on warfare, with numerous drawings. Includes works by Athenaeus, Biton, Heron, Apollodorus, Philo of Byzantium, Leo VI the Wise, and others. Italy, N. E. (Venice), completed 7 May 1545. The scribe of a large portion of the manuscript was identified as that of Escorial MS gr. 138.

Egerton MS 2786, Gospel Lectionary (Gregory-Aland l 346; Scrivener evst. 255). Imperfect and partly palimpsest: ff 55 to 157 are composed of leaves from at least four manuscripts of the 12th century, of which one (ff 59, 60) is a Lectionary, containing lections from Matthew; another (ff 55, 64, 73, 80, 84, 85) is a manuscript of St. Gregory of Nazianzus, written in double columns, and containing portions of the Orations (among others, parts of Orations 37, 38, 45); a third (f 132) is a manuscript of the Septuagint, containing part of Daniel 3; and the rest are from a theological work, most of which is wholly obliterated. 12th-14th century. 5 headpieces in red and brown with a braided or geometric pattern (ff. 40v, 65v, 96v, 132, 136v). Large initials in red and/or brown and red with penwork decoration, some anthropomorphic with a hand blessing. Smaller simpler initials in red. Simple headpieces in brown and red. Highlighting of letters in red.