The Victorian art critic John Ruskin, better known nowadays for his writings and for a notorious spat with the American painter James McNeill Whistler, was also a collector of medieval manuscripts. Almost ninety can be identified as having been owned by Ruskin at some point, several of which are now in the British Library. (A full list can be found at the end of this post.)

Newly digitised is Egerton MS 3046, a Greek Gospel lectionary owned and annotated extensively by Ruskin. The lectionary (Gregory-Aland l 238) dates from the last quarter of the 11th century or the 1st quarter of the 12th century. In its current condition, it contains a number of small headpieces in gold, large initials in colours and gold, and other ornamentation. Sadly, however, a large headpiece on f 2r has been excised. It was well known that Ruskin would take apart manuscripts, presenting cuttings to friends and institutions. We should be wary, however, of seeing Ruskin’s hand behind this excision – it is very common for headpieces to disappear from manuscripts, and many other examples can be found in the Greek collections on Digitised Manuscripts.

Ruskin clearly treasured this manuscript, and worked through it carefully. His annotations reveal that he paid attention both to the form of the manuscript and its contents: noting, variously, specifics about Bible passages, or making comments on the script (which he clearly had some difficulty with).

Ruskin’s annotations reflect a time when he was struggling with his religious beliefs. Many of his comments on individual Biblical passages express Ruskin’s displeasure with specific details or scenes. Yet he would occasionally revise his view, as the above example shows, in which an earlier criticism of John 25.6 is corrected. 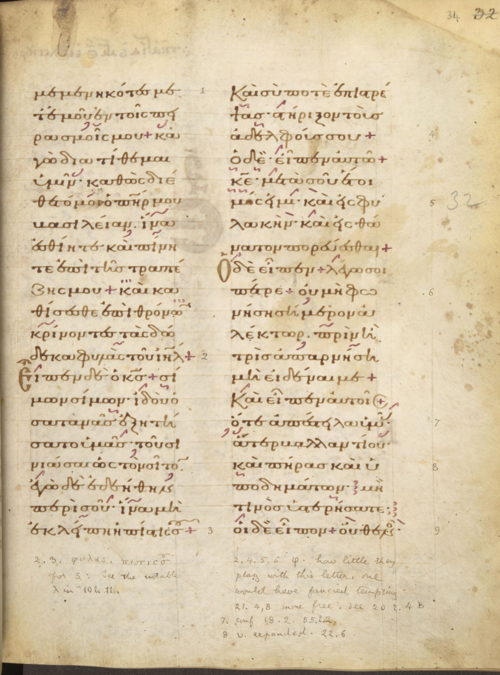 Egerton MS 3046, f 34r. Ruskin's note at the bottom reads "φ. how little they play with this letter, one would have fancied tempting".

Given Ruskin’s reputation as an aesthete, it is fascinating to see his response to the Greek script itself. Here (above), he wishes the scribe would “play” more with the letter phi. Elsewhere, he groans about the form of beta common in manuscripts of this time: 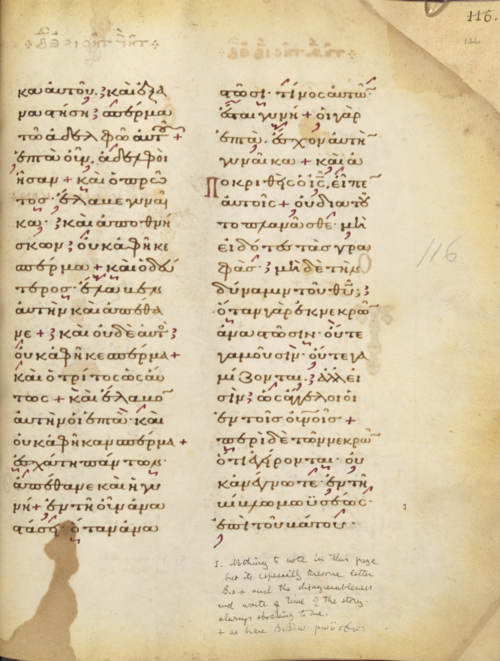 Egerton MS 3046, f 126r. Ruskin's note at the bottom reads "Nothing to note in this page but its especially tiresome letter B.s. and the disagreeableness and waste of time of the story [Mk 12:18-27] always shocking to me".

The manuscript will of course have special appeal to Ruskin scholars. But the annotations are clearly of wider interest: they reveal the deeply personal responses of an educated Victorian to the Bible, and they give a great insight into the continuing relevance of medieval manuscripts in the modern era.

Appendix: manuscripts formerly belonging to Ruskin and now in the British Library.