The third phase of the Greek Manuscripts Digitisation Project has now drawn to a close. In this update, we give details of the last manuscripts to be digitised in this phase. In the coming weeks, a number of additional posts will provide guides to specific themes and topics within the collection, and further outreach projects relating to the Greek manuscripts will be developed over the next year. We are most grateful to the generous benefactors who have supported the project, especially the Stavros Niarchos Foundation, and also many others, including the A. G. Leventis Foundation, Sam Fogg, the Sylvia Ioannou Foundation, the Thriplow Charitable Trust, and the Friends of the British Library.

We would also like to thank the many colleagues in the Library who contributed to this phase, especially Ann Tomalak, from Conservation; Neil McCowlen, Kristin Phelps, and Alex White, from Imaging Services; and Sarah J. Biggs and James Freeman, from Ancient, Medieval, and Early Modern Manuscripts. Their hard work (outlined in blogs here, here, and here) was essential to the timely completion of the project. 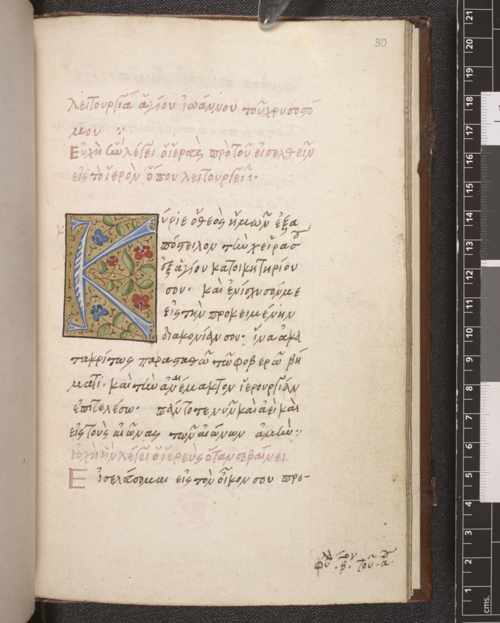 Add MS 34060, Collections of canons, with theological, liturgical, and historical pieces, and a few letters bearing on the relations between the Eastern and Western Churches. 12th and 15th centuries.

Add MS 39613, John Chrysostom, Divine Liturgy, in a Latin translation, ff 2r-29v, followed by the Greek original, ff 30r-59r. The Latin text differs from that in printed editions. France, probably Paris, between 1502 and 1506. Illuminated initials (ff 2r, 30r) and border (f 2r) of late French style. 16th century binding of light brown leather, blind-tooled, the panel formed by fillets alternating with four rows of impressions of a stamp of interlaced arcs of lattice work, five dots within the interlacement. The border is formed of lozenges enclosing roses. Brass clasps (one broken). Gilt and gauffred edges. The boards are from 16th century printed books: a Latin grammar with examples in French, a Latin servicebook, and another book in French. 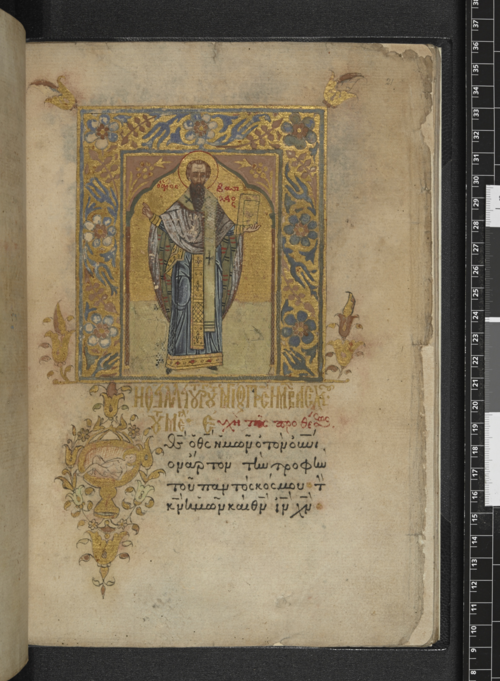 Add MS 40755, The Divine Liturgies. Illuminated headpieces on ff 2r, 21r, and 46r, containing figures of Saints John Chrysostom, Basil the Great, and Gregory, standing under arches surrounded by a decorative border. An unfinished miniature of St Basil occurs on f 61r. Historiated initials on ff 9v, 14v, 19r, 27v, 28r, 31r, 44r, and numerous initials in gold and colours throughout. Written by the scribe Michael at the request of the patriarch Macarius  in 1600, at the monastery of the Virgin at Demitrash, near Brusa. The former (17th-century) binding of crimson velvet over millboard with striped linen beneath, is kept separately.

Add MS 82951, Justin Martyr, Opera. Created in Venice in 1541, probably at the request of Guillaume Pelicier. 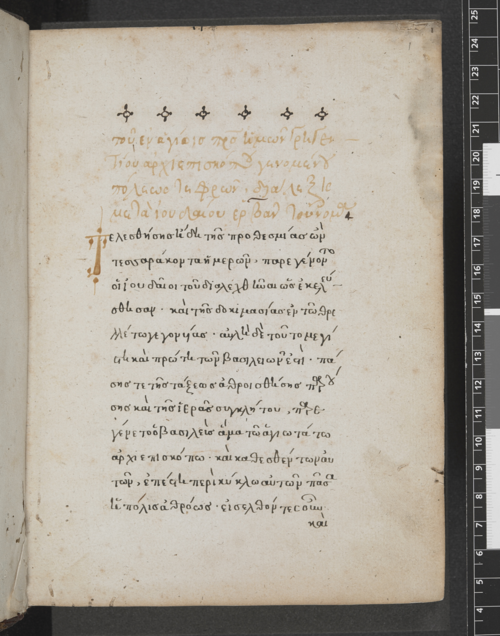 Add MS 82953, Pseudo-Gregentius, Dialexis, and a collection of extracts from the Old Testament. 16th century.

Arundel MS 550, Notebook of Johannes Cuno, containing a number of extracts from Greek and Latin authors, notes on grammar and metre, and other items. Italy, N. (Padua), c. 1506-1508. 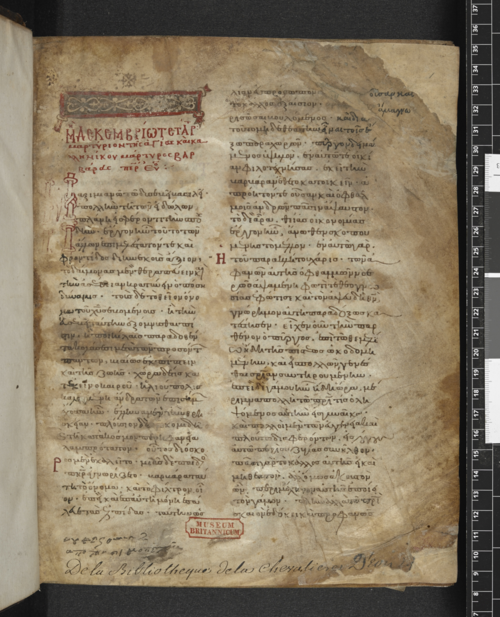 Burney MS 44/1, f 1r. Foliage headpiece at the beginning of the life of St Barbara. Eastern Mediterranean, 2nd half of the 11th century-1st half of the 12th century.

Burney MS 44, Lives of martyrs celebrated from 4 to 31 Dec, in two volumes, Burney MS 44/1 and Burney MS 44/2. All except that for St John of Damascus are in the versions attributed to Symeon Metaphrastes. Completed in July 1184. Foliage headpiece, in red and brown (volume I, f 1r). Other simple headpieces. Large red initials, some decorated with foliate shapes. Small red or gold initials.

Burney MS 51, Two fragments of the works of St Gregory of Nazianzus, the first dating from the late 10th or 11th century, the second dating from the 14th century. Fragment I possibly from Constantinople. 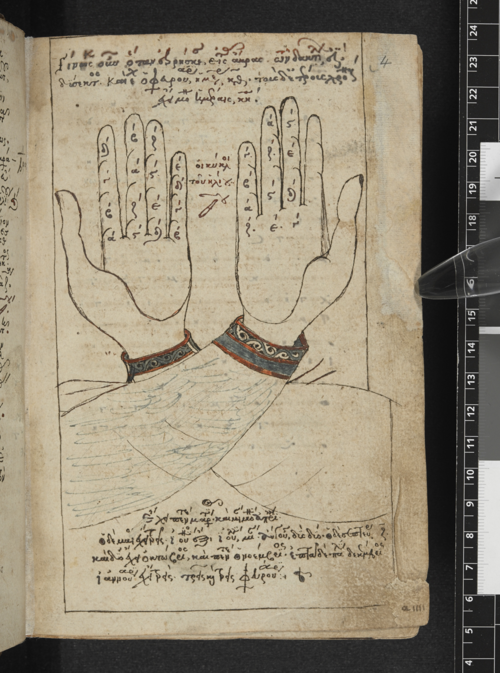 Burney MS 54, f 4r. Diagram of the palms of hands relating to the cycles of the sun. Eastern Mediterranean (Ephesus?) 1573.

Burney MS 94, Grammatical and medical treatises, including works by Manuel Moschopoulos, Thomas Magister, Rufus of Ephesus, and Oribasius of Pergamon. Italy, N. E. (Venice), 2nd half of the 15th century.

Burney MS 104. Commentary on and introduction to Ptolemy's Tetrabiblos. Written in 1543, possibly in Paris.

Burney MS 105, Pappas of Alexandria, Synagoge, imperfect, including extracts from the Mechanica of Heron of Alexandria. Italy, 2nd half of the 16th century.

Burney MS 402, Collection of Greek and Latin inscriptions copied by Anthony Askew, M.D., in the Levant and Greece, with notes on their situation, size, state of preservation, etc. Completed on 24 January 1748.

Burney MS 408, Palimpsest, the upper (14th-century) text being homilies of St John Chrysostom on Matthew and John, and the lower fragments of a 10th century Gospel lectionary (Gregory-Aland l 338).

Egerton MS 266, Michael Attaliates, Πόνημα νομικὸν ἤτοι σύνοψις πραγματική (TLG 3079.002). The text from f 45r onwards differs from that in the TLG. The copyist writes on f 56r that the prototype was imperfect: 'τοῦτο περισσὸν ἦν, ἔλιπε δὲ τὸ τέλος'. Marginal comments (mainly in Greek, and a few in Latin) have been added throughout the text by at least two later hands. 15th century.

Egerton MS 622, Poems by Gregory of Nazianzus with interlinear glosses in the form of a mathematarion, and a dictionary copied and compiled by Basileios Μοσκοβόρρωτος. 16th century, incorporating parts of book printed in 1727. 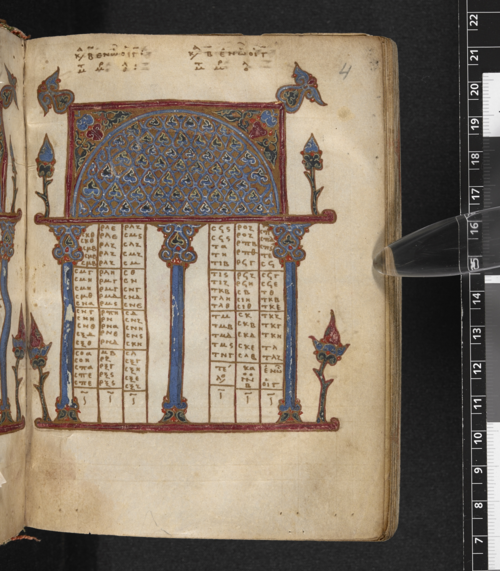 Egerton MS 2783, Four Gospels, imperfect (Gregory-Aland 714). 12th-13th century. 7 full-page miniatures in colours on gold grounds of the symbols of the Evangelists and Evangelist portraits (lacking a portrait of Luke) (ff 13r, 13v, 106r, 106v, 166v, 264r, 264v). Canon tables in red in frames, with foliate decoration (ff 5r-9v). Large headpieces in red with foliate patterns. Large initials in red with penwork decoration. Small initials in red. Simple headpieces in red. Text and rubrics in red. 18th century binding of brown stamped leather, with blind tooling and gold edges. On the inside of each cover there is a portion of a 13th-century manuscript of the Sententiæ of Peter Lombard.

Egerton MS 3157, Nicephorus Callistus Xanthopulus, Synaxaria; Ephraem the Syrian, Sermo in pulcherrimum Ioseph, imperfect. 4th quarter of the 14th century. 33 drawings in ink and watercolours. Headpieces in brown and red, some with braided decoration. Headpiece and large decorated initial in watercolours (f 96r). Simple endpieces in red or brown. Initials in red, some with penwork decoration. Rubrics in red. The former contemporary binding of wooden boards and tooled leather, with metal bosses on each side kept separately as Egerton MS 3157/1.

Harley MS 7509, Collection of copies of Greek inscriptions made in Asia Minor by William Sherard (1659-1728), Consul for the Turkey Company at Smyrna. 1st quarter of the 18th century.

Lansdowne MS 355, Miscellaneous letters of Greek patriarchs, metropolitans, etc., together with letters to John Covel, D.D. and his copies and drafts. 1652-1701. 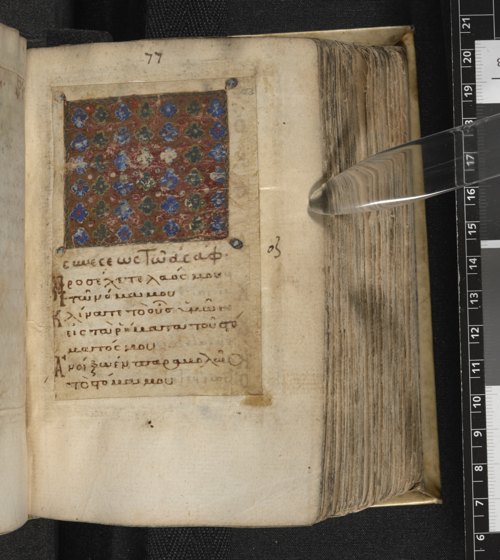 Royal MS 16 D I, Works by or attributed to St Gregory of Nyssa. 13th century.

Royal MS 16 D IV, Indices to the scholia of Tzetzes on Lycophron. Italy, 4th quarter of the 16th century. 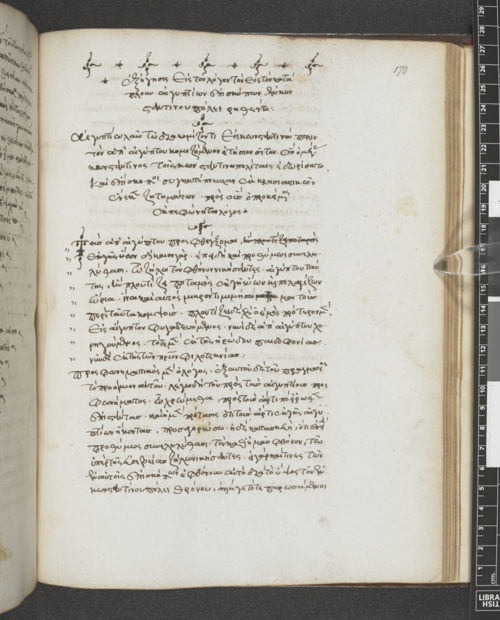 Royal MS 16 D VIII, Acts of the First Council of Nicaea, compiled by Gelasius of Cyzicus, followed by two works by Athanasius. Italy, 4th quarter of the 16th century.

Royal MS 16 D XVIII, Eustathius Macrembolites, Hysmene et Hysmenias; Achilles Tatius, Leucippe et Clitophon; and [Eustathius Antiochenus], Commentarius in hexaemeron. The works are from three separate manuscripts, bound together at some point after 1697. 1st half of the 16th century.