As curators of the British Library's major Magna Carta exhibition, we're often asked how we've managed to bring to life the story of what one British government official, writing in March 1941, described as 'a bit of parchment, of no intrinsic value whatever, rather the worse for wear'. The simple answer is that we've presented numerous stories of how Magna Carta has been used (and abused) across the centuries, to show how the text has evolved and what it means to us today. Among the men and women featured in our exhibition are: Thomas More and Thomas Cromwell, Edward Coke and King Charles I, William Penn, Thomas Jefferson and John Adams, William Blackstone and John Wilkes, Rudyard Kipling, Mohandas Gandhi and Nelson Mandela, and Helena Normanton and Eleanor Roosevelt. Here, to mark the 252nd anniversary of the publication of the infamous issue number 45 of The North Briton, our researcher Alex Lock tells the story of John Wilkes and Magna Carta. 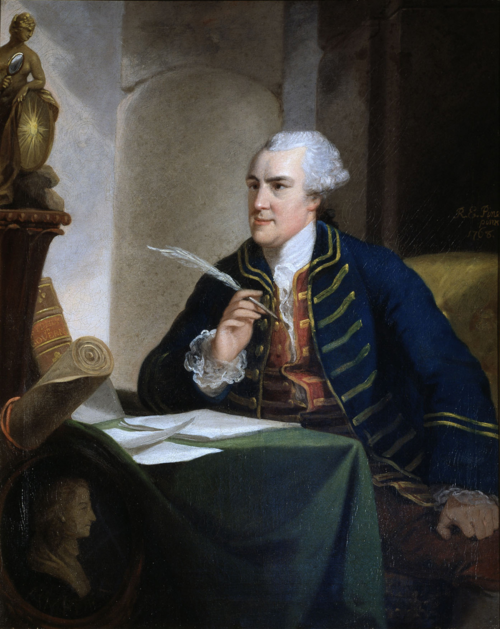 A portrait of John Wilkes by Robert Edge Pine (d. 1788), kindly loaned to our Magna Carta exhibition by the Palace of Westminster, London

Since the lapse of pre-publication censorship in England in 1697 newspapers could be published relatively freely throughout Great Britain – a liberty vaunted by many Britons, especially when they compared themselves with the ancien regimes of Europe. For successive British governments, frredom of the press created major problems. Uncensored and scurrilous, newspapers could be used to cultivate public opinion and to question the government’s activities. In order to suppress some of the more radical publications, the Secretary of State could therefore issue General Warrants, authorising the arrest without charge of anyone suspected of involvement in the publication of a ‘seditious libel’ (that is, anything that was deemed to insult a ‘public person’, the government or monarchy regardless of the truth of the claims). Given this broad definition of what constituted a seditious libel, and the fact that the names of the suspects did not need to be recorded, General Warrants presented a continual threat to authors, editors and publishers in the 18th century. 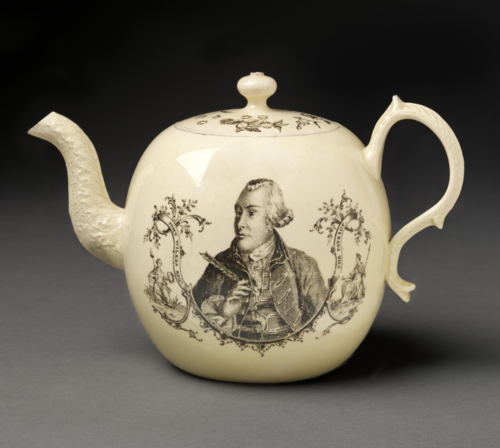 This Wedgwood teapot (c. 1774) shows John Wilkes associated with emblems of English liberty, among which is Magna Carta, kindly loaned to the British Library by the Victoria & Albert Museum

The constitutionality of General Warrants had long been debated, but the scandal that surrounded them following the arrest of the newspaper editor and politician John Wilkes (d. 1797) marked a step change in the growth of popular opposition to them. In 1763 Wilkes was arrested under a General Warrant for publishing a seditious libel against King George III in the infamous no. 45 issue of his newspaper The North Briton. As an MP, Wilkes was quickly released on the grounds of parliamentary privilege, and he soon launched a campaign against the legality of his arrest and the constitutionality of General Warrants. Wilkes and his supporters invoked Magna Carta extensively as a symbol of the ancient rights and liberties that were under threat from the government. Indeed, Wilkes was a master propagandist and his use of Magna Carta in his defence, in print, portraits and caricatures, became closely associated with the ideals of ‘English liberty’. In the 1760s mobs calling out ‘Wilkes and Liberty’ became a common phenomenon on the streets of London. 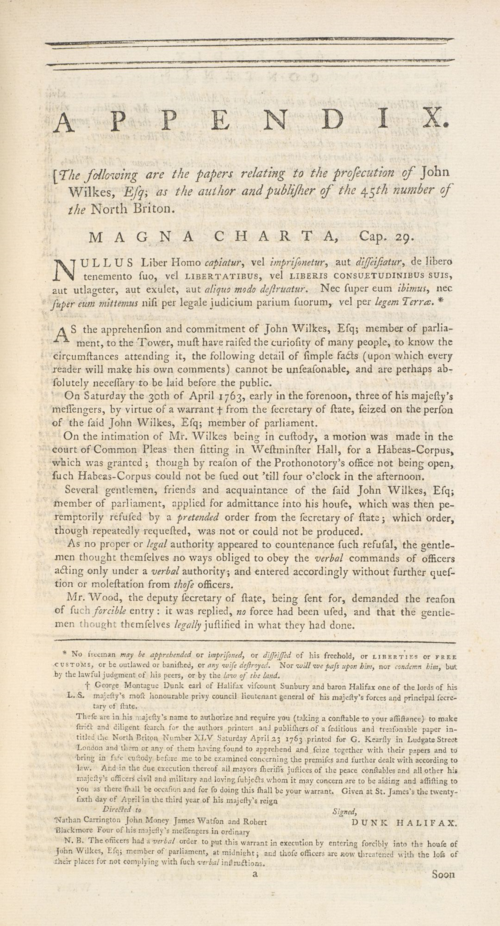 The Appendix to issue no. 45 of The North Briton, in which John Wilkes set out the circumstances of his defence, beginning by citing Magna Carta

Eventually, however, the law caught up with Wilkes. The House of Commons soon resolved that parliamentary privilege did not cover seditious libel. Having been expelled from Parliament, the prosecution of Wilkes was begun. The day after the Commons debate, Wilkes was seriously injured in a duel (against a fellow MP who had impugned Wilkes’ character in the preceding debate!); unable to appear before court to answer any charges, he was outlawed and forced into exile in Paris. Although resident in Paris, the propaganda celebrating Wilkes and liberty did not diminish, and there continued to be a steady stream of effective propaganda which connected Wilkes with the symbols of ‘English liberty’, most frequently Magna Carta, such as had raised his profile in the first place. 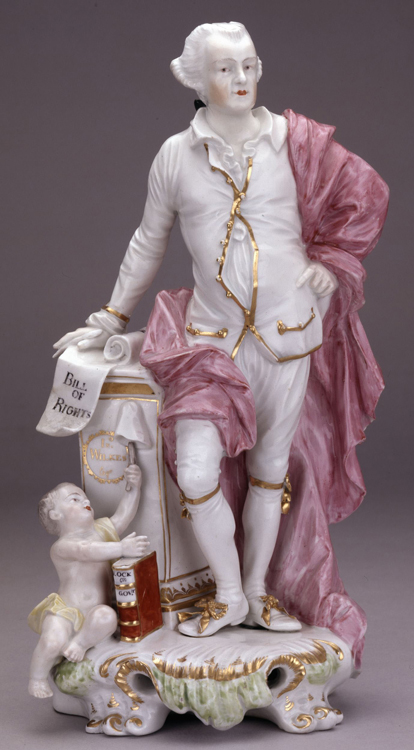 This porcelain figure vies with the Wilkes teapot to be one of our favourite items in the exhibition (kindly loaned by the Trustees of the British Museum): 'Magna Carta' is inscribed on the scroll just above the Bill of Rights

After 4 years in exile on the Continent, Wilkes returned to England in 1768, having run out of money, and handed himself over to the authorities. As popular with the public as ever, and although he had voluntarily delivered himself into custody, Wilkes was freed by a mob and was ultimately forced to re-enter prison in disguise. Indeed, so popular was he that he managed on several occasions to secure re-election to Parliament from his prison cell, even though the result was declared void each time by the government!

John Wilkes's successful use of Magna Carta in the 18th century was a landmark in changing interpretations of that document. What had originated in the 13th century as a peace treaty between the king and the barons was now being used to challenge the very authority of Parliament and the government, on the path to securing greater liberties for the population at large.

Magna Carta: Law, Liberty, Legacy, the largest and most significant exhibition ever devoted to the Great Charter, is on at the British Library until 1 September 2015. Most of the items on display can also be seen on our dedicated Magna Carta website. Please follow us on Twitter (@BLMedieval, using the hashtag #MagnaCarta).