Magna Carta: The Reviews Are In!

We've been delighted by the reviews that we have received for our Magna Carta exhibition, on show at the British Library until 1 September 2015. We're printing a selection of the best comments below ... don't forget that the exhibition is open for the whole Easter weekend and is free for under 18s (with a free children's audioguide, sponsored by the Magna Carta 800th Committee). You can also see the vast majority of the exhibits on our dedicated Magna Carta website, together with specially commissioned essays, and animations narrated by Terry Jones of Monty Python fame.

The Guardian ('Magna Carta Exhibition is an 800-Year-Lesson in People Power') made us exhibition of the week, at the same time that the Alexander McQueen retrospective opened at the V&A, and picked out the medieval manuscript illustrating the nightmares of Henry I ('a surreal masterpiece of medieval art') as one of the show's highlights: 'Somehow these manuscripts, charters, seals, declarations and statutes are as moving as any art. The Magna Carta, it turns out, still packs a mighty emotional punch.' The Nightmares of Henry I (courtesy of Corpus Christi College, Oxford)

Meanwhile, The Daily Telegraph awarded us 5 stars, describing the exhibition as 'rich and authoritative ... This exhibition on Magna Carta deciphers the 800-year-old document with exceptional clarity.'

The Independent ('A Rallying Cry for Freedom That's Still Making History') gave us 4 stars, and wrote, 'To catch fire these dry medieval texts need contexts, which the show smartly supplies'.

Community Channel ('More Than Just a Museum Piece') says that 'what really renders the exhibition such a must-see event is the sense of narrative that is woven by these uniquely fascinating artefacts when viewed together ... what makes this exhibition great is that it's an exemplar of what makes London and its fantastic cultural institutions the envy of the world.' 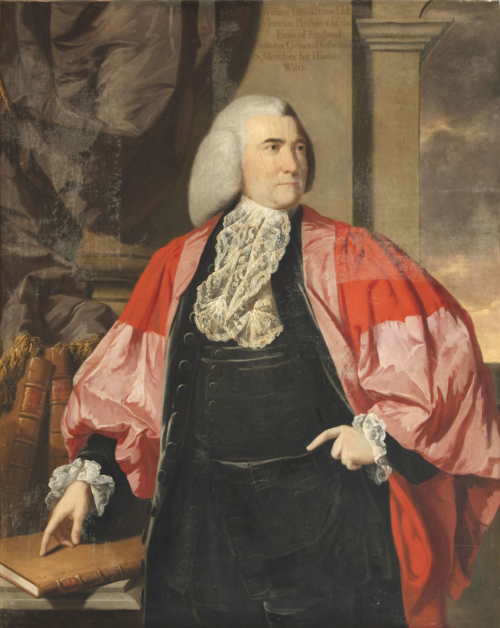 Sir William Blackstone, resting his hand on his The Great Charter and The Charter of the Forest (courtesy of The Bodleian Library, Oxford)

Professor Nigel Saul, writing in The Times Higher Education Supplement ('How an Artefact Became an Idea': a subscription is required to view the original content), anticipated the problem of presenting dry, unattractive documents to a general audience: 'The curators have tried to do this by emphasizing the range of Magna Carta's appeal and the variety of its meaning to audiences ... The continuing relevance of the themes addressed in the exhibition could hardly be made any clearer. The curators are to be congratulated on organizing an exhibition which both captures the power of the Charter over the centuries and draws attention to its capacity to inspire myth.'

The Culture Trip ('Doing Magna Carta Justice at The British Liberty') began its review by stating, 'If you start going now, you can fit in multiple visits before its closure, assuredly learning more and only increasing your enjoyment every time. This exhibit is vast, it is thorough, and is glorious.' 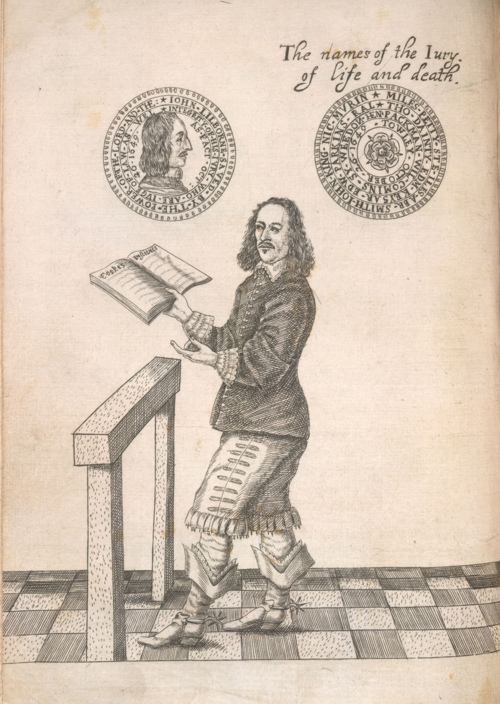 John Lilburne, who was acquitted of committing high treason in 1649 (from a book held by the British Library)

Kate Wiles in History Today wrote, 'Four years in the making, this exhibition is a huge success, encompassing 1,000 years of political and cultural history with a surprising and impressive array of items. It would be easy, having seen it, to spend days revisiting each piece to view it in a new light and revisiting assumptions about Magna Carta, one of the most famous documents in English history, which might not be what we thought it was.'

John Sabapathy of University College London, writing for Reviews in History, chose as the funniest moment in the exhibition a recent cartoon by Stephen Collins, and concluded that, 'The curators, contributors and lenders to this excellent exhibition and catalogue have provided a very great deal of nutritious food for thought.'

A cartoon by Stephen Collins, first published in The Guardian, 28 June 2014

The Economist ('A Manuscript for All Seasons') says that the exhibition 'rewards full-on wallowing. There are swords, axes, paintings, episcopal vestments, hunting horns, re-enactment costumes—even two of John’s molars and a fraction of his thumb bone that were removed from his tomb in 1797—but it is the manuscripts that hold rightful sway. Along with the English language, Magna Carta has a claim to be Britain’s greatest export. Historically minded visitors should make sure not to miss a superb opportunity to understand why.'

A word of warning: The Code of the Gentleman cautions that, 'Much as you would probably expect from the British Library, and as I have experienced in the past with their exhibitions, the vast majority of the artefacts consist of some kind of text, and so a large amount of reading is required to really appreciate or connect with any of the items on display.' But this is offset by 'short interview segments playing on television screens that provide a wonderfully concise summing-up of the themes and ideas explored in each section of the exhibition' and 'some beautiful ‘scene-setting’ artefacts on loan from other museums'.

Finally, according to the Socialist Worker ('The Magna Carta and the Struggle for Our Legal Rights'), 'you can probably give the first room with different versions of the charter a miss ... but from then on it's fascinating'. (Our researcher, Alex Lock, who worked on the post-medieval sections of the exhibition, is especially pleased with this.) 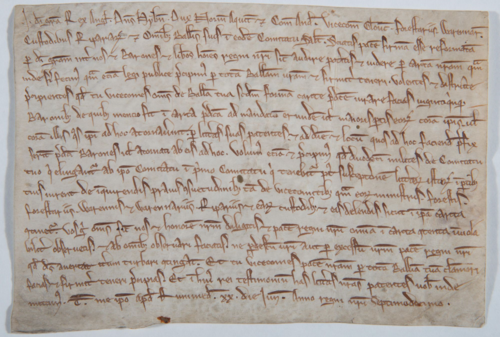 A writ for the publication of Magna Carta, 20 June 1215 (courtesy of Hereford Cathedral)

If you'd like to see Magna Carta: Law, Liberty, Legacy, visit the exhibition homepage. A catalogue, edited by curators Claire Breay and Julian Harrison, is also available from the British Library shop.