We have recently published to Digitised Manuscripts a Dutch scientific manuscript of the early 16th century containing a cornucopia of scientific texts (Sloane MS 345), from prescriptions for ointments and suppositories, to a treatise on varnishes for the conservation of paintings, to a recipe for brandy or aqua vitae. Some of the texts are in Latin and others in Middle Dutch.

The format is of a plain, workaday text, a collection that was probably compiled for a physician and was in fact in the collection of Francis Bernard (d. 1698), apothecary and physician to King James II of England in the seventeenth century. 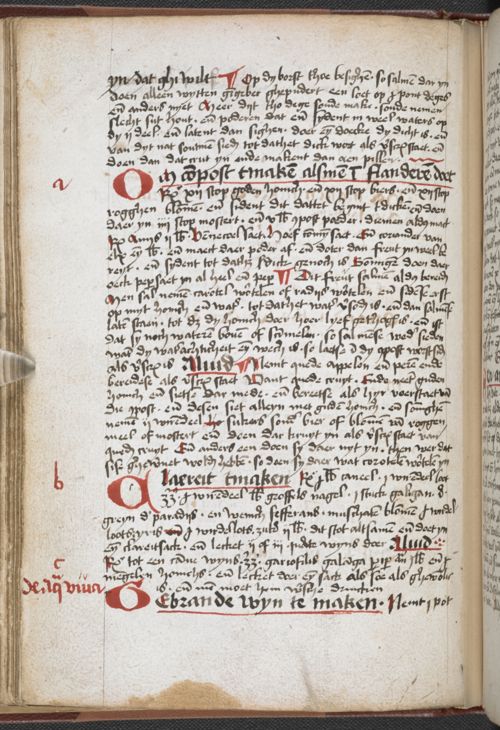 Page of recipes with the rubrics ‘Gebrande wyn te maken’ and ‘de aq[ua] viva’ in the margin, from a Dutch scientific compendium, the Netherlands, c. 1500, Sloane MS 345, f. 50v

One of the key texts is the ‘Regimen sanitatis Salernitanum’, a collection of didactic verse on health, diet and medicine, put together for oral transmission by doctors at the School of Salerno, Italy, and assembled in written form in the 13th century by Arnoldus de Villa Nova (b. c. 1240, d. 1311), professor of medicine. He is credited with coining the label ‘aqua vitae’, which he described as ‘a water of immortality….that clears away ill-humours, revives the heart and maintains youth’. It is interesting to note that in this manuscript, ‘aqua vitae’ or ‘gebrande wyn’ in Middle Dutch, is found in a collection of culinary recipes rather than among the medicinal waters, suggesting that it was starting to be seen as more of a lifestyle choice than a medicine in the early 16th century.

A further contribution by Arnoldus de Villa Nova is a letter to Richard, Bishop of Canterbury, on the medicinal properties of the oak tree. Oak bark was used to treat infections, burns and cuts.

There are several collections of recipes for medicinal waters and herbal remedies. Here is an image from another manuscripts showing the apparatus used for alchemical processes and to prepare alcohol for medicinal uses and for the infusion of herbs, from Sloane MS 3548, a 15th-century English manuscript. 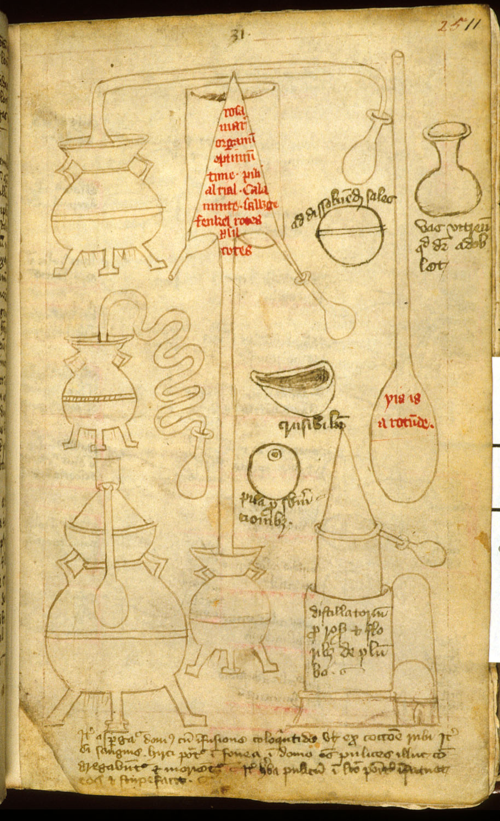 A work on the treatment of wounds is attributed in Sloane MS 345 to the young Lanfranc of Milan and a treatise, ‘De signis mortis’, gives examples of skin conditions and pustules indicating impending death. This treatise includes the Hippocratic facies, the description of a countenance often present at the verge of death, still used in medical prognosis today.

This image is from Sloane MS 6, another manuscript of John Arderne’s medical works. It shows Hippocrates (or Galen) holding up what is perhaps a urine glass to the sun on the lower left page. 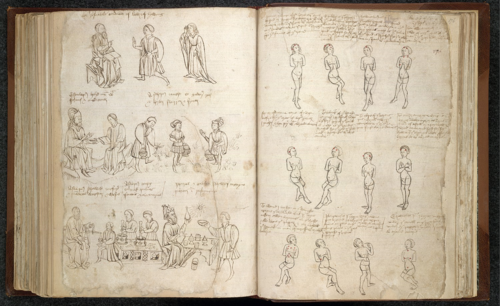 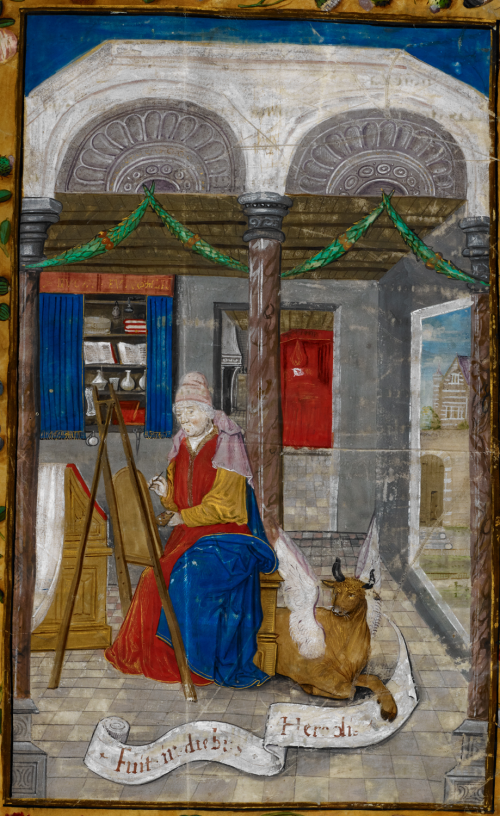 Sloane 345 is a treasure trove of information on medical practices and remedies, but so as not to disappoint our readers who would like to see more graphic representations of medieval medical practices, here are two examples from other medical manuscripts in our collections.

Harley MS 1585 is another Dutch manuscript, this time from the southern Netherlands in the 12th century, a medical miscellany with a pharmacopeial compilation, including a herbal and bestiary. The full online version is available on Digitised Manuscripts. 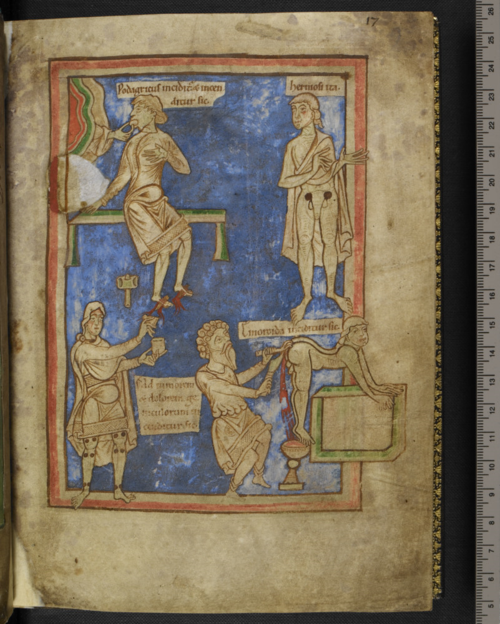 Sloane MS 1977 is a collection of medical texts including Roger of Parma’s Chirurgia , translated into French, with full-page illustrations. It was in the Royal library in the 16th century, but later became part of the scientific collection of Sir Hans Sloane. It is partially digitised in our Catalogue of Illuminated Manuscripts.

Wonderful to see Sloane MS 345, an intriguing Dutch and Latin manuscript, made fully available online now. Readers may be interested to know that a lot of excellent scholarship has occurred in the history of medieval medicine in recent years. Just a couple of points for now: (1) There is a superb website available on Arnau de Vilanova, one of the most important physicians of his day: http://grupsderecerca.uab.cat/arnau/en. This site reflects the work of an international team of scholars who have been editing Arnau's work for the past several decades. They have also been sifting through all the specious attributions that have accreted around Arnau's name. He is most definitely not the author of the *Regimen sanitatis Salernitanum*, and probably not of that text on the medicinal properties of oak, either. Indeed, much of his alleged association with alchemy is also specious: http://grupsderecerca.uab.cat/arnau/en/corpus-alquimic. (2) For readers interested in women's medicine, they might like to know that the title given as "Liber de matrice mulieris et impugnatione" should actually be "Liber de matrice mulieris et IMPREGNATIONE," as is clearly visible in the manuscript. The title translates as "Book of the female uterus and pregnancy." Lots more to say about the other manuscripts shown, too, as we know so much more about the history of surgery and many other topics. There are hundreds of specialists in the world today working on medicine in medieval manuscripts. Maybe your readers might like a guest blog or two to introduce them to the real splendors your collection holds in the History of Medicine.