Additional MS 36684 is a Book of Hours, about the size of a small paperback, made in Northern France in the area of Saint-Omer, near where our large set of Arthurian volumes (recently immortalised in cake) were made and decorated, also in the 2nd decade of the 14th century. Though this is a completely different type of book, it was probably aimed at a similar audience. Delightfully idiosyncratic and amusing images once again decorate the text, in seeming contrast to its serious purpose as a devotional aid. The medieval imagination is allowed to run riot, with every aspect of human and animal physiognomy, and everything in between, on display.

The twelve opening pages contain the calendar with activities for the months of the year. Here is the page for January. Rather than attempting it ourselves, we would like to ask you our readers to write a caption for the image in the lower margin. This will be the first in a series of ‘Invent a caption’ competitions on our blog, so over to you, dear readers! 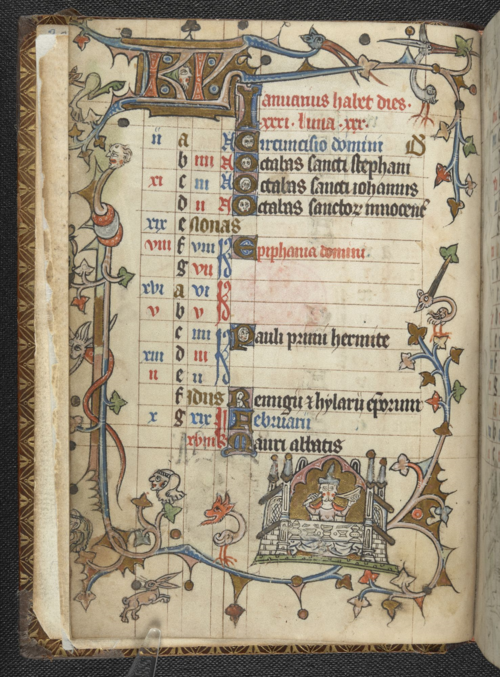 Go on, provide us with a caption to f. 1v, the wittier the better. You can enter via Twitter @BLMedieval or in the comments section below this post.

Some of the pages of this manuscript are almost unbeatable for sheer weirdness: Page from the Hours of the Virgin with border and margins containing hybrid creatures,  Add MS 36684, f.17r

Others are jewel-like, a perfect ensemble of colour and design to delight the eyes of the reader (is that the legs of a pair of bell-bottomed trousers emerging from a cauldron?): 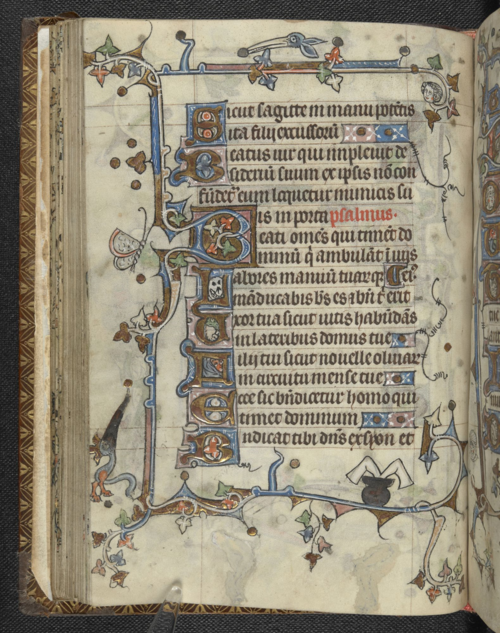 Page from the Hours of the Virgin with border and margins including butterfly, Add MS 36684, f.50v

Birds and fish are favourite subjects, but not always as we know them: 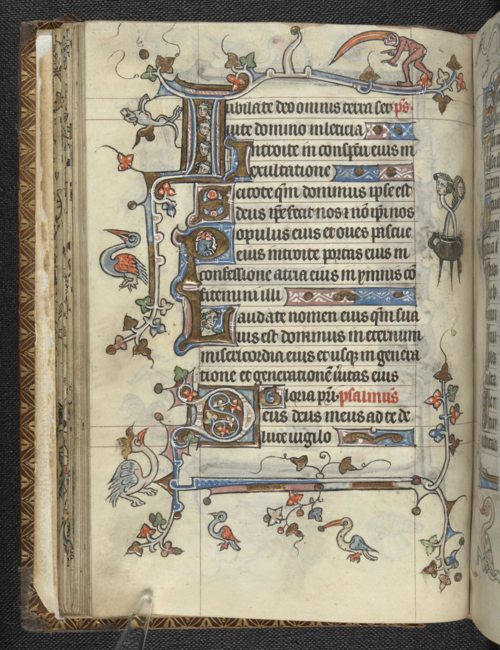 Page from the Hours of the Virgin with border and margins decorated with birds,  Add MS 36684, f.31v

Large historiated initials have scenes from the life of Christ, including the Nativity: here the angel appears to the shepherds, one of whom is playing a bagpipe-like instrument. 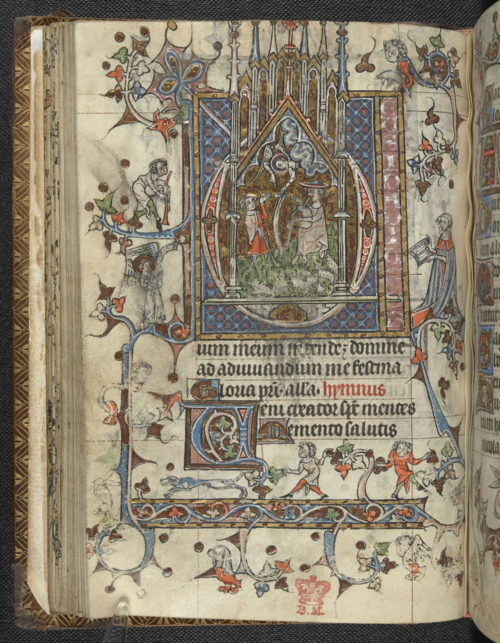 Historiated initial with the angel appearing to the shepherds and decorated border,  Add MS 36684, f.43v

This Book of Hours was owned by none other than John Ruskin in the 19th century. It was in his library at Brantwood and contains his bookplate. Unfortunately there is no record of what he must have made of some of the marginalia!

The images here are just a small selection, evey page is filled with delights. Feast your eyes on our Digitised Manuscripts site, Add MS 36684. You may also like to know that the second half of this amazing book is now New York, Pierpont Morgan Library, MS M.754 (you can see images of it here).

Janus was struggling to get his head round the 5:2 diet!