Our major Magna Carta exhibition contains 202 items, which we selected from a long-list of over 2,000 potential candidates. One of the items that didn't make the final cut was a curious book entitled Magna Carta of Space. Our researcher, Alex Lock, takes up the story. 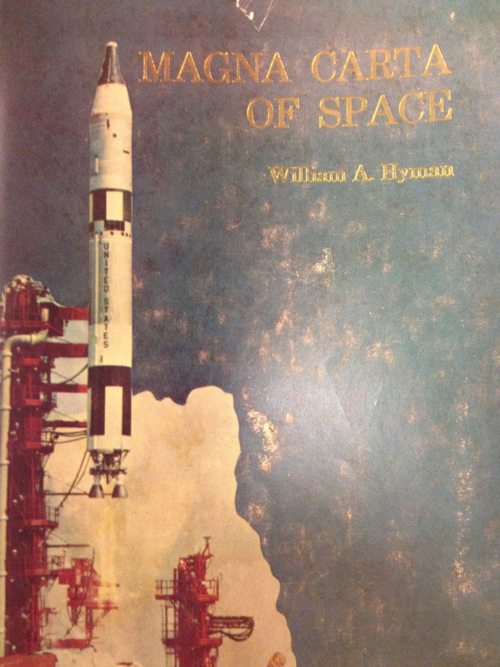 Published in 1966 at the height of the Space Race, and only 5 years after the first manned flight into Space, Magna Carta of Space was an early attempt to codify an interplanetary Space law. Drafted by the distinguished aviation lawyer William A. Hyman, the elaborately illustrated book – and the law code it contained – was the culmination of a decade of passionate and voluble campaigning for a legally binding peace in Space. Hyman described it as ‘a humanitarian bill of rights for the world; the first complete statement of the principles of space law in skeletal form to appear anywhere’. That he named it after Magna Carta – the iconic document of 1215 – was testament to how important he believed was the codification of a new Space law. 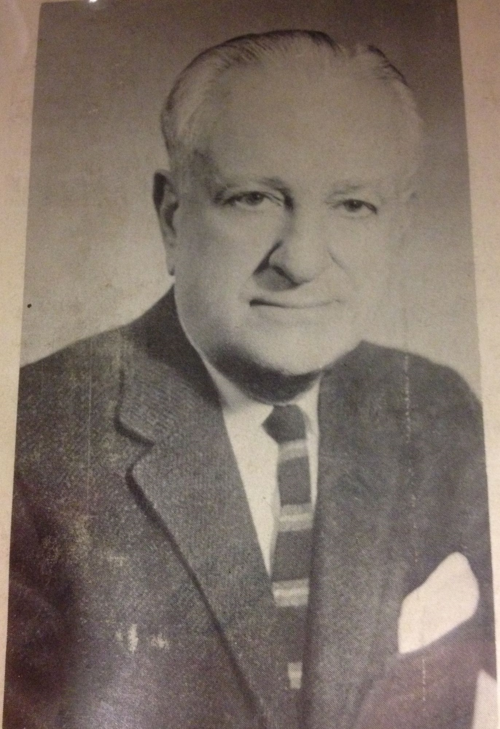 William A. Hyman (d. 1966) as photographed in his Magna Carta of Space

Although the ideas contained within Magna Carta of Space might appear at first sight a little eccentric, if not downright bizarre, they were a serious attempt to begin an international dialogue on Space law. And it worked. Upon its publication in 1966 the book was well reviewed by Life magazine, and it even went on to influence the United Nations Committee on the Peaceful Uses of Outer Space convened in Geneva that same year. 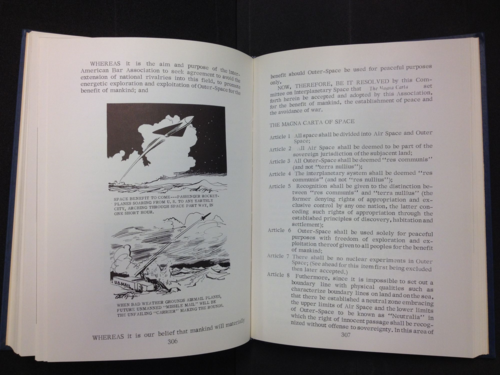 As outer space exploration was unprecedented, it was unclear what issues lawyers might face when legislating for the ‘final frontier’ and what, if any, jurisdiction they had for imposing an intergalactic law code. Furthermore, as so little was known about space, it was largely up to the legislators’ imagination as to what might be legislated for, forcing them to consider unique questions in the history of jurisprudence.

To these unusual questions Hyman sought to give answers – and this accounts for why the book looks so odd. Yet, it was a serious text, with serious aims, written by a serious and experienced lawyer. 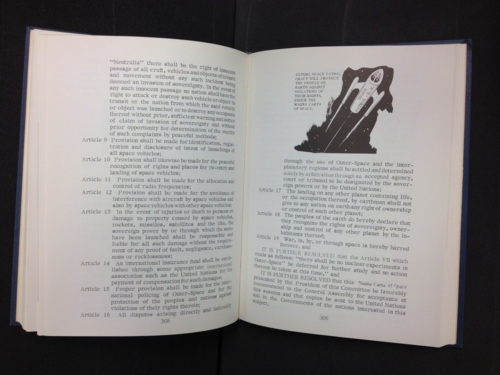 Hyman earnestly foresaw a near future where mail was delivered by rockets and missiles would be a popular mode of transport, connecting human colonies across the galaxy. To ensure the expansion of the human race into Space and to ensure international ‘cooperation and coordination,’ Hyman’s Magna Carta of Space attempted to outline the parameters by which space exploration and colonisation could be safely pursued. Article 6, for instance, declared that ‘Outer Space shall be used solely for peaceful purposes with freedom of exploration and exploitation thereof given to all peoples for the benefit of mankind.’ Hyman was also careful to demarcate Outer Space as a communal domain (Res Communis) separated from sovereign airspace by a buffer zone, named Neutralia, to which all ‘earthmen’ had access. Yet, while Magna Carta of Space encouraged exploration and colonisation, it did not condone imperial expansion and it sought to establish the legal rights of aliens. Article 18 stipulated that ‘The Peoples of the earth do hereby declare that they recognize the rights of sovereignty, ownership and control of any other planet by the inhabitants thereof’. 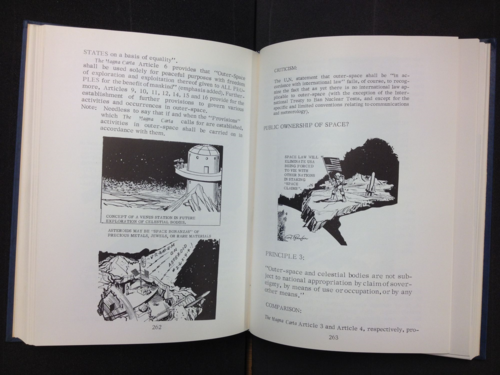 Though ostensibly concerned with Space, Hyman’s priority was securing peace on earth. The book is a clear product of the Cold War and is a powerful polemic against nuclear weapons. Since the first successful launch of a satellite by the Soviet Union in 1957, both the USSR and the USA had developed the capability to launch nuclear missiles from Space, leaving a perpetual nuclear threat literally hanging over the world. The 19 articles of Hyman’s Magna Carta of Space are more concerned with restricting the proliferation of nuclear weapons in Space rather than legislating for peaceful extra-terrestrial exploration. Hyman’s book explicitly attempted to restrict the misuse of Space by belligerent nations, with articles 7 and 19 making provisions to ban ‘nuclear experiments in Outer Space’ and the prosecution of ‘War, in, by, or through space … forever’. As Hyman stated in his introduction, it was his expressed wish to create a Magna Carta of Space that was so ‘powerful’ it would ‘compel the proper use of space --- for peace’. An aspiration that we would all do well to follow.

Magna Carta: Law, Liberty, Legacy is open 7 days a week at the British Library until 1 September 2015 (late night openings every Tuesday). Admission costs £12 for adults and concessions are available (under 18s enter for free).