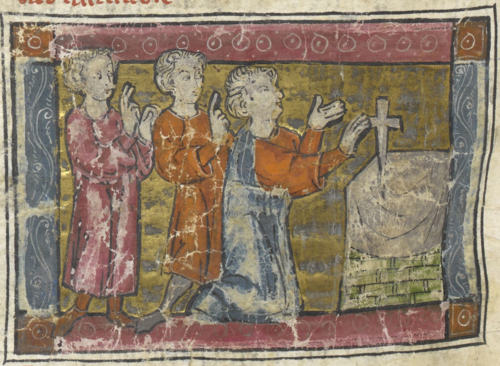 Tristan swearing an oath and being accepted as a knight of the Round Table. Add MS 5474, f. 27v, France, N., 4th quarter of the 13th century

Who was the best knight ever to wield lance or sword? Was it Lancelot, whose love for Queen Guinevere spurred him on to no end of daring-do? Was it his son, Galahad, so pure-hearted that he could even be entrusted with the Holy Grail? Or was it perhaps Tristan, a dab-hand on the tournament circuit, but also a masterful musician? These are some of the questions at stake in the Old French prose Tristan, composed before 1235 in northern France. Its authors took their raw material from the 12th-century verse romances of Tristan and Iseult, but they fused it with the cast, setting and indeed much of the narrative of the so-called Lancelot-Grail Cycle. The result was a runaway success. The prose Tristan was transmitted in French across much of medieval Europe, inspiring translations and retellings of the Tristan legend in several other European tongues. Historiated initial depicting Luce del Gast, one of the authors to whom the prose Tristan is attributed in manuscripts. Add MS 23929, f. 1r, Italy, N. (Padua or Bologna?), 1st quarter of the 15th century

About a quarter of the c. 85 manuscripts of the prose Tristan that survive today were produced in Italy. This list includes Add MS 23929, the first of two volumes discussed here. The first part of this manuscript (ff. 1r-64r) was copied in a regular rotunda script of the late 14th or early 15th century. To judge by the large opening historiated initial depicting the author at work and the 14 smaller ones marking the beginning of chapters, it was made in north-eastern Italy, perhaps in Padua. The volume’s binding lends credence to such a localization: the motifs impressed into the leather, which include suns and dogs, tell us that in the 15th century it was just down the road in Mantua in the library of the Gonzaga family. Indeed, the first part of the manuscript may well be one of more than a dozen Arthurian prose romances listed in the Gonzaga inventory dated 1407. Even with their sizeable collection of Tristan manuscripts, however, the Gonzaga clearly hadn’t had enough of Tristan’s exploits: after the inventory was made, further episodes were added in a different hand (ff. 64r-86v).

The Medieval Francophone Literary Cultures Outside France Project has aimed to trace some of the literary traffic between France and Italy in the Middle Ages, but inevitably some mysteries remain. Add MS 23929 is unusual among the surviving prose Tristan manuscripts made in Italy because it preserves the first part of the romance, including a prologue attributed to the unidentifiable Luce del Gast and the tale of Tristan’s distant (and equally adventure-prone) ancestors. Only after recounting Tristan’s family history does this version give us the story as it begins in other manuscripts of Italian origin, relating Tristan’s birth, his arrival at the court of his uncle, King Mark of Cornwall, and his potion-induced love for the Irish princess, Iseult. The francophilia and bibliophilia of the Gonzaga family may go some way to explaining the presence of the first part of the prose Tristan in Mantua, but the full details escape us for now. 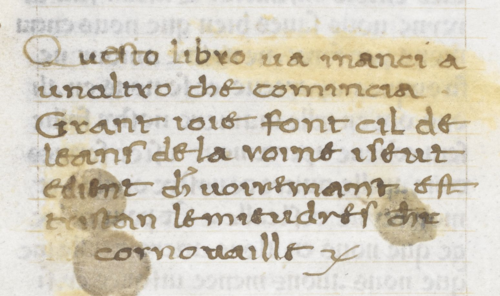 A note in Italian at the end of the manuscript points to the continuation of the story in another volume. Add MS 23929, f. 86v, Italy, N. (Padua or Bologna?), 1st quarter of the 15th century

Additional MS 23929 ends with Iseult’s disastrous honeymoon: shortly after marrying King Mark she is abducted by the Saracen knight Palamedés and will only be reunited with her husband thanks to Tristan’s intervention. A note in Italian tells us that the adventure continues in another volume, which seems to have been listed in the Gonzaga inventory of 1407 but has not survived. In marked contrast to Add MS 23929 is a second prose Tristan manuscript in the British Library’s collections. The text of Add MS 5474 was written in a smaller and rather more angular script, pointing to production in northern France in the (very) late 13th century. Its language bears all the hallmarks of the prestigious Picard scripta of Old French. The conclusions we might draw from the text, moreover, are corroborated by the 26 framed miniatures illustrating the volume: these were in all likelihood painted by the artist responsible for Paris, Bibliothèque nationale, fonds français 110, a Lancelot-Grail manuscript made c. 1295 in the County of Artois or the Cambrésis. There is relatively little evidence of production of Tristan manuscripts in Paris before 1300, but to the north and north-east – beyond the boundaries of the kingdom of France – it was thriving. 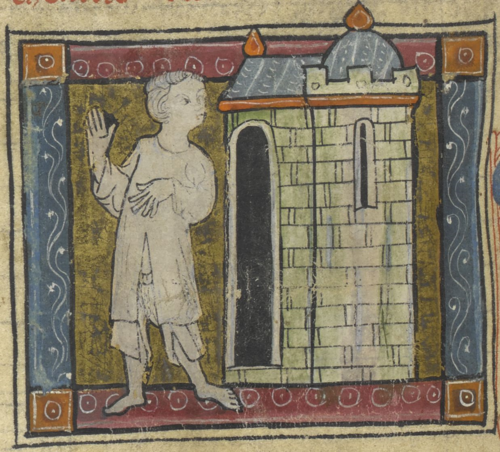 Lancelot escaping in his underpants after being tricked into sleeping with King Pellés’s daughter. Add MS 5474, f. 150v, France, N., 4th quarter of the 13th century

Like several other surviving volumes, Add MS 5474 begins about a third of the way through the romance, with King Mark shamefully ambushing Yvain of the White Hands (and feeling pretty smug about it, too). The ensuing narrative, with its countless jousts and tournaments, is dominated by the spectacular Tournament of Louveserp, at which Tristan even outshines Lancelot, and by the story of the Quest for the Holy Grail, which sees Galahad come to prominence. Add MS 5474 bulks up the Grail story with passages borrowed from the Agravain section of the Lancelot-Grail Cycle (ff. 144r-162v). In one of these interpolated episodes, illustrated in the above miniature, Lancelot makes a hasty getaway from Guinevere’s chambers, dressed only in his underwear. He had been tricked into sleeping with the daughter of the guardian of the Holy Grail. Hardly becoming of a Grail knight! The prose of the Tristan is punctuated throughout by letters, laments and lays in verse. Like the song above, which denounces King Mark as ‘muck and filth’ (to put it politely), these more ‘lyrical’ moments are often easily spotted in manuscripts thanks to their layout as lines and stanzas of poetry, as opposed to the long-lines of prose. The master composer and performer of songs is, of course, Tristan himself. And it is while playing one of his lays on the harp in Iseult’s bedchamber that the villainous Mark murders him. But is Tristan’s musicianship enough for him to be crowned best knight that ever was? You’ll have to explore the prose Tristan to find out...