A Romance from Ward’s Catalogue: Apollonius of Tyre

Harry Leigh Douglas Ward (1825–1906) worked in the Department of Manuscripts at the British Museum for 44 years from 1849, two years after he graduated from Oxford, until his retirement in 1893. During this time he produced the monumental British Museum Catalogue of Romances in the Department of Manuscripts in 3 volumes (the third volume was published posthumously from his notes by his colleague, J. A. Herbert). For medieval scholars this remains an essential reference work on literature, legends and chronicles, as well as a comprehensive overview of the large numbers of manuscripts containing these works in the collections of the British Library. We plan to feature his work in a series of blogposts, focusing on some of the lesser-known tales he catalogued, and featuring images from our online catalogues.

The first volume of the Catalogue, published in 1883, covers the classical romances of Troy and Alexander, the cycles of French and English origin (King Arthur, Charlemagne and William of Orange), and associated legends.

We will start, as he does, with the CLASSICAL ROMANCES: The Troy legend and the Alexander romances have already been featured on this blog. Less well-known is the legend of Apollonius of Tyre, for which Ward lists 10 British Library manuscripts from the 13th to the 18th century, one in French, two in Icelandic and the remainder in Latin (Ward, Catalogue of Romances I (1883), pp. 161–70). The Historia Apollonii regis Tyri, to give it its Latin name, is a prose narrative from the imperial or late antique era, perhaps based on a Greek original, popular throughout the medieval and renaissance periods, and adapted by Gower and Shakespeare. According to Ward, the earliest mention of this work is in a list of books belonging to Wando, abbot of Fontanelle in the diocese of Rouen from AD 742 to 747, which lists ‘Historiam Apollonii regis Tyri in codice uno’. Ward tells us that the booklist is from the Gesta Abbatum Fontanellensium published in Monumenta Germaniae Historica, vol ii of 1829 (Catalogue of Romances, I, p.161). 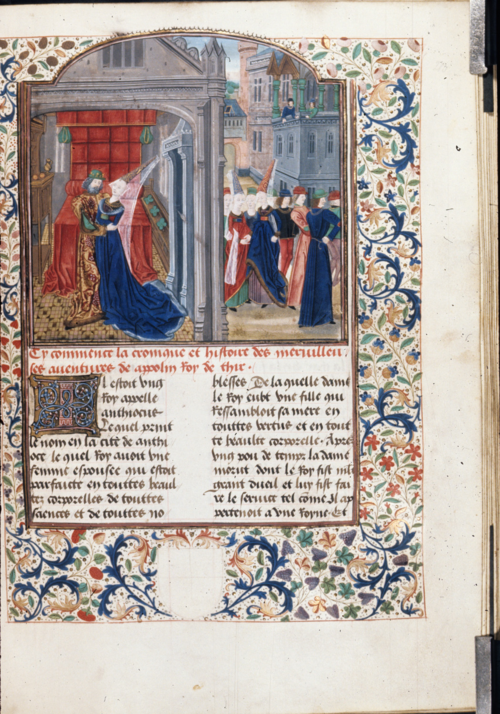 King Antiochus attacking his daughter in her chamber, with a full border containing a space left for a shield of arms, at the beginning of the ‘Historia Apollonii regis Tyri’, Netherlands, S., last quarter of the 15th century, Royal MS 20 C II, f. 210r

The story exists in several different versions, but in a nutshell, is as follows: King Antiochus of Antioch has an exceptionally beautiful daughter, so beautiful that he cannot resist her charms and forces her into an incestuous relationship. Many suitors come to try to win her hand, but the King sets them an unsolvable riddle, then beheads them, whether or not they are able to solve the riddle. Prince Apollonius of Tyre comes to try his luck and is successful, but King Antiochus will not relinquish his daughter. Apollonius flees and is pursued by the king’s men, surviving various shipwrecks and adventures (including more riddle-solving), marrying and later being separated from his wife and daughter, Thasia, both of whom he believes to be dead. He is finally reunited with them and goes on to rule for many years, a virtuous king and faithful husband. In some versions of the legend, the wicked King Antiochus is struck by God’s thunderbolt as he is lying in bed with his daughter — a fitting end!

The earliest manuscript of this text in the British Library is in Sloane MS 1619, dating from the beginning of the 13th century, with a collection of three tales, the others being an abridged version of the Alexander legend and Dares Phrygius’ account of the Trojan war. It was copied in England, probably at the Priory of St Oswald, Gloucester and contains 10 riddles, which Ward lists (Catalogue of Romances, I, pp. 161–63). 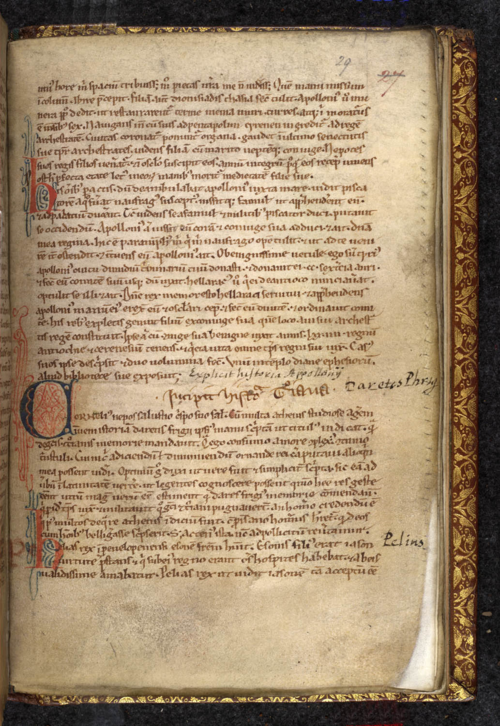 Concluding lines of Apollonius of Tyre and decorated initial at the beginning of Dares Phrygius, England, 1st half of the 13th century, Sloane MS 1619, f. 29r

From the end of the 13th century is Arundel MS 292 (Catalogue of Romances, I, p. 163), in which Apollonius is rather out of place in a devotional miscellany from Norfolk that includes a copy of the Creed, a bestiary in English and various tracts in prose and verse. Ward tells us that this version has only 7 of the 10 riddles and is in 22 sections. There are no photographed folios from Apollonius but here is the opening page of the manuscript with the Creed in Middle English beginning 'I leve in Godd almicten fader / Dat hevene and erthe made to gar': The Creed and the Lord's Prayer in English, with their titles in Latin in red in the margin : 'Credo in Deum' and 'Pater Noster'.  The pressmark of Norwich Cathedral library in the upper margin, England, E (Norfolk) last quarter of the 13th century, Arundel MS 292, f. 3r

Of course, Edward IV had to have a copy of this popular work with lavish illustrations to add to his collection of classical and historical works in French. His volume, Royal MS 20 C II, begins with a version of the prose romance of Cleriadus et Meliadice, distantly related to the Arthurian tales (this will be featured in a later post), followed by the legend Apollonius. The miniature below is taken from this manuscript, the only illustrated version of the legend in our collections. And here at last, is a picture of the eligible Apollonius, kneeling before his future wife, the daughter of Archestratus of Cyrene! He has been shipwrecked on the shore of Cyrene and becomes her lute teacher, then is chosen by her from among her many illustrious suitors to be her future husband. The princess of Cyrene giving Apollonius a letter to her father telling him she has chosen the shipwrecked sailor as her husband, Royal MS 20 C II, f. 217v

The two Icelandic manuscripts, Additional MS 4857 and Add MS 4864 are of much later provenance, copied in the 17th century. Ward had a special interest in Norse sagas, and he provides a comprehensive description of the origin of the texts, scribes and quotations in Icelandic (Catalogue of Romances, I, pp. 167–68). His colleague at the British Museum, J. A. Herbert, wrote of Ward in the Oxford Dictionary of National Biography:

In his early official years he made a catalogue of the Icelandic manuscripts in the British Museum; this was never printed, but is preserved among the books of reference in the students' room. His attention was thus directed, by way of the Norse sagas, to the study of mediæval romantic literature in general, which became henceforth the engrossing interest of his life, and in which, through his wide reading, retentive memory, and sound critical instinct, he acquired exceptional proficiency.

A final word on Apollonius. There is an Old English version of the legend in Cambridge, Corpus Christi College, MS 201, a mid-11th century manuscript containing homilies by Ælfric and Wulfstan. It is an extremely rare early example of prose in the vernacular, and has even been described as the first novel in English!