Last Sunday was the 600th anniversary of the Battle of Agincourt, a key English victory over the French in the Hundred Years War.  We’re very lucky here at the British Library to be responsible for a number of wonderful manuscripts concerning the event itself, key figures at the battle, and its aftermath.  Some of these are now on loan to a fantastic exhibition at the Tower of London that commemorates the battle as part of the ‘Agincourt 600’ celebrations.  The exhibition is on until 31st January 2016, so don’t miss out!  You’ll have the chance to see the pictorial book of arms of the Order of the Garter that belonged to William Bruges, herald to Henry V, and a beautifully written and illuminated manuscript of poetry written by Charles of Orléans during his captivity in England. 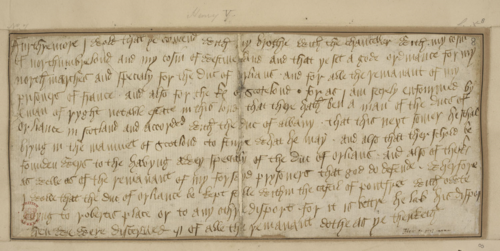 Charles of Orléans is the subject of another exhibit loaned from the British Library: a letter from Henry V himself, most probably written out by his hand, around 1418.  Henry sent orders that the key northern nobles – his cousins Ralph Neville, 1st earl of Westmorland and Henry Percy, 2nd earl of Northumberland; and Thomas Langley, bishop of Durham – should ‘set a gode ordinance for my north marches’, for the duke of Orléans and for other remaining French prisoners.  War on the Continent always left England vulnerable to incursions from Scotland; here Henry made clear that they should prepare against any possible attacks while he himself was preoccupied conquering Normandy.

The order was prompted by reliable intelligence supplied by ‘a man of ryght notable estate’, who had ‘secretly enfourmed’ Henry of meetings in Scotland between a man in the service of Charles of Orléans and Robert Stewart, 1st duke of Albany.  After being taken prisoner, Charles had initially been held in the Tower of London.  When Henry left for France in late July 1417, he had Charles moved north to Pontefract Castle to lessen the likelihood of his rescue or escape.

Now he was worried that the Scots might try to spring Charles from his imprisonment and so ordered a curtailment of his liberties: that he ‘be kept stille within the Castil’ and not go out to ‘Robertis place’.  This was a reference to Methley Hall, a few miles away to the north-west.  It was the seat of Robert Waterton, chief steward of the duchy of Lancaster, whose administrative base was Pontefract Castle and who was in effect Charles’s gaoler.  ‘Bettre he lak his disport,’ Henry concluded, ‘then we were deceyved.’ 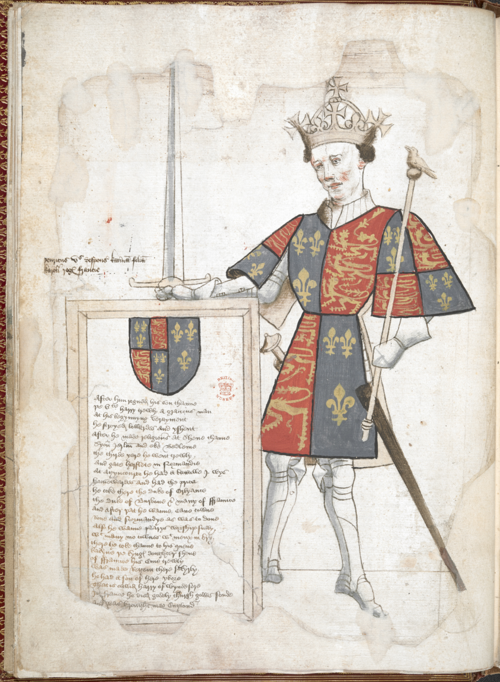 While there is no evidence of duplicity on Robert’s part, it is clear gaoler and gaoled became friends.  An inquest was prompted when it came to light that Waterton’s wife and children had received gifts from the duke.  Fearing that the security of Charles’s imprisonment was becoming compromised by this friendship, Henry had him moved to Tutbury in Staffordshire in 1419 and then Fotheringhay in Northamptonshire the year after that.  Had Charles escaped, it would have been a serious embarrassment for the king.  It would have cost him the substantial ransom money that Charles’s release could have commanded and would have allowed an important French noble to return to the resistance to English expansionism on the Continent.

This letter is fascinating for how it weaves together matters of national security and the custody of a high-profile prisoner.  Henry’s words are formal and direct.  ‘I wole’, he wrote twice in his letter, which is also peppered with imperatives: ‘set a gode ordinance’, ‘dothe as ye thenketh’.  It exemplifies Henry V’s firm grasp of royal government: his ability to delegate, to issue clear instructions, and his command of administrative details, even in the midst of the second campaign in France.

Posted by Ancient, Medieval, and Early Modern Manuscripts at 12:00 AM