This week, many people are planning parties. In the late 10th century, some reforming monks took their cues from the Romans when it came to partying. In a dedicatory letter to his bishop, Ælfheah, the writer and poet Wulfstan the Cantor remembered the party that the monks of the Old Minster, Winchester, had held after the rededication of their church on 20 October 980. The sole copy of this letter is preserved in a nearly contemporary manuscript, which has just been uploaded to Digitised Manuscripts. Translated from the original Latin, the account of the party reads:

‘There were many other bishops… nobles and ealdormen, as well as the great majority of the English royal thegns… [T]hey rejoice in the sumptuous delights which the bishop [Æthelwold of Winchester] decided to lay on for everyone. Course is joined to course, every sort of food abounds: no one is sad, all are joyful. There is no hunger here, where food is in all abundance, and the table stands piled high with a variety of victuals. Circulating wine-stewards delve into the cellars and urge the revellers to begin drinking. They set up great drinking bowls and spice the wine, pouring out innumerable cups of the beverage. And abundant are the cups when the thirsty boor has drained the frothing bowl, honey-sweet in its stream! – in the end he soaks himself from the full drinking bowl itself, jamming it against his bristly chin.’ [Wulfstan of Winchester, Narratio metrica de Sancto Swithuno, in The Cult of St Swithun, trans. and ed. by Michael Lapidge (Oxford, 2003), pp. 378-79.] 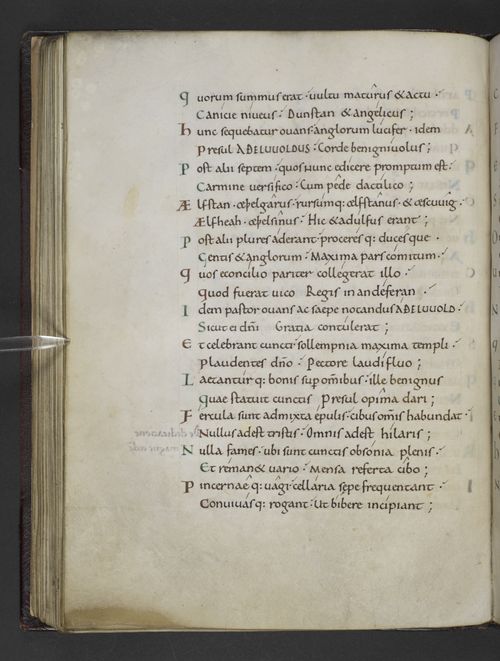 Passage describing the festivities after the rededication of the Old Minster, from a dossier of materials pertaining to the cult of St Swithun, England (Winchester), c. 1000, Royal MS 15 C VII, f. 52 v

Admittedly, Wulfstan’s account is not a straightforward description of the event: rather, he modelled the section about the wine stewards on the Latin poet Virgil’s account of Dido’s feast in the Æneid (Virgil, Æneid, i.723-47). Wulfstan may have been quoting Virgil to show off his learning. Nevertheless, it is interesting that Wulfstan thought that the party Virgil described was a suitable point of reference to describe a celebration at a reformed monastery led by his beloved teacher, St Æthelwold, whom Wulfstan was urging Bishop Ælfheah to emulate. 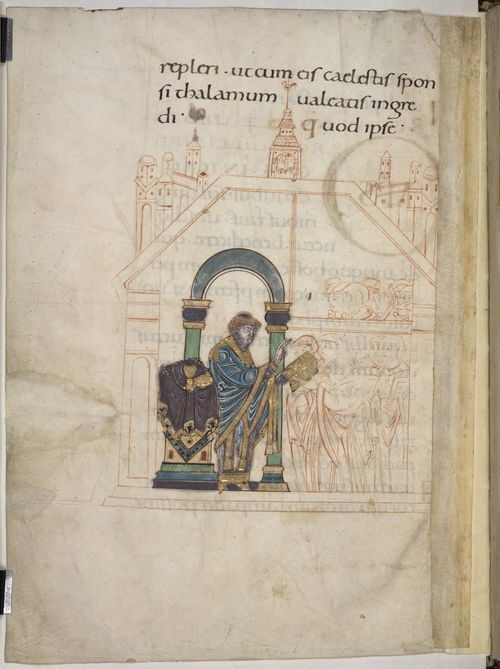 Additionally, there is other evidence for an abundance of alcohol at monasteries refounded by Æthelwold. At Abingdon Abbey, where Æthelwold had been abbot between about 954 and 963, 12th- and 13th-century chroniclers claimed Æthelwold had permitted a generous daily allowance of beer, known as Æthelwold’s bowl, which was supplemented with mead on feast days. Both manuscripts of the Abingdon Chronicle are held at the British Library as Cotton MS Claudius C IX and Cotton MS Claudius B VI.

Detail of a steward pouring drinks and drinkers, from a calendar, England, second quarter of the 10th century, Cotton MS Tiberius B V, f. 4v

Wishing you equally memorable festivities wherever you are!