We are pleased to announce that four of the British Library’s Anglo-Saxon Chronicle manuscripts have been digitised in full as part of our Anglo-Saxon manuscripts digitisation project and are now available on our Digitised Manuscripts website: 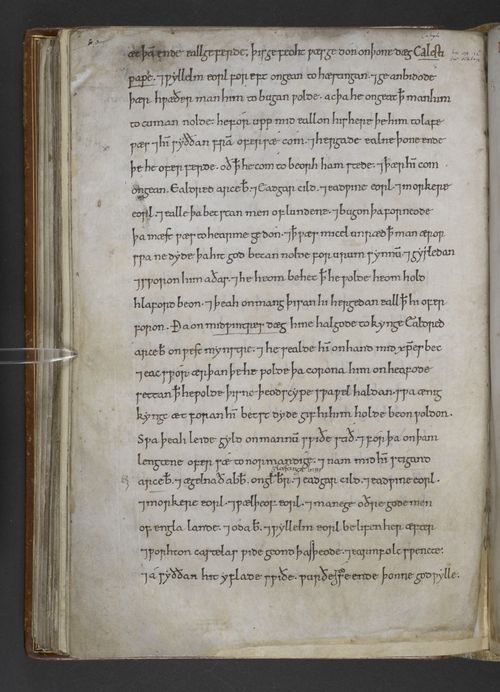 'Always after that it grew much worse': end of the entry for 1066, from the Anglo-Saxon Chronicle D-text, England, mid-11th century, Cotton MS Tiberius B IV, f. 80v

The term ‘Anglo-Saxon Chronicle’ refers to a series of annalistic chronicles, arranged by year, which were written primarily in Old English between the 9th and 12th centuries. These annals record information on a huge variety of subjects from major battles and Viking invasions to famines and agricultural issues, from ecclesiastical restructurings to notes on the death of notable people from across Britain. Some annals even include poems about kings and battles. Although all the annals share some core text—the so-called ‘common stock’, which seems to have been compiled at some point during the reign of Alfred the Great— each text of the Chronicle has its own variations, omissions, and additions. It is therefore perhaps more correct to speak of ‘Anglo-Saxon Chronicles’, as Simon Keynes has suggested.

The manuscripts of the Anglo-Saxon Chronicle are still known by the letters assigned to them in the 19th century. They are:

The Anglo-Saxon Chronicle A: the earliest surviving copy, now Cambridge, Corpus Christi College, MS 173, contains entries written at different times between the 9th and early 11th centuries, with a 12th century continuation. It is sometimes known as the ‘Parker Chronicle’, after Matthew Parker, Archbishop of Canterbury, who gave large parts of his collection of manuscripts to the University of Cambridge and particularly to Corpus Christi College, whose Parker Library is named after him. 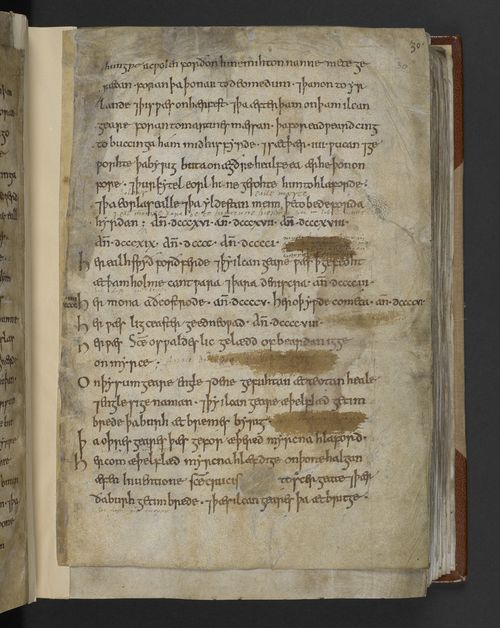 Page with the start of the Mercian Register, from the Anglo-Saxon Chronicle B-text , England, c.977-1000, Cotton MS Tiberius A VI, f. 30r

The Anglo-Saxon Chronicle C: Cotton MS Tiberius B I, copied in the eleventh century and related to the B-text. 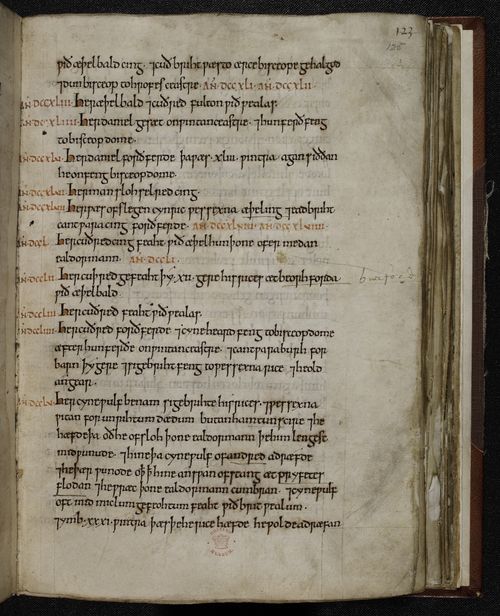 The Anglo-Saxon Chronicle D: Cotton MS Tiberius B IV, copied in the mid-late eleventh century. The added information it contains about Worcester and York has led some scholars to suggest it was written in the North or based on a ‘Northern Recension.’ 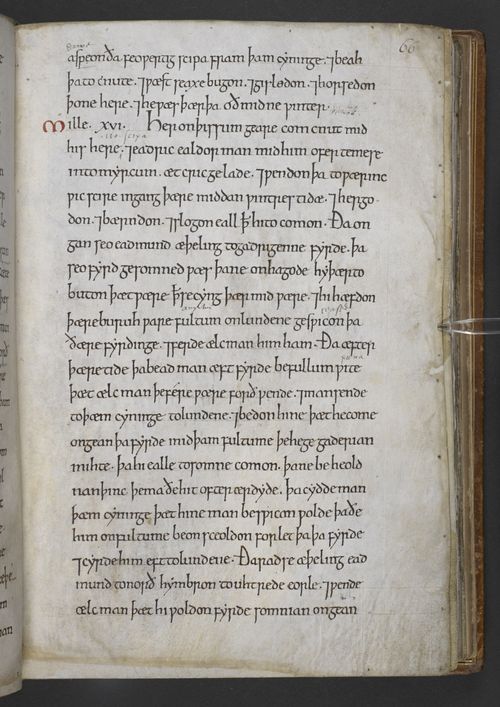 Page with the start of the entry for 1016, from the Anglo-Saxon Chronicle D-text, England, mid-11th century, Cotton MS Tiberius B IV, f. 66r

The Anglo-Saxon Chronicle E: copied and compiled in the twelfth century at Peterborough Abbey, and sometimes known as the ‘Peterborough Chronicle’. It is currently in Oxford, Bodleian Library, Laud Misc 636.

The Anglo-Saxon Chronicle F: Cotton MS Domitian A VIII, written in the late 11th century at Christ Church, Canterbury. This is notable for being a bilingual version of the chronicle, with Latin versions of each annal following the Old English versions. 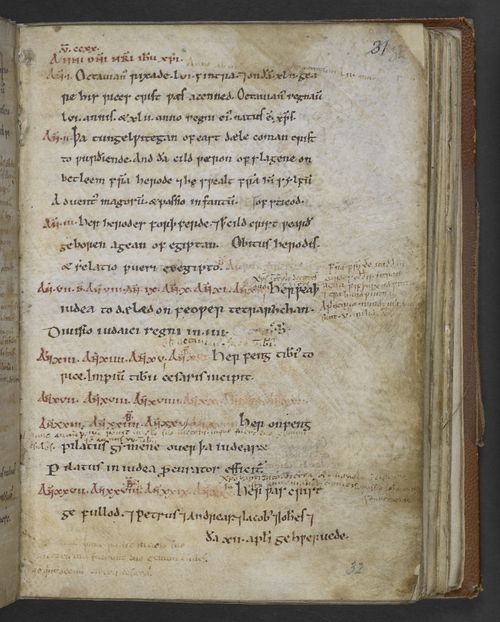 Additionally, several fragments of the Anglo-Saxon Chronicle survive, which are kept at the British Library. These include the G fragment (in Cotton MS Otho B IX and Cotton MS Otho B X), which seems to contain early entries but was burnt in the Ashburnham House fire of 1731. Additionally, H, also known as the Cottonian Fragments, is contained in Cotton MS Domitian A IX.

The British Library has also recently digitised a separate series of Easter table annals that were kept and compiled at Canterbury in the mid-and late-11th century. These annals notably did not mention the Norman Conquest, although a later hand added ‘Her co[m] Willelm’ to the annal for 1066. 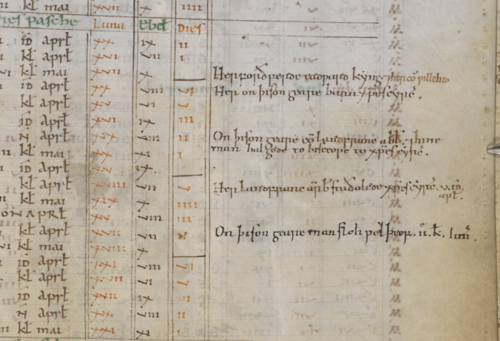 All these manuscripts have had varied and colourful histories, which are reflected in the medieval additions and early modern annotations scattered throughout, and in the modern period some of the Anglo-Saxon Chronicle manuscripts have been bound with other interesting texts which we have now digitised as well. These include the 11th-century copies of the Old English version of Orosius’s Historia adversus paganos and the poems Maxims II and the Menologium (in Cotton Tiberius B I); the earliest surviving fragments of the early twelfth-century Latin legal compilation Quadripartitus and a list of Welsh cantrefi (in Cotton Domitian A VIII); cartularies from Ely and Gloucester (in Cotton Tiberius A VI and Cotton Domitian A VIII, respectively); and a variety of anonymous late medieval and Anglo-Norman chronicles, all now available online. 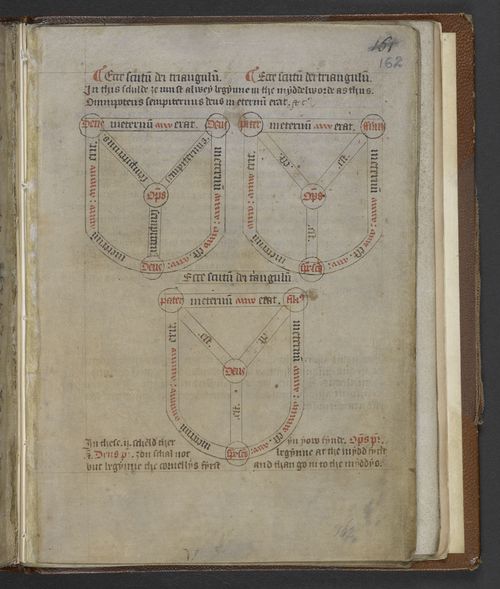 Posted by Ancient, Medieval, and Early Modern Manuscripts at 12:00 AM