Exploding Eyes, Beer from Bath-Water and Butter from Nettles: the Extraordinary Life of Brigid of Kildare

Today, February 1st, is the feast day of saint Brigid of Kildare (d. c. 524).  Brigid or ‘Brigit’ or ‘Bride’ was a virgin and abbess, and is the patron saint of dairymaids, poets, blacksmiths and healers. She is one of the most popular medieval Irish saints, with numerous churches and shrines dedicated to her both in Ireland and elsewhere. Her iconographical emblem is the cow.

There are multiple versions of the life of Brigid in both Old Irish and Latin. The earliest, written in Latin, dates from around a century after her death. All the versions are hazy in their biographical detail, but what they lack in biography, they more than make up for with colourful miracle stories.

A lot of the stories about Brigid, in each of the versions of her life, or ‘hagiography’, revolve around food – we find miracles associated with milk, butter, bacon and also beer. The library holds a very early manuscript of one of the Latin versions of Brigid’s life, Additional MS 34124. It dates from 850 and comes from Benediktbeuren in Germany. There is a story in this manuscript about how one night Brigid was expecting guests and realised she was short of food. Fearing that the evening’s feast would be ruined, she was able to change nettles into butter and tree bark into ‘the richest and most delicious bacon’. (Chapter 119)

Many of these miracle stories mirror stories from the Gospels. In John 2:2-12, we find the story of how Christ turns water into wine at the Supper at Cana. In the earliest Latin life of Brigid, by Cogitosus, we find a similar story in which Brigid realises she has no beer to give to her guests, whereupon ‘with the power of her faith’ was able to turn bath-water into beer. (Chapter 8)

Alongside the miracles associated with food and beer, there are also miracles involving amorous misadventures. A story from the earliest Irish life, from a manuscript in the Bodleian library in Oxford (MS Rawlinson B. 512) describes how a man came to Brigid’s house and asked for her hand in marriage. Having sworn a vow of virginity, Brigid was not taken with the idea. She declined the offer, but - ever magnanimous – offered her suitor an alternative. The text relates how she instructed him to go to a wood to the west of his house. In the wood, she tells him, he will find a house in which there is a beautiful maiden – he will know her because she will be washing her father’s head. Perhaps fearing that the suitor’s charms might be lost on this maiden, Brigid tells him ‘I shall bless your face and your speech so that they shall take pleasure in whatever you will say’. (Chapter 15) Brigid might make a suitable patron saint for first dates as well.

One of the Latin lives has a different version of this story. In this version Brigid is encouraged to take the hand of her suitor by her father and brothers. Reluctant to do this, she prays to God to be afflicted with a bodily deformity, whereupon, the life describes how ‘one of her eyes burst and liquefied in her head’. (Chapter 19)

A much later writer, Gerald of Wales (d. c. 1220) in his topographical guide to Ireland, dedicated to Henry II, has extensive descriptions of Brigid’s abbey and shrine. He describes a fire kept burning at the shrine, which is tended by a small group of nuns. The fire never goes out, and despite burning for centuries, it never produces any ash. It is surrounded by a hedge, which no man is allowed to enter. Only women are allowed to tend to the fire and to blow on it. Gerald relates a story about how an archer lept over the hedge and blew on the fire. On jumping back over the hedge, the archer began to lose his senses and blow into the faces of everyone he met. Then, consumed by thirst, he begged his friends to take him to some nearby water, where he drank so much that he burst. (Chapter 77)

You can see an image of Brigid’s fire, from a manuscript of Gerald of Wales’ Topographia Hiberniae (Royal MS 13 B VIII, f.23v) held at the library here. In the right of the image we can see the archer ill-advisedly blowing on the fire and then subsequently attempting to sate his thirst at a river.

Here you can see two of calendar pages from Books of Hours (prayer-books) for the month of February. In them, you can see saint Brigid’s name at the start, next to February 1st. This one (Additional MS 21114, f. 1v), produced in Northern France in the thirteenth century, shows a man cutting branches. The word ‘brigide’ is visible in the third line. 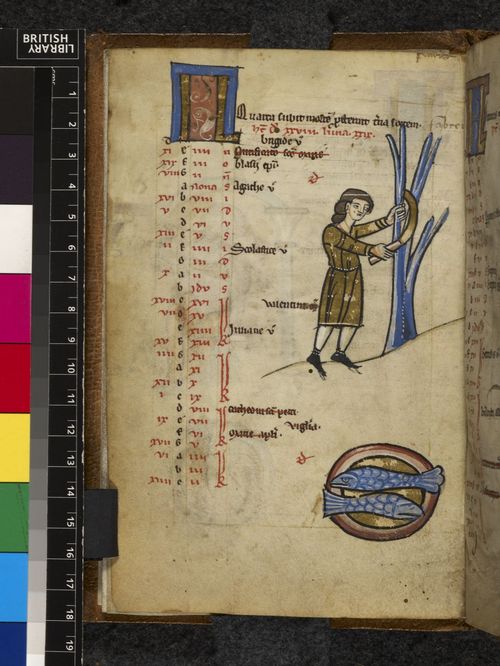 In this one (Egerton MS 2076, f. 2r) produced in Germany in the early sixteenth century, the words ‘Brigide virginis’ are visible in the second line. 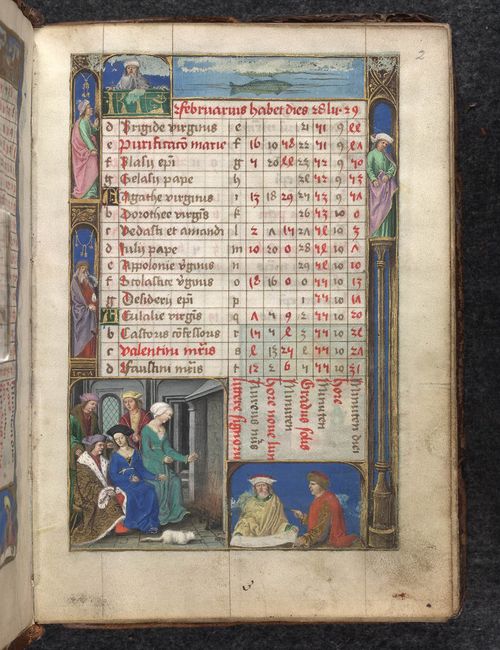 For a translation of the earliest life of Brigid in Latin, by Cogitosus, see S. Connolly and J.M. Picard, ‘Cogitosus: Life of Saint Brigit’, Journal of the Royal Society of Antiquaries of Ireland, 117 (1987), 5-27.

A translation of another version of the Latin life, from a manuscript found in the library’s collection can be read in S. Connolly, ‘Vita Sanctae Brigitae: Background and Historical Value’, Journal of the Royal Society of Antiquaries of Ireland, 118 (1988), 5-49.

A translation of Gerald of Wales’ Topographia Hibernica can be read in Gerald of Wales, The History and Topography of Ireland, ed. and trans. by John J. O’Meara (Harmondsworth: Penguin, 1982).

Posted by Ancient, Medieval, and Early Modern Manuscripts at 5:00 PM

Terrific stuff! Prepping talk on LOVE with as much silly stuff as I can locate....the exploding eyes sound just the ticket!