2016 marks the 400th anniversary of the death of the William Shakespeare, arguably the world’s greatest playwright. Special events, performances and exhibitions will be held around Britain and across the world to celebrate Shakespeare and his literary legacy, and the British Library is delighted to have loaned a number of significant manuscripts to the Folger Shakespeare Library’s exhibition Shakespeare, Life of an Icon.

This fascinating exhibition brings together some of the most important original documents relating to Shakespeare’s life and career. One of the exhibition highlights, loaned to the United States for the first time ever by the British Library, is a page from ‘The Booke of Thomas Moore’, which is believed to contain Shakespeare’s own handwriting (Harley MS 7368, folio 9). 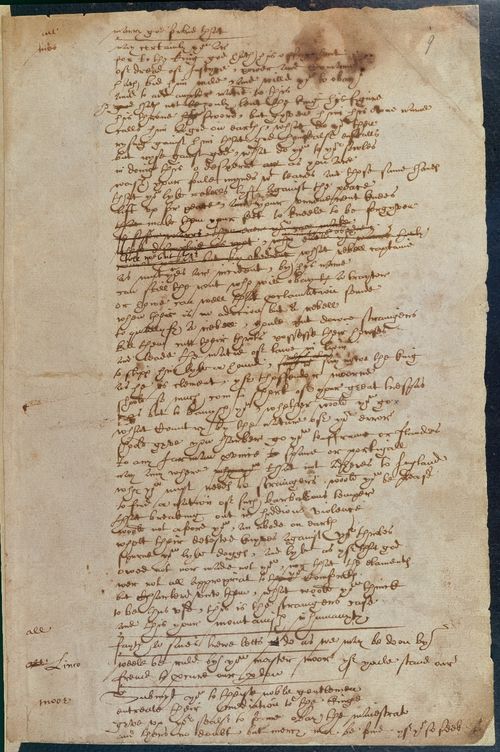 Page containing Thomas More’s speech to the rebels, thought to be written in the hand of William Shakespeare, Harley MS 7368, f. 9r

‘The Booke of Sir Thomas Moore’ traces the rise, career and downfall of Henry VIII’s staunchly Catholic Lord Chancellor, Sir Thomas More, who was executed for treason on 6 July 1535 for refusing to acknowledge the Royal Supremacy over the Church in England. British Library Harley MS 7368 is the sole surviving copy of the play and its great importance lies in the fact that it is thought to be the only literary manuscript to survive from the pen of England’s greatest playwright, William Shakespeare.

The original text of the play was written sometime between 1596 and 1601 by Anthony Munday in a draft that is now lost to us. However, Munday also made a fair copy of the play for use as a theatre company’s official playbook. The copy was therefore submitted for a licence to Edmund Tilney, Master of the Revels, who noted the cuts and revisions that he required to be made to politically sensitive scenes before public performance. It was most likely in response to Tilney’s censorship notes and deletions that the play was extensively revised c. 1603-4 by the dramatists Henry Chettle, Thomas Dekker, Thomas Heywood and William Shakespeare, as well as a copyist whose task it was to pull together the original text and the later revisions to create a performable play. As a result, Harley MS 7368 is a complex patchwork of collaborative writing, revision and censorship. 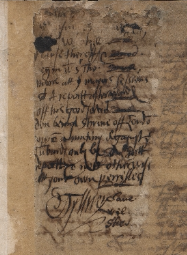 Detail showing Edmund Tilney’s marginal instruction calling for major changes to be made to the script, Harley MS 7368, f. 3r

The first section of ‘The Booke of Sir Thomas Moore’ centres on the Evil May Day riots of 1517. Thomas More, as under-sheriff of the City of London, is portrayed as taking a leading part when he makes an eloquent speech to quell the riots led by angry native Londoners against French and Lombard immigrants living in London. Edmund Tilney strongly objected to the insurrection scenes and ordered them to be cut from the play. No doubt his censorship was influenced by the fact that the play coincided with a period of economic instability and citizen unrest against ‘aliens’ and ‘strangers’. On the basis of stylistic, linguistic, palaeographic and orthographic evidence, the replacement insurrection scene and More’s powerfully persuasive and conciliatory speech to the rebels are now widely accepted as being the autograph composition of William Shakespeare.

More begins his speech by expressing his horror at the inhumane behaviour of the rebels and tells them that their actions are an affront to the majesty and dignity of England and royal authority. Using logic and clear reason, More appeals to the rebels to change their view of the strangers and to see them as fellow humans and victims of prejudice. He also warns the insurgents that they risk encouraging other discontented groups to resort to violence in order to settle their grievances, which will lead to the disintegration of society into a state of unruliness and chaos. Lastly, on folio 9, currently on display at the Folger Shakespeare Library, More tells the rebels that by breaking the King’s law they have sinned against God himself because ‘to the king god hath his offyce lent  / of dread of Iustyce, power and Comaund / hath bid him rule, and willd you to obay’. More therefore urges the angry mob to turn themselves in peacefully and await the mercy of the King. In this respect, the play presents a distorted account of history and Thomas More’s rise to power for it was troops acting under the command of the Earl of Shrewsbury and the Duke of Norfolk that restored order and not in fact More’s eloquent speech.

The British Library is happy to be supporting Shakespeare, Life of an Icon which is open in Washington D.C. until 27 March 2016. Pages from ‘The Booke of Sir Thomas Moore’ will be on display in the British Library’s exhibition, Shakespeare in Ten Acts (15 April – 6 September 2016).

Little Ado About Something Rather Significant: William Shakespeare and Magna Carta