I became in secret the slave of certain appetites 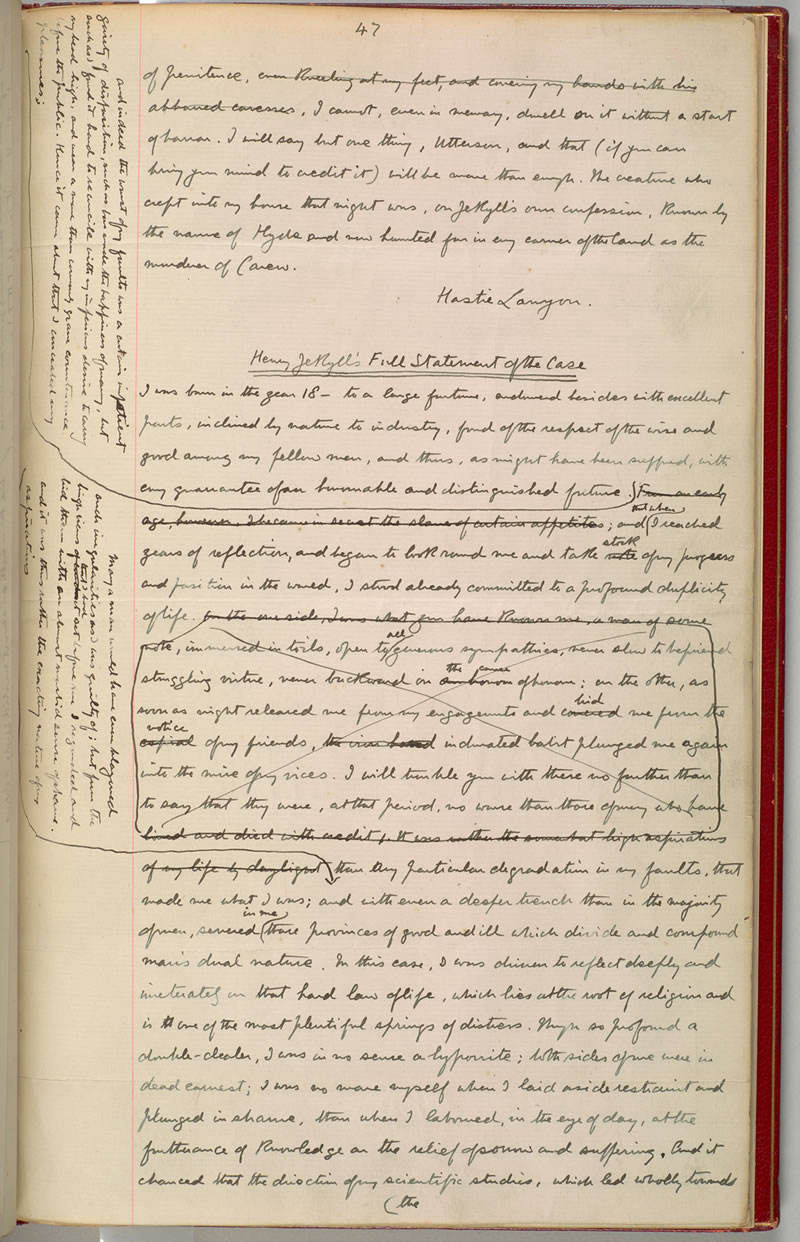 …Not me, this time, but Robert Louis Stevenson’s creation, Henry (Dr) Jekyll. Or at least the first creation of the character in a draft he later censored.

We announced in a piece by Dalya Alberge in the Observer on Sunday that we’re borrowing the original manuscript of Strange Case of Dr Jekyll and Mr Hyde (no definite article, PLEASE - somehow it matters, though I know it shouldn’t) from the Pierpont Morgan in New York.

The story of Dr J is complex- and uncertain. It was written in 1885 while RLS was living in Bournemouth, and under financial pressure to come up with a story - a ‘shilling shocker’ (or, - homophonically better - as the subs on the Observer had it, a ‘chilling shocker’).

The first version apparently came to Stevenson in a dream, but was burnt on his wife’s suggestion, and the two more versions were quickly produced. The version we’re displaying - from the most complete extant draft - has a number of sentences absent from the published version, which seems to hint at a more explicit explanation behind Jekyll’s background and what he calls his ‘Full Statement’: you can see RLS deleting the reference to ‘certain appetites’ on the draft we’re showing, as well as cancelling a confession of being ‘plunged… again into the mire of my vices’.

I’ve added an image at the top – with thanks to our good friends at the Morgan - and closer examination of these hidden appetites and vices will be possible when the exhibition opens on 11 May.

Posted by Jamie Andrews at 9:42 AM

The page open in the exhibition also shows the end of the ninth chapter, signed by "Hastie Lanyon".

The final chapter Jekyll's "Full Statement" should normally be signed too - but it is not: we may imagine that Jekyll no longer has this ability to attest his identity. However... the MS itself, on the last page, is signed "R. L. Stevenson" in the place where we would expect to find "Henry Jekyll".

For a transcription of the two marginal additions (and a comparison with the earlier draft that RLS was copying from) see the blog of the New Stevenson Edition at http://edrls.wordpress.com/2012/04/16/dr-jekyll-ms-at-the-british-library/

Ha, totally! V grateful to the Morgan for lending it back to England- first time it's ever been in London (well since it was written)

I just love the idea of a story within a story - you're so lucky to have the original, even on loan, it must amazing!

Absolutely- also: the murder of Sir Danvers Carew, distinguished MP, in the published version is in earlier drafts in fact the murder of the more disreputable Mr Lemsome- 'a creature...a bad fellow...an incurable cad':- a far cry from old Sir Danvers.It's such a great story of a story

You should read Elaine Showalter's article 'Homosexuality and Late Victorian Anxiety' in 'The Victorian Studies Reader', she talks all about the homosexual undertones in the text and how these have been left out of later version, and have also put in a female character as the victim when she does not have the same importance/existance in the original text.