Our Mutual Friend: Dickens, Staplehurst and the Thames

There are only three days to go before Writing Britain opens to the public on Friday morning, and our exciting loan items have started to arrive. It was great to see JRR Tolkien’s watercolour illustration of ‘The Hill at Hobbiton’ arrive from the Bodleian on Friday and be safely installed into one of the display cases in the Rural Dreams section of the exhibition. This week our two loans from New York arrive, parts of the manuscripts of Strange Case of Dr Jekyll and Mr Hyde by Robert Louis Stevenson, and Charles Dickens’s Our Mutual Friend.

Our Mutual Friend was a really key work for me when planning the Waterlands section of Writing Britain. It’s famous for being Dickens’s last completed novel, and is an enormous tome covering many themes that are still topical today, such as the corrupting influence of money. It’s also notable to us at the British Library because Dickens situated the Boffins’ dust heap (a sort of primitive recycling plant which mysteriously generates a massive income) in the St Pancras area, near the BL site. Warehouses on Battle Bridge Road - near the site of the Boffins' dust heap, behind St Pancras Station. Oxyman [CC-BY-SA-2.0 (http://creativecommons.org/licenses/by-sa/2.0)], via Wikimedia Commons

But the main importance to the exhibition of Our Mutual Friend is that it is such an influential depiction of the River Thames. The poet Algernon Charles Swinburne wrote in 1902 “the real protagonist… is the river… the genius of the author ebbs and flows with the disappearance and reappearance of the Thames”. Dickens presents the Thames as a menacingly gothic place which brings about death and yet sustains and transforms life, repeatedly using a drowning motif. Lizzie and Gaffer Hexam make a living by trawling the river for victims of drowning, emptying the pockets before passing the corpse on to the police; John Harmon fakes his own death by drowning in order to avoid marrying the fortune-hunter Bella Wilfer; whilst Eugene Wrayburn’s near-drowning makes him willing to ignore the class divide and marry the woman he loves.

We’re borrowing two pages from Dickens’s original manuscript of the novel, from the Morgan Library and Museum in New York, where they’ve been since 1944. One is the very first page of the novel, the sinister night-time river scene where Gaffer Hexam pulls a corpse out of the river and chides his daughter, “It’s my belief you hate the sight of the very river… As if it wasn’t your living! As if it wasn't meat and drink to you!”. 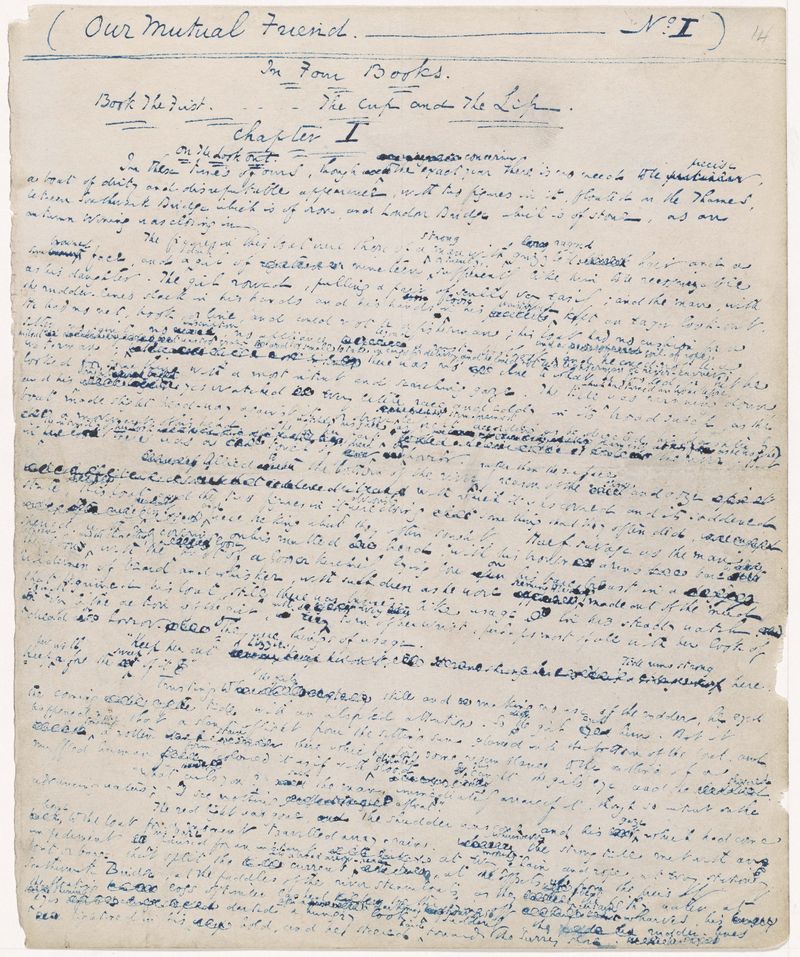 The other page describes the rural part of the Thames, upstream near Shepperton in Surrey, and is from the instalment of the manuscript which Dickens rescued from the Staplehurst rail crash in 1865, an accident in which 10 passengers were killed and which made the shaken-up author a national hero for his role in rescuing the injured. The crash occurred when Dickens was returning on the boat train from Paris to London (via Folkestone), the time of which varied according to the tide. Due to some confusion over the timing of the train, part of the track had been lifted for routine repairs and the train was going too fast to stop, instead jumping over the gap in the rails, breaking apart and partially hanging over the stream running below. Dickens’s carriage (which also contained his mistress Ellen Ternan and her mother) was left hanging over the precipice. Our Mutual Friend, like most of Dickens’s novels, was written in instalments according to a tight publishing deadline, so the loss of an instalment would have been very problematic. After doing what he could to assist the injured, Dickens climbed back into the precarious carriage and retrieved his manuscript.

Dickens made light of the incident in the postscript of the novel, stating

“On Friday the Ninth of June in the present year, Mr and Mrs Boffin (in their manuscript dress of receiving Mr and Mrs Lammle at breakfast) were on the South Eastern Railway with me, in a terribly destructive accident. When I had done what I could to help others, I climbed back into my carriage—nearly turned over a viaduct, and caught aslant upon the turn—to extricate the worthy couple. They were much soiled, but otherwise unhurt.”

However, the Staplehurst incident undoubtedly had an effect on Dickens. Four days after the accident he wrote to a friend, Thomas Mitton: “Suddenly I came upon a staggering man covered with blood (I think he must have been flung clean out of his carriage), with such a frightful cut across the skull that I couldn’t bear to look at him. I poured some water over his face and gave him some drink, then gave him some brandy, and laid him down on the grass, and he said, “I am gone,” and died afterwards… No imagination can conceive the ruin of the carriages, or the extraordinary weights under which the people were lying, or the complications into which they were twisted up among iron and wood, and mud and water… I instantly remembered that I had the MS. of a number with me, and clambered back into the carriage for it. But in writing these scanty words of recollection I feel the shake and am obliged to stop.”

Dickens’s friend and biographer John Forster believed that the Staplehurst disaster had an ultimately fatal effect on the author, and that he never fully recovered from it. Dickens died exactly five years later. 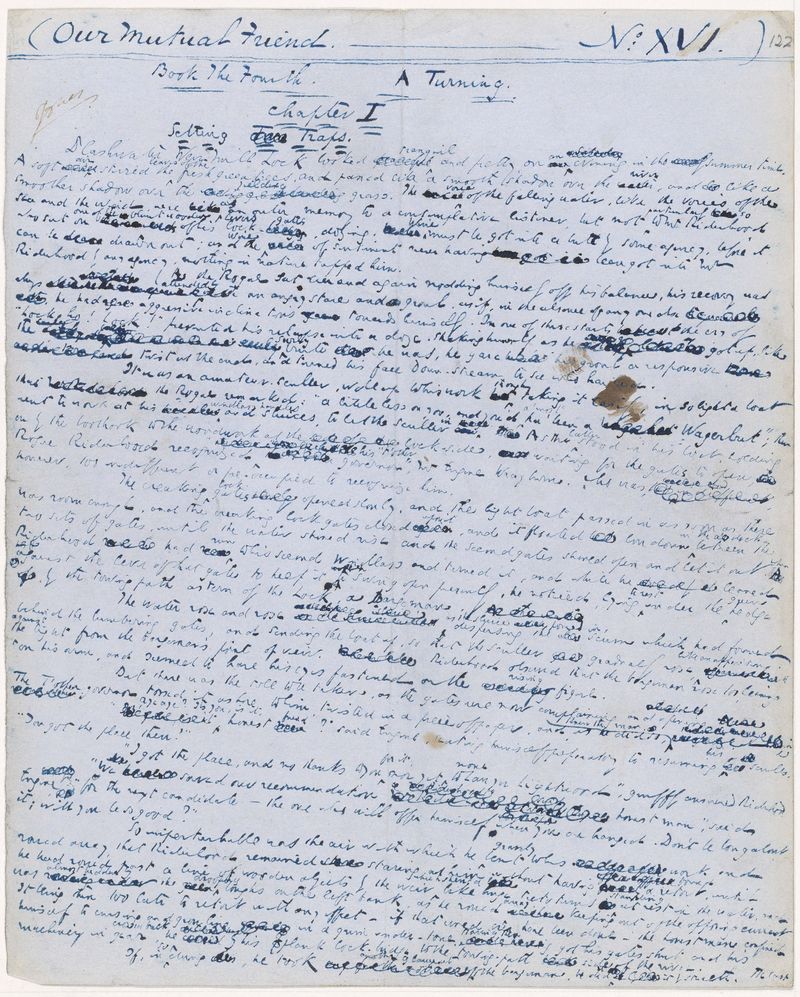 You can see the manuscript in Writing Britain at the British Library from this Friday! Hope to see you there.

Really looking forward to this! Well worth the trip up to London.