With the Library’s Alice in Wonderland exhibition now almost half way through its run I have been thinking about some of the surprising things that I have learnt about Carroll's famous story whilst working on the exhibition. I shared seven facts about Alice as part of one of the breakout sessions at the Alice themed Festival of the Spoken Nerd event that was held at the Library on 1st February and I thought that I would share them here too.

1. It took Lewis Carroll over two years to create the manuscript, Alice’s Adventures Under Ground, after he first told the story to Alice Liddell and her sisters on the 4th July 1862. Carroll recorded in his diary that he had finished the text of the manuscript (which is written in a very neat hand in sepia ink) by February 1863. However Carroll was not a professional artist and it took him more than a year to finish the illustrations. 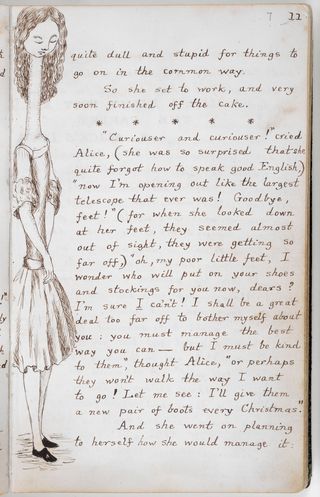 2. Carroll added two new chapters, ‘Pig and Pepper’ and ‘A Mad Tea-Party’ when he reworked the story for publication. These chapters include some of the most famous characters – the Duchess, the Cheshire Cat, the Hatter and the March Hare. It is hard to imagine Alice’s Adventures in Wonderland without some of its most famous and eccentric characters!

3. The model for publication was rather different in the Victorian period. Although Alice's Adventures in Wonderland was published by Macmillan Lewis Carroll bore most of the financial liability for the publication of the book himself. This meant that decisions about all aspects of publication from selecting the illustrator and engraver to the size and colour of the volume were made by Carroll. This may help explain part of why Carroll was so determined that the book should be a success.

4. John Tenniel who illustrated both of the Alice books was blinded in the right eye in a fencing accident aged only 20. Tenniel sustained the injury in a fencing match against his father though he managed to conceal his disability from his father for the rest of his life in order to spare him any guilt. This isn't strictly a fact about the book but I found it so incredible that Tenniel was able to become such a successful artist with such a disability.

5. The first colour illustrations of Alice which are featured in The Nursery Alice (1890) show Alice wearing a yellow dress rather than the blue and white outfit which we often tend to associate with her.

6. The success of Alice’s Adventures in Wonderland can be seen in the range of 19th century merchandise and Alice themed music and theatre which were created. This included Charles Marriott’s Wonderland Quadrilles and the Wonderland Postage Stamp Case which Carroll personally helped to create. 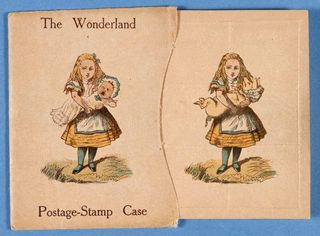 7. Copyright for Carroll and Tenniel’s edition of the book expired in 1907. This meant that any artist who wished to publish their own version of the story could do so. The market was flooded with new editions with twenty being produced between 1907 and 1920 alone.

If you haven’t already seen the exhibition please do visit before it closes on the 17th April. In addition to the free exhibition the Library is also running an interesting series of events based around the exhibition. These include two Ekphrasis poetry evenings inspired by Alice's Adventures in Wonderland on the 4th and 5th March and an Alice in Wonderland Discovery day for all the family on Saturday 20th February.

Finally the Library is running two adult learning courses with Alice themes, Illustrating Alice and Alice and the World of Children's literature which will begin in February and March. Please see the Library’s website for more details.