126 years ago, on 26 July 1887, a modest little  book was published in Warsaw. The book appeared under the pseudonym “Dr Esperanto” and was entitled (in Russian) “International Language. Introduction and Complete Textbook for Russians”. The title-page explained: “In order that a language may be worldwide, it is not enough to call it so”, adding the price of 15 kopecks and the imprint “Warsaw: Printing House of Ch.Kelter, Nowolipie street no.11 1887”. 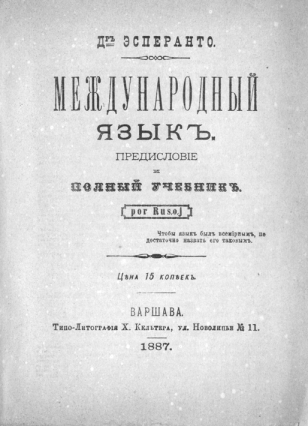 "The First Book" in Russian (picture from Wikimedia Commons)

This “harmless eccentricity”, as the author’s father called it, succeeded in changing the lives of millions of people all over the world and still continues to do so. Esperanto speakers of the world lovingly talk about “La Unua Libro” [“The First Book”], and 26 July is recognised as Esperanto Day.

The creator of Esperanto –  27-year old Ludovic Zamenhof –  published his book first in Russian as it was much easier to receive permission from the severe Tsarist censors for Russian books. His father, Marcus Zamenhof, persuaded his friend A. Lagodovsky, then censor for Russian books in Warsaw, to give permission. Versions in other languages – French, German and Polish – followed the same year. The British Library holds two first editions of “The First Book”: Langue Internationale: Préface et manuel complet por Francoj [12902.aa.45] and Internationale Sprache. Vorrede und vollständiges Lehrbuch por Germanoj [12902.aa.46], both also published in Warsaw in 1887.

The first manual for English speakers was published a year later, again in Warsaw: Dr. Esperanto's International Tongue: Preface and complete method, edited for Englishmen by J St. [12902.aa.55.(1)]. In the words of Zamenhof’s British biographer Dr Marjorie Boulton, the editorial work of J.St. was not a total success:  “one of his early converts, Julius Steinhaus, though himself qualified and produced a disastrously bad translation.”  This poor translation was suppressed by Zamenhof himself and is now a great rarity. Fortunately, an extremely gifted Irishman, Richard H. Geoghegan,  “who at the age of twenty-two had just finished a four-year course in philology at Oxford and received a university prize in Chinese” (Boulton), adapted further manuals for English speakers and became one of the most fervent pioneers of Esperanto. 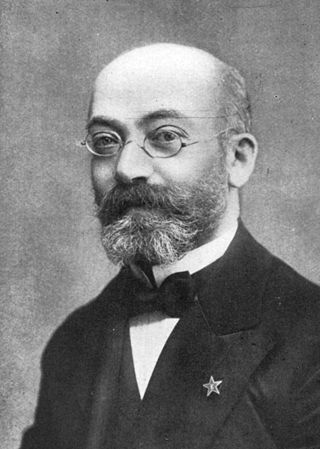 Zamenhof (right, picture from Wikimedia Commons), of course, was not the first man to offer a new language of international communication to the world. Volapük, created only seven years before by Roman Catholic priest Johann Martin Shleyer, was still in fashion. But the genius of Zamenhof was already evident in “The First Book”. It included the“promise form” (“Promeso”) for purchasers: “I, the undersigned, promise to learn the international language proposed by D. Zamenhof, if it appears that ten million people have publicly given the same promise” and eight reply coupons which could be cut out and mailed to the author. It also presented translations into the new language and original poems by Zamenhof himself.  In the words of Geoffrey Sutton,“Zamenhof understood the vital importance of the role of literature from the outset, undertaking the lonely task of testing the language with translated and original writing even before anyone outside his family could share his thought in it”.

One of the biggest linguistic experiments in the history of humankind is still going on. Happy birthday, Esperanto! Feliĉan naskiĝtagon!

Star in a Night Sky. An Anthology of Esperanto Literature.  Edited by Paul Gubbins.  (London, 2012).

Posted by Olga Kerziouk at 1:00 AM