As I recently read in the ‘Trending’ section of the Independent, young people looking for new flatmates have on their list of requirements such qualifications as doing the washing-up and skill in banter.  Wanted: someone who can fire off a zinger.

Banter has a long and illustrious history.

In philosophy, the pre-Socratics, notably Diogenes the Cynic, roamed Greece pronouncing wise words on the spot; they were gathered in gnomonologies such as Diogenes Laertius’s Lives and sayings of the philosophers.  The noble acts of the Greeks and Romans were preserved by Valerius Maximus, Facta et dicta memorabilia.  Two works of erudition to be found on the shelves of any Renaissance man of learning.

Diogenes’s most famous put-down was to Alexander the Great.  Diogenes was at home in his barrel. Alexander asked him, ‘What can I do for you?’  Diogenes riposted, ‘Get out of the way: you’re keeping the sun off me’ (Diogenes Laertius, VI.38). This is the anecdote of his which is most commonly illustrated. 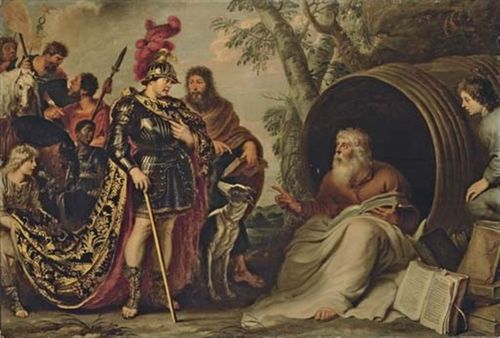 Rhetoric, the art of language, has always valued the quick response, especially for its percussive quality.  As Cicero says:  ‘There are two types of salt: the eloquent and the witty.  Use the first for elegance and the second when shooting the arrows of ridicule.’ (Orator, xxvi, 87).

Antonio Beccadelli, scholar at the court of Alfonso the Magnanimous of Aragon (1396-1458) compiled a whole book of his deeds and sayings:

The king was being pestered over his dinner by an importunate old man.  Said Alfonso: ‘Donkeys leave better lives than kings.  When their masters feed them, they leave them to eat in peace and quiet, something kings can never enjoy.’

The genre in question is the Apophthegm, which sketches the circumstances giving rise to a sharp comment: probably the best-known collection was Erasmus’s.

Two formative influences from my boyhood reading were ‘Useless Eustace’ in the Daily Mirror by Jack Greenall (1905–1983) and Mad Magazine’s ‘Snappy Answers to Stupid Questions’, by Al Jaffee, published from 1964 on. In ‘Useless Eustace’ the joke was in two parts: the situation (rendered visually) and Eustace’s obiter dicta, in the caption.

Looking at a fishmonger’s stall showing a sign reading ‘Smelt’, Eustace says to the fishmonger: ‘Phew! Why the past tense?  They still do.’  The fishmonger’s reaction is represented by an exclamation mark hanging over his head.

Mad’s  ‘Snappy Answers‘ were in the more pugnacious tradition:

Customer in clock shop: Do you carry clocks?
Assistant: No. All we have are these silly round things with numbers and hands.

To end, a sample garnered from the Euston Road.

What Diogenes, King Alfonso and the drunk on the 73 have in common is the desire for the last word.  That’s the mark of a good aphorism: it’s quick, it’s clever, and there’s no answer to it.