This year’s musical anniversaries, especially the bicentenaries of Verdi and Wagner and the centenary of Britten, have so far somewhat overshadowed the centenaries of some momentous events in literature, the visual arts, and music, all happening in Paris in 1913, an annus mirabilis for French and European culture, and the culmination of the  activity that made the city the epicentre of artistic creation in the first years of the century.

Earlier this year, the BBC marked the centenary of some of these events with a series of five 15-minute talks. The programmes looked at Proust’s  Du côté de chez Swann, Alain-Fournier’s Le Grand Meaulnes, and Apollinaire’s Alcools,  all published in 1913, Stravinsky’s ballet The Rite of Spring,  first performed at the Théâtre des Champs-Elysées on 29 May 1913, and, curiously, Cubism (even though the movement dates back to 1907).

Two other events during the same extraordinary year, not covered in the series, were the creation of Debussy’s ballet Jeux and the publication of Blaise Cendrars/Sonia Delaunay’s La Prose du Transsibérien. 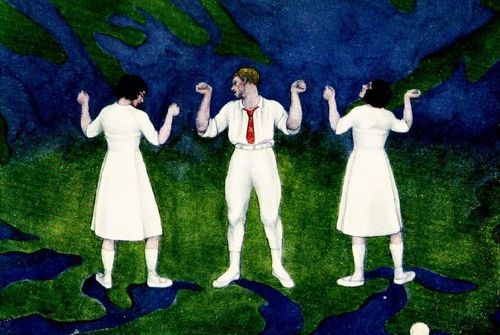 Jeux [Games], Debussy’s last orchestral score, had the misfortune to be premiered by Diaghilev’s Ballets Russes on 15 May 1913, just a fortnight before the same company’s first performance of  The Rite of Spring.  Both ballets were conducted by Pierre Monteux who,  a year earlier, had conducted the first performance of Ravel’s ballet Daphnis et Chloé.  (How many conductors can claim as much?)

Debussy’s ballet (or ‘poème dansé’), was burdened with a scenario and choreography by Vaslav Nijinsky which was much ridiculed by, among others, Erik Satie; the plot involved a man, two women, and a game of tennis. Obviously Nijinsky’s knowledge of tennis was nebulous, as the ball used on stage was nearly the size of a football, and the dancers’ movements resembled those of golfers rather than tennis players.

Jeux was eclipsed by the sensation caused by The Rite of Spring which, ironically, echoed the scandal that greeted, exactly a year earlier, the creation of another short ballet by Debussy, also choreographed and performed by Nijinsky, based on the earlier symphonic poem Prélude à l’après-midi d’un faune, in the final scene of which the faun appears to masturbate. Jeux was subsequently dismissed as an example of Debussy’s declining powers in his last years, and it is only recently that it has been hailed as a masterpiece with echoes of Wagner’s Parsifal and  looking forward to the music of Messiaen and Boulez.

La Prose du Transsibérien et de la petite Jehanne de France [Prose of the Trans-Si berian and of  Little Jehanne of France], a poem by Blaise Cendrars with pochoir illustrations in watercolour and gouache by Sonia Delaunay was published in October 1913. An edition of 150 copies of this ‘first simultaneous book’ was planned; as each was printed on a sheet unfolding to a length of 2 metres, if all the copies were placed end to end they would reach 300 metres, the height of the Eiffel Tower, a symbol of modernity celebrated in the poem and in other paintings by Robert and Sonia Delaunay. In the event, only 60 copies were produced initially and the outbreak of war the following year prevented further printing of what has been called ‘one of the most beautiful books ever created’.

The book was one of the highlights of the 2007-2008 British Library exhibition ‘Breaking the Rules: the Printed Face of the Avant-Garde 1900-1937’. A podcast about it and a zoomable image of it can be found on the British Library website, and there is a modern facsimile available at YK.2011.a.17509.

Very interesting. Thanks also for the links to the Radio 3 talks of which I was not aware.