Like Giuseppe Tomasi di Lampedusa, who is chiefly known for Il Gattopardo (The Leopard), his only novel, Alain-Fournier’s reputation rests almost exclusively on Le Grand Meaulnes, his elegiac, and partly autobiographical, novel of adolescence, adventure and lost love set in a rural setting (the region of  Sologne) evoked with great sensitivity. It first appeared in the Nouvelle Revue Française, from July to November 1913 and was published in book form by Émile-Paul at the end of 1913.[BL shelfmark: 12548.ppp.20]. A few months later, on 22 September 1914, Alain-Fournier was killed in battle on the Meuse, aged 27. 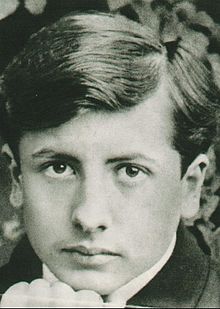 Alain-Fournier in 1904. Image from Wikimedia Commons

Le Grand Meaulnes is one of the classics of French literature. Most French people first come across it at school, and in England it was for years a favourite A-level text. Its popularity with Anglo-American readers can be gauged by the number of different translations of the title – Big Meaulnes, The Great Meaulnes, The Magnificent Meaulnes, The Wanderer, The Lost Estate, and The Lost Domain – and its influence on writers like Jack Kerouac, F. Scott Fitzgerald (especially The Great Gatsby), and John Fowles. Julian Barnes, who, surprisingly, first read it only in his late 30s, has recently written about the novel’s enduring appeal.

Since 1975 the Association des Amis de Jacques Rivière et d’Alain-Fournier, founded by Alain Rivière, the son of Jacques Rivière (Alain-Fournier’s closest friend) and Isabelle Fournier (his sister and the dedicatee of the novel), has been promoting the work of these two writers, through the publication of a six-monthly Bulletin (BL shelfmark: P.901/1770). The Association’s website
is a mine of information: as well as an index of the Bulletin it also lists all illustrated editions of Le Grand Meaulnes (reproducing examples of the illustrations), and all cover illustrations of the novel.

Highlights include John Minton’s illustrations  for the 1947 English translation  of the work. The cover of the 1966 Penguin Modern Classics translation with  Alfred Sisley’s painting Les Petits Prés au printemps (The Small Meadows in Spring)  will bring back fond memories to many a reader of the book. The painting itself, so redolent of the atmosphere of the novel, can currently be seen at the National Gallery (on loan from the Tate).

Despite the popularity of Le Grand Meaulnes and its status as a classic, Alain-Fournier, has so far not entered the prestigious Bibliothèque de la Pléiade,  the ultimate sign of literary recognition in France.