Germany’s renowned literary critic, the “Pope of Literature”, Marcel Reich-Ranicki died on 18 September 2013. Reich-Ranicki was an institution in Germany. His programme Literarisches Quartett (“Literary Quartet”) was a fixed point of the weekly schedule on German TV channel ZDF from 1998 until 2001. The programme’s passionate discussions attracted even those otherwise not so interested in literature to the screen to watch. Yet he mainly had built his reputation through newspaper essays, his reviews featured in the “Feuilleton” (culture section) of the heavyweight Frankfurter Allgemeine Zeitung (British Library shelfmark MF522NPL).

Reich-Ranicki was of Polish-Jewish origin and survived the Warsaw Ghetto and the Holocaust. From 1948-49 he worked as a diplomat in the Polish Consulate-General in London; in 1958 he settled in the Federal Republic of Germany.  Within a short time he grew to be an established figure in West German literary life and became associated with the literary association “Gruppe 47”.

He wrote more than fifty books, including works on Goethe, Thomas Mann and Bertolt Brecht. The British Library Catalogue has over a hundred entries for works by him, edited by him, or about him, including Sieben Wegbereiter: Schriftsteller des 20. Jahrhunderts: Arthur Schnitzler, Thomas Mann, Alfred Döblin, Robert Musil, Franz Kafka, Kurt Tucholsky, Bertolt Brecht. (Stuttgart, 2002) [YA.2002.a.38364]. His autobiography Mein Leben (Stuttgart, 1999) [YA.2000.a.4908] was top of the German bestseller list for several years running, and has been translated into English by Ewald Osers as Marcel Reich-Ranicki: the author of himself (London 2001). [YC.2001.a.21184]. 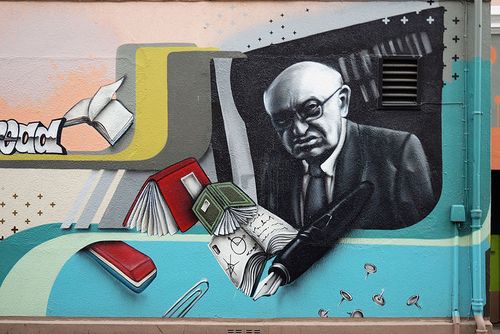 Marcel Reich-Ranicki portrayed in a graffiti mural outside a bookshop in Menden, Germany - a demonstration of his huge public impact and high popular profile. (Image by Mbdortmund from Wikimedia Commons)

Marcel Reich-Ranicki was a friend of literature, freedom and democracy. His death marks the end of an era – not least because it so happens that two of his great contemporaries and friends – Hans Werner Richter, the founder of Gruppe 47, and Walter Jens – also died during the last year.

Thank you for marking Reich-Ranicki's death with a post. I have wondered whether such a person will ever exist again. The loss of the "monopoly" of newspapers, such as the FAZ, to promote one critic's view, the very reduced status of TV (and especially just a handful of chanels made one discuss what was on TV in 'those days') and the remarkable person he was, makes this unlikely. His persona definitely fitted the idea of the serious, intellectual person, and maybe the days of reverring such a persona are also over...