An earlier children’s book in which illustrations have played a key role – and one of the few translated children’s books to attain classic status in Britain – is Johanna Spyri’s Heidi. First published in German in 1880-1881, Heidi became an international success and has come to define Switzerland for many people.

The first edition of the book had no illustrations other than its decorative cover, but the temptation to draw the vivacious Heidi, her adventures and her alpine home – as well as goats galore – was too great to resist, and practically every edition since has included pictures. There are also many simplified adaptations or retellings where pictures are given almost equal weight with the text. 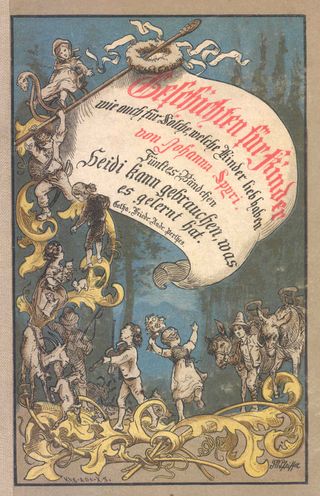 The first illustrator of Heidi, Friedrich Wilhelm Pfeiffer, set the pattern for the characters: Heidi’s grandfather with a long beard, pipe and traditional peasant costume (although Pfeiffer actually portrayed him in Bavarian rather than Bernese dress), and Heidi in a simple dirndl, barefooted and with dark, curly hair. Peter the goatherd is often distinguished by a rather battered hat, and the invalid Clara usually has straight blonde hair, in contrast to Heidi’s dark curls. Heidi herself has sometimes been given a blonde makeover, but most illustrators follow Spyri’s description and keep her dark haired. 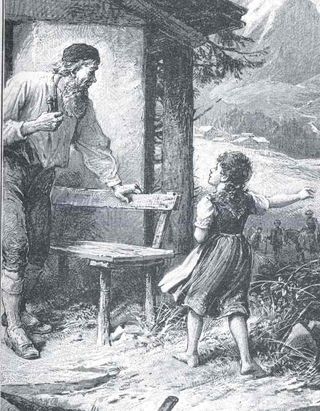 The surroundings are as important as the characters in Heidi. The mountains become central to Heidi’s life – she is both psychologically and physically ill when taken away – and play a vital role in Clara’s healing. Many illustrators created an imaginary ideal of an alpine landscape, but some had travelled in the Swiss Alps and based their pictures on sketches made there. An attractive example of this approach is seen in the pen-and-ink illustrations by Marguerite Davis for a 1927 American edition. 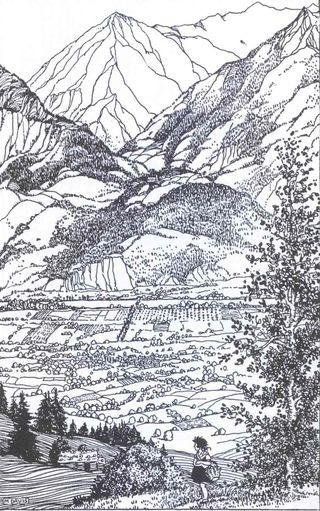 Also characters in their own right are the goats which Heidi and Peter take to the mountain pastures every day, and no illustrated edition is complete without at least one picture of Heidi embracing, leading or standing beside a goat or two. While the characters’ hairstyles and clothes might change slightly to reflect the fashions of the artists’ own times, illustrations to Heidi have tended to remain fairly traditional. The current Puffin Classics edition, despite having gone through various changes of cover design, still has inside the illustrations made by Cecil Leslie for its 1956 printing.

However, some artists such as the French cartoonist Tomi Ungerer have brought a more modern sensibility to the book. The most recent Ladybird picture book edition is an example of this shift, although its spare and stylised look is perhaps surprising in a version for very young readers.

But whether modern or old-fashioned, unsentimental or kitschy, artists  continue to reimagine Heidi and to shape the way in which readers picture not only the story but the very landscape of the Swiss Alps.