In search of the lost palace in Białowieża National Park

We are all so switched on to social media these days that we sometimes forget how recent a development this has been. Every so often, when I go into Facebook, I am confronted by wonderful photographs posted by the Białowieża National Park, a nature reserve in the primeval forest straddling the Polish-Belarusian border. Known for being the last place in Europe that bison still live, the reserve hosts scientific conferences and is a popular resort for walkers and cyclists, as well as for people who simply come to look at the animals and enjoy the enveloping quiet of the forest all around.

But just a decade ago, Białowieża was all but unknown outside Poland and certain scientific circles, and its web presence was negligible. At that time, I was involved in researching the history of the place – originally for a friend’s book (Greg King, Court of the Last Tsar, BL shelfmarks YC.2006.a.13165 and m06/.22031); but we gathered enough information for a long magazine article and finally a website.

Białowieża Park started life as a hunting ground for the Lithuanian and Polish kings, and the forest’s (few) inhabitants enjoyed a tax-free status on condition they looked after it. In due course, following the partitions of Poland, it fell into the hands of the Romanovs, who set about restocking a forest now much damaged and depleted by invasions. Tsar Alexander III, a particularly enthusiastic huntsman with solidly bourgeois tastes, built himself a massive lodge there in the 1890s, transforming the simple estate into an imperial park, complete with outbuildings and landscaped grounds. Polish presidents and Nazi viceroys used it later, but the palace was damaged in World War Two and subsequently torn down. Today, the scientific study centre stands in its place. 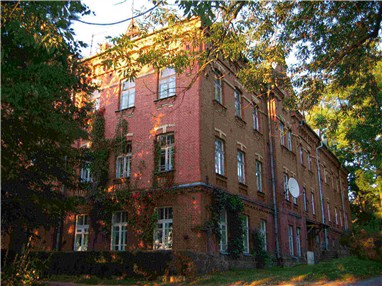 The estate gets odd mentions in memoirs and histories of the late imperial period – particularly of Nicholas II’s reign – but practically nothing was written about it in detail. It took Greg and me some time to even work out where it actually was, but both of us have a particular interest in architecture, and were fascinated by the first picture we saw of the turreted behemoth that had been Alexander’s palace.

Getting to Białowieża  in 2004 proved a reasonable challenge. There was no direct route by public transport from Warsaw, and the resulting car trip took many hours longer than anticipated, mainly due to farm vehicles passing very slowly along the little roads. On the other hand, it was very peaceful and relaxing! The town of Białowieża, two uneven roads lined with wooden houses, has probably not changed greatly since Tsarist days, save for the addition of two modern hotels. The park opens from the end of one street, and in its gatehouse – one of the few remaining traces of Alexander’s gothic fantasy – was an exhibition on the history of the palace. In Polish, of course. 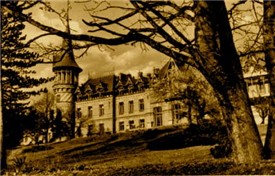 The trip yielded vast numbers of photographs, both of the estate today and of the estate as it was, and they are visible – with some from other sources – on the website we eventually put up,  laying out the contents page in a plan of the Palace Park. A BL colleague assisted with translating Polish sources, to produce what is still, we think, the fullest collection of information on the Palace available in one digital resource.

The Palace in its heyday

These days, of course, there are plentiful photos of the whole estate on the net, and a boutique hotel cashing in on the Tsarist connection has opened in the disused imperial station. There is a direct bus from Warsaw and lots of websites in English. But I don’t think anyone else has recreated the park’s layout online or published lists of the Palace’s rooms! Nor, to our continuing frustration, have floorplans ever surfaced in any published resource or in any archive from St Petersburg to Białystok.

About a year ago, I was contacted by a descendant of the Palace’s architect, Nicolas de Rochefort, who was also seeking information about his (now) obscure ancestor. I offered to send him copies of the photos and plans I had, but ultimately could not find the CD they were on. So, M. de Rochefort, if you’re reading this – I’m sorry, and I hope that soon you can make the trip too!