As citizens of Ukraine, Ukrainian communities worldwide and all those interested prepare to commemorate the 80th anniversary of the Great Famine in Ukraine, known as Holodomor, or Golodomor) tomorrow, it is time to have a look at our holdings relating to this sad event in the 20th century’s history of totalitarian regimes.

In 2003, when collaborating with the Association of Ukrainians in Great Britain  on the preparation of a commemorative exhibition for the 70th anniversary of Holodomor, I put together a select bibliography about the Famine in Ukraine 1932-1933 from the collections in the British Library (published in the catalogue which was prepared for the exhibition: Ukraine 1932-33: Genocide Denied, London, 2003; BL shelfmark YF.2012.a.16782).

Some of most striking photographs in this catalogue are taken from the book by Dr Ewald Ammende (1893-1936) Muss Russland hungern? Menschen- und Völkerschicksale in der Sowjetunion (Vienna, 1935; 8286.i.51). The English translation entitled Human life in Russia was published a year later in London (010290.f.59.). The photographs were taken in Kharkiv, until 1934 the capital of the Ukrainian Soviet Socialist Republic, and its outskirts (one of these photographs is reproduced below). 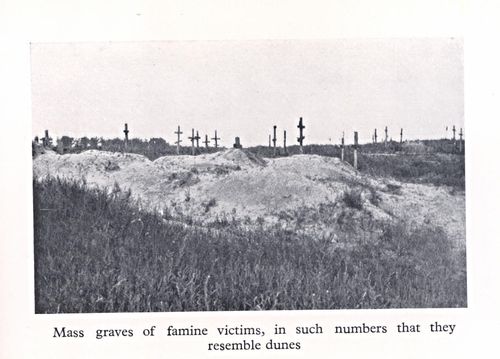 In the 10 years that have passed since that exhibition in London many more books, PhD theses, conference papers, testimonies of survivors, catalogues etc. have been published in Ukraine and abroad as Holodomor Studies has become an international research subject. Some of  the most recent acquisitions in our collections are in English: the papers of the international conference dedicated to the famines in Ukraine and Ireland: Holodomor and Gorta Mór : histories, memories and representations of famine in Ukraine and Ireland, edited by Christian Noack, Lindsay Janssen and Vincent Comerford (London, [2012]; YF.2013.a.4687); The Holodomor Reader : a sourcebook on the Famine of 1932-1933 in Ukraine (Toronto, 2012; YD.2013.a.132). Other important books include After the Holodomor: the enduring impact of the Great Famine on Ukraine by Andrea Graziosi (Cambridge, Mass., 2013) and the new biography of Welsh journalist Gareth Jones, Gareth Jones: Eyewitness to the Holodomor by Ray Gamache (Cardiff, 2013) will join soon.

My own most poignant moment occurred when as a cataloguer I was cataloguing and describing the volumes for the Khmelnytsky Region of Ukraine: Natsionalna knyha pamʹiati zhertv Holodomoru 1932-1933 rr. v Ukraini. Khmelʹnyska oblastʹ (National Book of Memory of victims of Holodomor in 1932-1933 in Ukraine:  Khmelnitsky Region, 2008). Two volumes of this grim “register of the dead” tell a story of incredible suffering in this lovely part of Ukraine known as Podolia. In one of them I found the name of my great-grandfather (on my mother’s side) Teodosiy: age 57, died in spring 1933.

Solemn black volumes for all regions of Ukraine (except Western Ukraine, which, being part of the Second Polish Republic  in the interwar period, did not experience the famine) form a substantial part of the permanent exhibition in the National Museum of the Holodomor-Genocide, which opened in 2008. 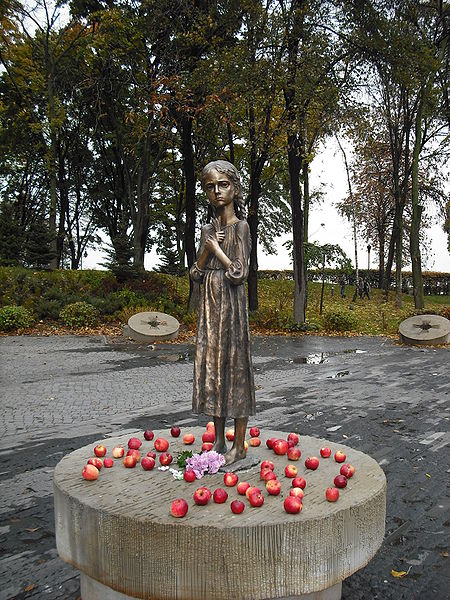 Monument to a girl with ears of wheat (from Wikimedia Commons)

The British Library holds one of the most important sources for the study of Holodomor: the microfilm collection from the State Committee for Archives of Ukraine and Central State Archives of Public Organizations of Ukraine (shelfmark Mic.A.20208 for microfilms and YF.2013.b.887 for printed volumes) filmed by Primary Source Microfilm in 2004. Great thanks to my colleague Rimma Lough (Belarusian, Russian and Ukrainian cataloguer) who lovingly catalogued this huge collection of 158 reels and six printed guidebooks and made them available for present and future researchers. 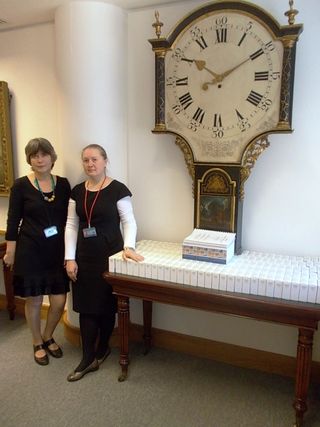 Are you wondering about the monument in Kyiv depicting a young girl clutching a handful of ears of wheat? Find more about the implementation of the 1932 so-called “law of five ears of wheat” in our collections. Listeners can find some interviews of the survivors of Holodomor in our Oral History Collections  thanks to Curator of Oral history Dr Rob Perks, who visited Ukraine in 1991. The very recently created website by the International Holodomor Awareness Committee in Canada “Share the Story” presents testimonies of survivors in English.

A new opera Holodomor by Virko Baley, who worked on it for 30 years, was premiered in Las Vegas this year. The international artistic work on Holodomor, especially in cinema, is still however in its beginning.

Light a candle tomorrow on Holodomor Memorial Day to the memory of millions of people who died from starvation on Europe’s most fertile black soil.