As a teenager, the future poet Pablo Neruda  faced a hazard common to many aspiring poets: parental disapproval. To avoid his stern father’s embargo on a literary career, he decided to publish under a pseudonym, and was attracted by a name which he happened to glimpse in a magazine. He adopted the surname, and achieved fame under it without realising that it belonged to one of the best-loved Czech writers of the 19th century, born on 9 July 1834. 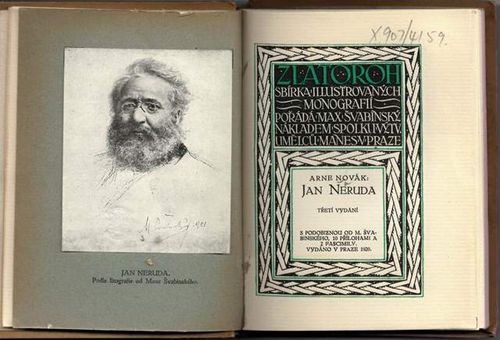 Portrait of Jan Neruda from a  lithograph by Max Švabinský opposite the title-page of Arne Novák’s monograph on the author (Prague, 1920) X.907/4159

Like his future namesake, Jan Neruda could hope for little support for any literary ambitions which he might have harboured as the son of a grocer supplying various barracks in Prague’s Malá Strana (Lesser Quarter). His father, who had fought against Napoleon but failed to make a fortune,  no doubt hoped that his son’s education at Prague’s German schools would equip him for a solid career, but after studying law and trying teaching and the civil service, the young Jan entered a field which still retains a reputation for glamour and insecurity – journalism.

True to the language of his education, he took up his first post on a German newspaper, the Tagesbote aus Böhmen (‘Messenger from Bohemia’). However, in the 1860s it was gradually becoming possible for a Czech speaker to earn a living as a journalist as the efforts of the first generation of the National Revival bore fruit in the form of political, cultural, literary and family periodicals. Although their circulation numbered only a few thousand, the reformers saw them as a means of educating the Czech-speaking public and circulating enlightened political ideas, and thus established a tradition of poets and authors as potential leaders and shapers of national policy which continued into the 20th century and reached its apotheosis in the figure of Václav Havel.

Neruda’s first publication, however, was a small volume of elegiac poems influenced by Heinrich Heine, Hřbitovní kvítí (‘Graveyard Flowers’: 1857; the British Library holds an edition with woodcuts by Petr Dillinger issued in 1941 on the 50th anniversary of Neruda’s death at Cup.408.c.13). In the course of his journalistic career, though, he published 2,260 feuilletons, which form the largest section of his 41-volume complete works. They include sketches from his wide-ranging travels and aperçus of Prague life, both high and low, as well as theatre criticism, political comment, and even a series of articles on the ballet and the history of dance. Although many are not available to readers unable to tackle Czech, the most popular of his works, the collection Povídky malostranské (‘Tales of the Lesser Quarter’; Prague, 1877: 1607/3032) has been translated several times.

Turning the pages of these Realist stories, the reader is transported back to the world of Neruda’s childhood, and the atmosphere of his father’s grocery store is precisely evoked in the first tale with its description of such a shop scented with ‘the odour of fir or pine wood, the tallow and lard, and lastly dried plums, cumin, brandy, garlic and the like’. We encounter all kinds of characters – students, small shopkeepers, servant-girls, doctors, petty officials and purse-proud widows – depicted with a blend of quirky humour, pathos and sharp observation tempered with humanity which has often been compared to that of Dickens.

It is significant that these stories were written at a time when Neruda felt a need to return to the security of his childhood world after the death of his beloved mother. He never married, despite an engagement to Anna Holinová, a long-term relationship with the author Karolína Světla, and two romances with very young girls in later life. His mother, to whom some of his finest verse is dedicated, was the most significant female figure in his life. His various loves, however, inspired a series of outstanding lyric poems, such as the cycle Prosté motivy (‘Simple Motifs’, Prague, 1883; 11586.cc.49/5), whose themes from nature are closely allied to his intimate diaries. His poetry also includes ballads and romances on subjects such as the cosmos, Czech history and Biblical themes, handled with a dry wit and scepticism, as in the ‘Ballad of the Three Kings’, where the infant Jesus roundly declares to his sycophantic visitors:

You kings have come while I am still a child to visit here,
And the apostles’ liberty one day you will revere:
But, when I am full grown to manhood strong,
And after me disciples come to throng,
In terror you will put your heads together in a trice,
And from dull-witted beadles you will go and take advice

The lasting popularity of his poems is evident from the fact that in 1941 the Czech émigré press Čechoslovák commemorated the 50th anniversary of his death with a small volume entitled Jan Neruda: básník vzdoru a víry (‘Jan Neruda: poet of resistance and faith’; X908/82483) introducing a selection of his verse with a preface emphasizing his relevance to the Czechoslovak people during the dark days of the Protectorate. 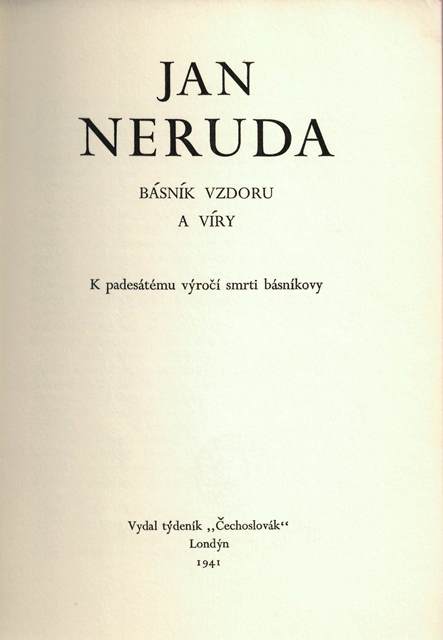 A thorough professional to the end of his life, Neruda wrote to his editor on 22 August 1891 apologizing for his delay in submitting a piece as he was feeling unwell – and died that same day.

The street in the heart of Prague where he was born is now known as Nerudová in his honour, and his grave in the Vyšehrad cemetery overlooking the city is never without flowers. Producing up to five feuilletons a week at times, his dedication provides us with an inspiring example – and he would doubtless have applauded the emergence of the blog as a 21st-century means of carrying on his efforts to disseminate Czech culture and connect the folk of Malá Strana with the wider world. 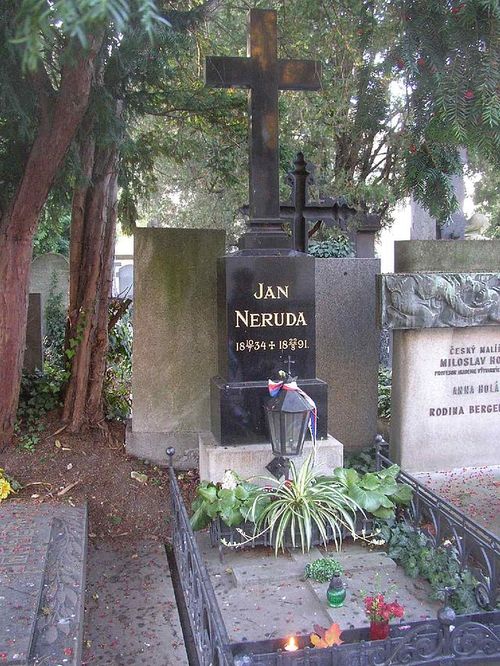