Through the world a mighty voice is ringing…

On 26 July Esperantists world-wide will celebrate Esperanto Day. On this day in 1887 the first manual of Esperanto, known as La Unua Libro, was published in Warsaw. It took the enthusiasts for a new world language 18 years to organise the first international congress in Boulogne-sur-Mer in France in 1905 (photo from Wikimedia Commons below). 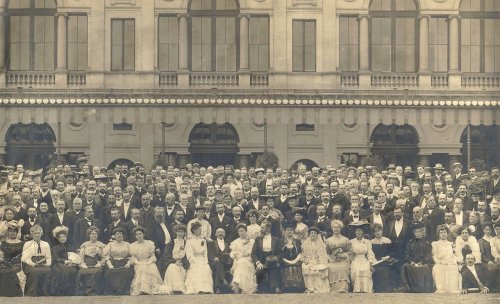 Each year after 1905 a World Congress of Esperanto, known in Esperanto as Universala Kongreso, was held in a different country (and often  continent). On 26 July 2014 the 99th World Esperanto Congress  will open in Buenos Aires (Bonaero in Esperanto), Argentina.

The British Library holds various materials from many congresses. British Esperantists were amongst the most enthusiastic pioneers of the Esperanto movement. No wonder that the Third World Congress of Esperanto (after the second in Geneva in 1906) took place in Cambridge.   Three very remarkable men known as “La Trio por la Tria” (The Three for the Third) were in charge: Dr George Cunningham of Cambridge; Colonel John Pollen, President of the British Esperanto Association, and Mr Harold Bolingbroke Mudie, the Vice-President of the London Esperanto Club. The British Library holds a few books about this congress, amongst them  Kongresa Libro (London, 1907; 012002.eee.22) with a description of colleges and other remarkable places in Cambridge for non-British visitors, a translation of “God save the King” (“Gardu la Regon Di’!”), names of people who financially supported the congress (the sum of £1,925 was secured to guarantee the event), and a list of participants who joined the congress before July 1907 (from K.B.R. Aars from Kristiania in Norway to Mr Zinovjev el Poltava, Ukraine, then in the Russian empire). The English-language booklet The Third Esperanto Congress (London, 1907; YF.2012.a.27398) has 32 black-and-white photographic illustrations by Ian Wilson from Glasgow. The one below, captioned “At the Fitzwilliam Museum”, depicts the arrival of Zamenhof (right) and the Mayor (left). 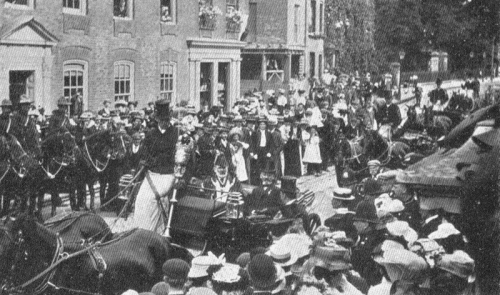 In 2005 the Universal Esperanto Association published a well-illustrated book about the history of Esperanto congresses in 1905-2005: Ziko Marcus Sikosek, Sed homoj kun homoj. Universalaj Kongresoj de Esperanto 1905-2005 (Rotterdam, 2005; YF.2006.a.30996). The title translates as  “But people with people”  and comes from Zamenhof’s  famous speech in Boulogne-sur-Mer. In 1913 the successful 9th Congress, with 1,203 participants, was held in Bern, Switzerland (see the special stamp below). The documentation from this congress, entitled Naua Universala Kongreso de Esperanto (YF.2013.a.209979), was published in 1914 in Paris. 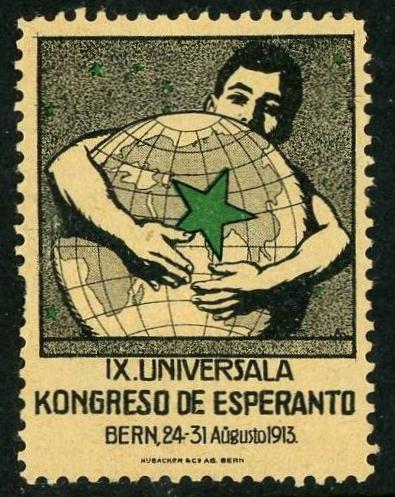 The 10th World Congress was planned for Paris and the preparations were going ahead throughout 1913-1914. More than three thousands Esperantists joined. Postcards depicting the main venue for the congress, the Palais Gaumont, were duly published. The delegates from various countries, including Dr Zamenhof and his family, all subjects of the  Russian empire,  started their journey to Paris by the end of July 1914.  Then the First World War erupted. 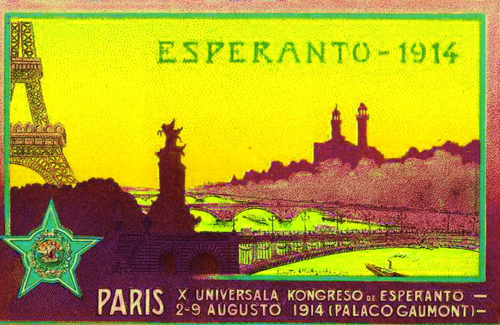 Chromolith postcard for  the 1914 Congress in Paris (from Wikimedia Commons).

For the next four horrible years “a mighty voice” of hope that “all mankind at last will live as brothers” (poem “The Hope” by Zamenhof written in 1893, translated by Terry Page) was drowned by the noise of guns and human cries. Tomorrow thousands of Esperantists of all nationalities will sing again in Buenos Aires the anthem La Espero (The Hope): En la mondon venis nova sento

You can see fragments from the  Congress of Esperanto in Stokhholm  in the documentary film by Sam Green  The Universal Language.