The Drama of Marinetti by Mikhail Karasik 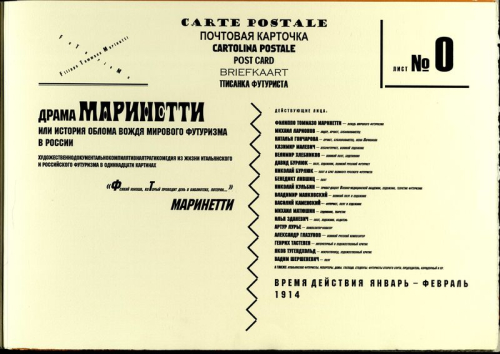 The book is one of a limited edition of 15 signed copies and consists of 12 sheets in the form of large postcards. On one side of each appears a lithographic illustration made with reworked old photographs. On the reverse side appears the offset text of the drama composed from contemporary newspaper and literary sources. The text inside the book is printed in Russian; an English version is designed as a newspaper – The Drama of Marinetti, special issue – and inserted into the book. For a full description see Mikhail Karasik: catalogue raisonné 1987-2010 (Nijmegen, 2010), p.157. 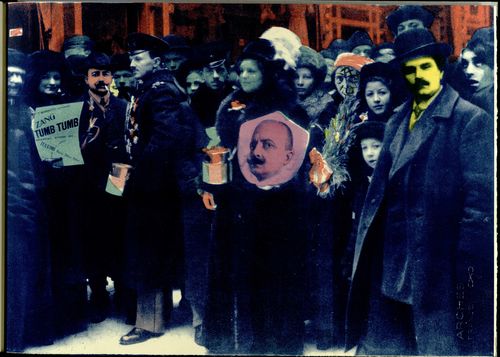 Bearing the sub-title “The Story of How the Leader of World Futurism Flopped in Russia”, it graphically evaluates Marinetti’s  legendary visit to Russia in 1914. Highlighting the differences between Italian Futurism which as Karasik suggests “promoted urbanism, the cult of technology and machines, the destruction of tradition and old culture”, and Russian Futurism which “focused on folk culture, and the Russian icon”, it will complement the British Library’s outstanding collection of Italian and Russian Futurist books. 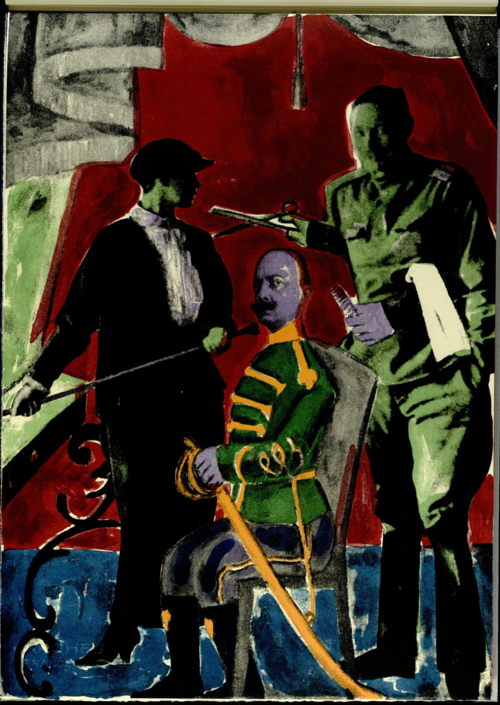 One particularly interesting feature of the book’s graphics is the way in which works of Russian Futurists are referenced in the collaged lithographs. For example sheet no 3 At the Barber’s clearly refers to Larionov’s painting The Officer’s Barber (1910) with the heads of the officer and barber being replaced by those of Marinetti and Larionov; and later in sheet no 5 Marinetti and Venus, Marinetti appears in his car with a figure of Venus familiar from Larionov’s painting of Venus from 1910. 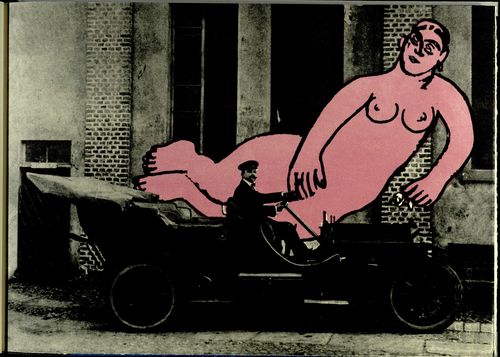 There are several heated debates in the Drama of Marinetti about the nature of Futurist poetry. The Italian approach embodied in Marinetti’s idea of “Words in Freedom” is contrasted with the Russian idea of Zaum’ (transrational or trans-sense language). Whereas Marinetti in scene 7 sees them as essentially the same, Benedikt Livshits sees the Italian approach as maximizing chaos “so as to minimize the intermediary role played by reason” and tries to explain the experiments of Russian Futurists, in particular Khlebnikov. 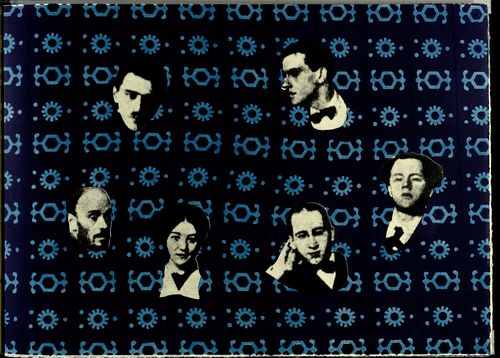 The Studio of Kulbin (Sheet 8)

Marinetti finally, in an aside in the same scene, concludes that “Russian Futurism has little in common with Western Futurism” though he does admit that “when it comes to Futurist music then Russia has to be recognized as taking the lead”. He continues: “In 1910 Kulbin was the first to proclaim the principle of free ‘music of noises’ and now we Italians are merely following in his footsteps”. In recognition of this remark sheet no. 9 Soundnoises (see picture below)  is based on a photograph of the Italian Futurist composer Russolo and some of his sound and noise machines or Intonarumori out of which emerge the heads of Kulbin, Khlebnikov, Kruchenykh and Marinetti. Kulbin’s theories on Free music, Colour music (synaesthesia) etc are set out in Studio of the Impressionists [Studiya Impressionistov, 1910], the cover of which is used as a backround for the superimposed heads of Russian Futurists in sheet no. 8 The Studio of Kulbin (see picture above). For a description of Kulbin’s theories on music see my article on Studiya Impressionistov in The Oxford Critical and Cultural History of Modernist Magazines, Vol. III, Part II, pp.1260-4. (Oxford, 2013; YC.2013.b.1128) Karasik’s book will be an invaluable addition to an already large number of his works held by the British Library. A list of works written and illustrated by him as well as works of others published by him are included in Hellyer, Peter, A catalogue of Russian Avant-Garde Books 1912-1934 and 1969-2003 (London,  2006; YC.2006.b.2068 ). More recent items can be found on the webpage for Russian Avant-Garde Artists’ Books 1969-2010 in the British Library.