On 4 August 1914, the German army invaded neutral Belgium on their way to Paris and a speedy victory. In the event, the Germans met with unexpected resistance from the Belgian army which slowed their progress and allowed time for the arrival of the British Expeditionary Force (BEF).  Accounts from Belgium, Luxembourg, and Northern France of German troops engaged in the mass execution of civilians and the wilful destruction of towns helped mobilise support for the war in Britain as well as influence public opinion in neutral countries such as the Netherlands and Switzerland.  The Germans countered that their actions represented harsh but just punishment for attacks on their troops by civilian snipers (‘francs-tireurs’).  In reality such attacks did not take place in 1914, but the Germans had indeed had to contend with civilian snipers in the Franco-Prussian War of 1870, and so were expecting to come under fire from civilians on this occasion too.

The German writer Arnold Zweig, best known for his later anti-war cycle, Der Große Krieg der Weißen Männer (‘The Great War of the White Men’), based on his actual experiences serving with the German army in Belgium, Serbia and at Verdun, began his literary career penning nationalistic stories fictionalising German propaganda about Belgian snipers. In Die Bestie (Munich, 1914;  012552.i.24/3), the eponymous ‘beast’ is a treacherous Belgian farmer who is justly executed for cutting the throats of three sleeping German soldiers. In Zweig’s later Erziehung vor Verdun (Education before Verdun), on the other hand, the German investigating judge Mertens discovers that ‘In Luxemburg alone over 1,350 houses had been burned, and more than 800 people shot. In Belgium and Northern France the same methods had led to even worse results’.

The ‘sack of Louvain’ (Leuven) and destruction by arson of the university library during the week 25-28 August struck a particular chord both at the time and in popular memory as a wilful attack on a cultured university town, the ‘Oxford of Belgium’. Englebert Cappuyns, a lawyer from Louvain and refugee based in Kingston upon Thames, provided an early eye-witness account in his Louvain: a personal experience (Kingston upon Thames, 1914; 9082.de.15), while the narrative of An eye-witness at Louvain (London, 1914; 09083.b.36(1)) by an anonymous Professor at Louvain ‘furnished through Father Thurston, S.J. of Farm Street’, concentrates on the execution of the Jesuit priest Father Dupiérieux. Albert Fuglister, a Swiss businessman based in Louvain, and present during 25-28 August, countered German propaganda in his Louvain ville martyre (Paris & London, 1916; 9083.f.14). In addition to the usual eye-witness accounts, Fuglister includes many photographs. In an appendix, ‘Comment j’ai  photographié leurs crimes’ (‘How I photographed their crimes’), he explains that he took photographs of Louvain in ruins from 2 September 1914 onwards.  He also reproduces photographs taken by others, in particular the two Arnou brothers.  Photographs from the Arnou album are on show in the 2014 Leuven exhibition Ravaged: art and culture in times of conflict 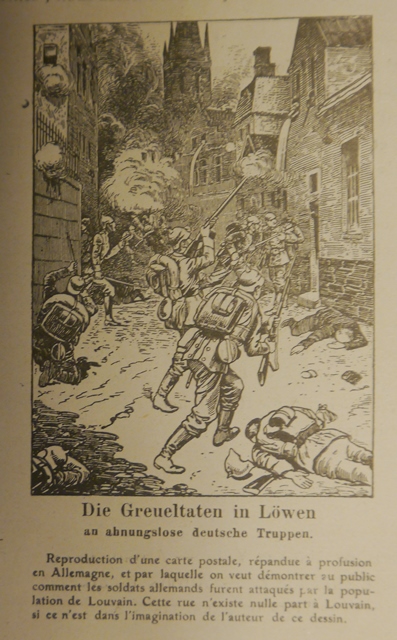 Fuglister reproduces a German propaganda postcard depicting the alleged Louvain snipers (above). The caption reads ‘The atrocities against unsuspecting German troops in Louvain’. Fuglister’s counter caption tells his readers that ‘this widely circulated postcard is intended to show the public how German soldiers were attacked by the population of Louvain. This street does not exist anywhere in Louvain except in the imagination of the author of this drawing’.

Here Fuglister uses before and after photographs of the Grand Hall in Louvain University Library  (below) to highlight the impact of the devastation wrought by the Germans.

The caption explains that the library ‘held [note the imperfect tense] more than 300,000 books, incunabula, manuscripts of incalculable value reduced to ashes in the space of one night. The fragments are found within a radius of five kilometres’.

Fuglister’s book has a preface by the Belgian poet, and Louvain graduate, Emile Verhaeren. Verhaeren, himself a refugee in London and Wales from September 1914 to January 1915, and transformed by his shock at the fate of his country from a cosmopolitan man of letters into a ‘Belgian Paul Déroulède’ used his time in Britain tirelessly producing patriotic verse, and touring the country in support of his native land. His preface to Fuglister’s book mentions an earlier book by a citizen of a neutral nation, the retired Dutch professor L. H. Grondijs, author of The Germans in Belgium (London, 1915; 08028.de.82/2).

As for Louvain University Library, it was reconstructed after the war largely with American money (though see The reconstruction of the Library of the University of Louvain: an appeal for further contributions by Henry Guppy, the Librarian of the John Rylands Library, Manchester (Manchester, 1919; 011903.d.16)). This new library and collection was in turn destroyed in the Second World War. Finally, the Belgians themselves dismantled the new post-Second World War collection when the French-speakers were evicted from the now exclusively Flemish university and the collection was divided equally between the old foundation and the new university at Louvain-la-Neuve.