In the current British Library exhibition ‘Terror and Wonder: The Gothic Imagination’, pride of place is occupied by Horace Walpole’s foundational 1764 shocker, The Castle of Otranto.

The following work was found in the library of an ancient Catholic family in the north of England. It was printed at Naples, in the black letter, in the year 1529. How much sooner it was written does not appear. [...]. The style is the purest Italian. [...]

Whatever [the author’s] views were, or whatever effects the execution of them might have, his work can only be laid before the public at present as a matter of entertainment. Even as such, some apology for it is necessary. Miracles, visions, necromancy, dreams, and other preternatural events, are exploded now even from romances. That was not the case when our author wrote; much less when the story itself is supposed to have happened. Belief in every kind of prodigy was so established in those dark ages, that an author would not be faithful to the manners of the times, who should omit all mention of them. He is not bound to believe them himself, but he must represent his actors as believing them.

It is natural for a translator to be prejudiced in favour of his adopted work [...]  yet I am not

One day, as I was in the Alcana of Toledo, a boy came up to sell some pamphlets and old papers to a silk mercer, and, as I am fond of reading even the very scraps of paper in the streets, led by this natural bent of mine I took up one of the pamphlets the boy had for sale, and saw that it was in characters which I recognised as Arabic, and as I was unable to read them though I could recognise them, I looked about to see if there were any Spanish-speaking Morisco at hand to read them for me; nor was there any great difficulty in finding such an interpreter, for even had I sought one for an older and better language I should have found him. In short, chance provided me with one, who when I told him what I wanted and put the book into his hands, opened it in the middle and after reading a little in it began to laugh. I asked him what he was laughing at, and he replied that it was at something the book had blind to my author’s defects.

So Walpole is but the translator from a found (and then lost) original, and therefore cannot be held responsible for its contents.

Where could Walpole have drawn inspiration for this preamble? Perhaps in one of the best-sellers of his time: Don Quixote. In Book I, chapter ix, Cervantes breaks off his narrative, or rather, he comes to the end of his original:

In the First Part of this history we left the valiant Biscayan and the renowned Don Quixote with drawn swords uplifted, ready to deliver two such furious slashing blows that if they had fallen full and fair they would at least have split and cleft them asunder from top to toe and laid them open like a pomegranate; and at this so critical point the delightful history came to a stop and stood cut short without any intimation from the author where what was missing was to be found. [...]

This reflection kept me perplexed and longing to know really and truly the whole life and wondrous deeds of our famous Spaniard, Don Quixote of La Mancha [...] The discovery of it occurred in this way.written in the margin by way of a note. I bade him tell it to me; and he still laughing said, ‘In the margin, as I told you, this is written: ‘This Dulcinea del Toboso so often mentioned in this history, had, they say, the best hand of any woman in all La Mancha for salting pigs.’

When I heard Dulcinea del Toboso named, I was struck with surprise and amazement, for it occurred to me at once that these pamphlets contained the history of Don Quixote. With this idea I pressed him to read the beginning, and doing so, turning the Arabic offhand into Castilian, he told me it meant, ‘History of Don Quixote of La Mancha, written by Cide Hamete Benengeli, an Arab historian’. It required great caution to hide the joy I felt when the title of the book reached my ears, and snatching it from the silk mercer, I bought all the papers and pamphlets from the boy for half a real; and if he had had his wits about him and had known how eager I was for them, he might have safely calculated on making more than six reals by the bargain. I withdrew at once with the Morisco into the cloister of the cathedral, and begged him to turn all these pamphlets that related to Don Quixote into the Castilian tongue, without omitting or adding anything to them, offering him whatever payment he pleased. [...]

And from then on Cervantes cites Cidi Hamete as his source.

Where did Cervantes get this idea for framing his text? We need look no further than the romances of chivalry of which Don Quixote is in large part a critique. Such subterfuges were a staple of the genre. This section from Baldo has all the elements which Cervantes picked up. In summary:

We three masters and three great rabbis, knowledgeable in herbalism, set sail in search of a great antidote. Off Alexandria we saw an island, more the work of artifice than of nature.  There we found splendid buildings overgrown with wild vegetation: lizards and snakes fled from our sight.  In time we reached a cave, unlit by the sun, where darkness and dampness reigned.  Inside we found a great hall, and in it tombs of marble, one of which showed a statue of an old man with a scroll in his hand reading ‘Here lies Merlino Cocayo, poet of Mantua’. His other hand pointed to a cavity in the wall, with a iron chest labelled ‘Here are the books of the poet Merlino’.  Inside were many books on magic, astrology, medicine and alchemy. At the sound of a great thunder we fled, taking the chest of books with us: these were the herbs we sought. I gave this book to the printers so that it could be better known, in translation.  (Baldo (Seville, 1542); Alvar and Lucía 79-83).

While the author of Baldo uses the lost manuscript to tease the reader in right at the start,  Cervantes was too canny to waste the topos of the lost manuscript right there in the prologue, where he slily says he is not Don Quixote’s father but his (its?) stepfather: he waits until he’s built up the suspense before breaking off to give a false origin to his book.

By way of pictorial illustration  we can only offer a fanciful portrait of  Cidi Hamete, as no authentic likeness of him is known: not is there any authentic portrait of Miguel de Cervantes. 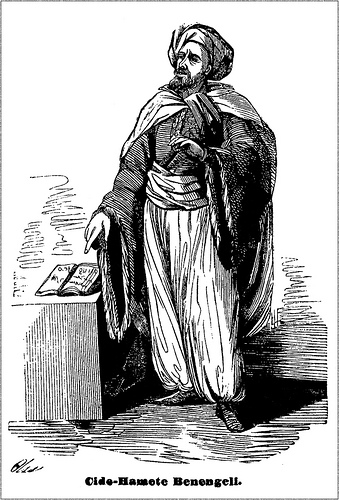 Horace Walpole, The Castle of Otranto, A Story. Translated by William Marshal, Gent. From the Original Italian of Onuphrio Muralto, Canon of the Church of St. Nicholas at Otranto (Dublin, 1765). RB.23.a.5931

Sir Henry Thomas, Spanish and Portuguese Romances of Chivalry. The revival of the romance of chivalry in the Spanish peninsula, and its extension and influence abroad. (Cambridge, 1920).  011853.s.70.