Silesia: a borderland in Central Europe

Silesia is a region now located mainly in Poland with small strips in the Czech Republic and Germany. Historically the province has been divided into the north-western Lower Silesia and the south-eastern Upper Silesia with the two biggest cities Wrocław (Breslau) on the Oder and Katowice respectively.  In the early Middle Ages Silesia was populated by various Slav tribes and was part of Great Moravia and Bohemia.

At the end of the 10th century it was incorporated into the Polish state by Mieszko I. Over the course of the next few centuries Silesia was ruled by the Silesian Piasts. In the 13th century the Piasts brought in a large number of German settlers and since then Silesia was under the influence of German culture and language.  Eventually it became part of Bohemia in 1335, and two centuries later fell under Habsburg rule. Its rich natural resources, especially coal and iron-ore deposits, and its important strategic position for Prussia were the cause of  wars with Austria for the possession of Silesia in the mid-18th century. Consequently, Frederick the Great of Prussia conquered most of Silesia and only a small part of the south-eastern corner was retained by Austria. 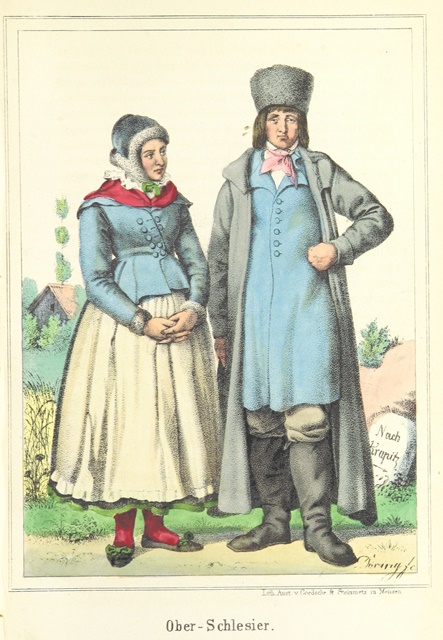 Prussian Silesia was then subjected to Germanisation, particularly strong during the implementation of the ‘Kulturkampf’ policy in the second half of the 19th century.  Lower Silesia was predominantly inhabited by Germans and was Protestant, while Upper Silesia had a mixed population of Germans, Poles and Silesians with Catholicism as the prevailing religion. The latter are regarded as an ethnic group of Slav origin speaking in Silesian. There is now an ongoing debate whether Silesian is a distinctive language, a Polish dialect or a regional language. Upper Silesians spoke Silesian at home and either German or Polish in public and clearly emphasized that they were neither Germans nor Poles.  Although Silesians had never created their own state, they built a society with a distinctive culture and language. In the 19th century there were unsuccessful attempts to codify Silesian, and only in 2003 was the first publishing house founded to publish books in Silesian.

Upper Silesia was an arena of political clashes between Polish and German nationalist movements at the turn of the 20th century. Each aimed to win the support of the local population regarding  its ownership. Ironically, the Kulturkampf served to strengthen Polish nationalism in the region, which eventually led to the inclusion of the eastern part of Upper Silesia into the newly-reborn Poland in 1922. This followed three Silesian uprisings in 1919-1921 and a 1921 plebiscite organised by the League of Nations. The aim of the uprisings was to win autonomy for Upper Silesia either within the Polish or German state. The uprisings were, however, considered by some Silesians as a civil war. The plebiscite was to decide its national status.  Both Germany and Poland wanted this territory due to its heavy industrialisation and strong economic development.

The results of the plebiscite held in 1921 in Upper Silesia from Stefan Dziewulski, Wyniki Plebiscytu na Górnym śląsku. (Warsaw, 1921)  X.700/15938. The red areas voted to be part of Poland, the blue ones to be part of Germany

The solution was thus to divide it between the two countries. Subsequently, the Prussian Province of Silesia within Germany retained Lower Silesia and the western part of the disputed territory of Upper Silesia. Austrian Silesia was mostly awarded to the newly-created Czechoslovakia, with a small area included in Poland. The region granted to Poland formed the Silesian Voivodeship and received significant autonomy from the Polish government, with its own legislative body and treasury. Polish Upper Silesia (the eastern part) was economically most important as it comprised three-quarters of Silesia’s coal production. The demographic structure of the divided territory, with the Poles and Germans living on both sides, was, however, politically disadvantageous.

At the beginning of the Second World War Upper Silesia was immediately annexed by the Nazis to the Third Reich and the extermination of the Polish population took place. After the war the German inhabitants were expelled, with Poland shifting westwards in 1945. Nowadays, in a free Poland, there are political movements seeking autonomy, separation or even  full independence for Silesia.