Velimir Khlebnikov is the co-inventor along with his fellow Russian poet Aleksei Kruchenykh of trans-sense or transrational language (zaum). This new approach to poetic language adopted by the Russian Futurists aimed at liberating sound from meaning to create a primeval language of sounds. 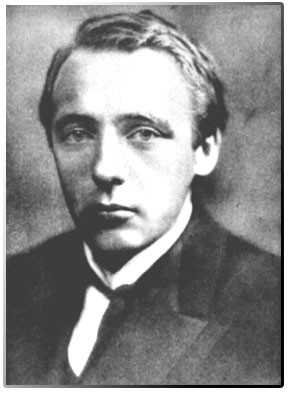 One of the first examples of Futurist trans-sense poetry is Khlebnikov’s Zakliatie smekhom (‘Incantation by Laughter’). This poem performs its title. It achieves this by using the one word stem, smekh or smeiat’sia (Russian for laughter/to laugh) to which prefixes and suffixes are added to generate new words without any external references or associations, so the poem becomes just the sound of laughter itself. It was first published in Studiia impressionistov (‘Impressionists’ studio’). 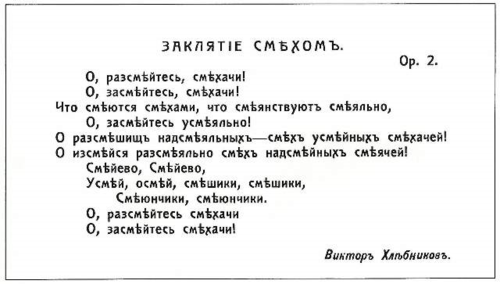 Here is part of it in transliteration so that you can see the almost musical patterns that are formed:

Amongst the Russian Futurist artists’ books that celebrate their centenary this year are Te li le and Igra v adu, both jointly written by Khlebnikov and Kruchenykh. The second half of the handmade lithographed Te li le is devoted to the poetry of Khlebnikov with drawings by Olga Rozanova and Nikolai Kulbin. 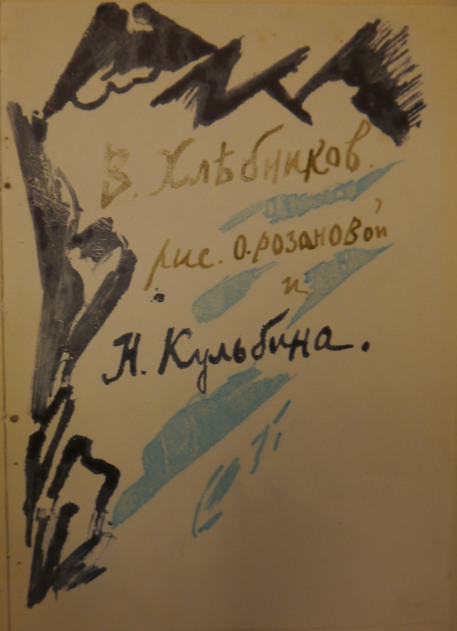 In Khlebnikov’s section appears the seminal poem ‘Bobeobi pelis’ guby’ (The lips sang red). Khlebnikov shows in this poem how he not only wanted to give the roots of words new emotional meanings (‘the word as such’) but also wanted to extend this and assign independent meanings to syllables and letters (‘the letter as such’).  For example the first word ‘Bobeobi’ consists of several “b”s linked by vowels to make it pronounceable. As Khlebnikov associated the letter “b” with the colour red (perhaps because of the b in guby = lips), the word bobeobi is used to mean red in this sentence (not the normal Russian word for red).  This kind of synaesthesia where colour is represented in terms of sound is reminiscent of the poetry of French symbolists such as Rimbaud who also assigned colours to letters (notably in his poem Voyelles). 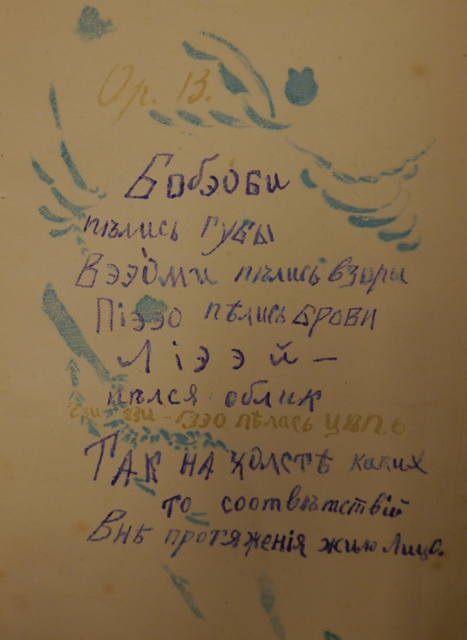 The poem Bobeobi by Khlebnikov as it appears in Te li le.

Another important Russian artists’ book published on the eve of the First World War 1 in 1914 was Igra v adu (‘A game in hell’). The text of this lithographed book which depicts a game between devils and sinners in hell, was begun by Kruchenykh and finished by Khlebnikov. This work recreates the unity of words and image found in medieval manuscripts often written and transcribed by different people at different times. 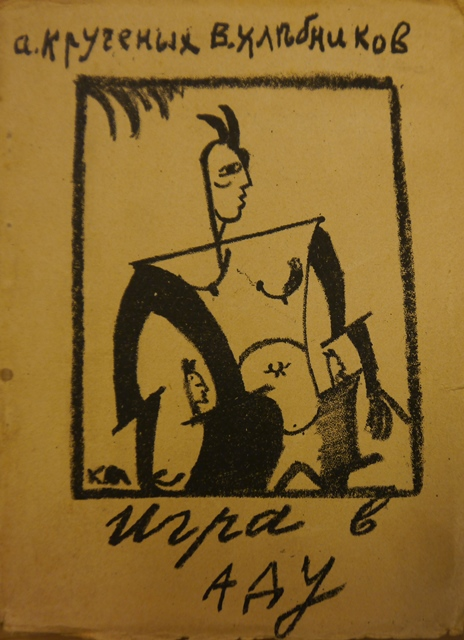 In attempting to create a universal language of sounds Khlebnikov did not confine himself to experimentation with Russian. He arranged his zaum languages into various types of made up language, as for example, the language of the gods (this includes non-Russian words such as ‘gamch’ and ‘gemch’ spoken by Eros) or of the birds (mostly onomatopoeic words) which he used in his play Zangezi (‘Beyond the Ganges’, Moscow, 1922; C.114.n.42). Khlebnikov was also interested in creating new alphabets; this is reflected in the cover of Zangezi by Petr Miturich which consists of flowering loops like the patterns of letters in Khlebnikov’s astral alphabet.

Another interesting late work by Khlebnikov is Ladomir. The designer of the striking cover of this book is not named but it has been attributed to Vasyl Yermilov. The copy held by the British Library (C.114.n.47) also has a dedication in Khlebnikov’s handwriting to a person called Sergei.

Books with texts by V. Khlebnikov and A. Kruchenykh held by the British Library:

Mirskontsa. [‘Worldbackwards’] (Moscow: 1912.) [41] leaves.  Lithographed text, handwritten by M. Larionov, A. Kruchenykh and others. Illustrated by N. Goncharova, M. Larionov, V. Tatlin and N. Rogovin. Cover of each copy has a unique collage by N. Goncharova. Six poems each by Khlebnikov  and Kruchenykh. C.114.mm.42.

Slovo kak takovoe. [‘Word as such’]( [Moscow, 1913]) 15p. Cover illustration by K. Malevich and one illustration by O. Rozanova. Futurist Manifesto on trans-sense language written by Kruchenykh and Khlebnikov. C.114.mm.23.

Books by Velimir Khlebnikov held by the British Library: