In 1897, church historian J.G.R. Acquoy from Leiden published an article in Archief voor Nederlandsche kerkgeschiedenis (British Library PP.177.ia), in which he described five booklets that had recently been found in the church tower of Boskoop, a tiny village close to Gouda. One of the booklets turned out to be a hymnbook dating back to 1566, containing psalms and hymns sung during clandestine open-air prayer gatherings in The Netherlands (of the sort that perhaps inspired Brueghel’s depiction of a crowd listening to John the Baptist). 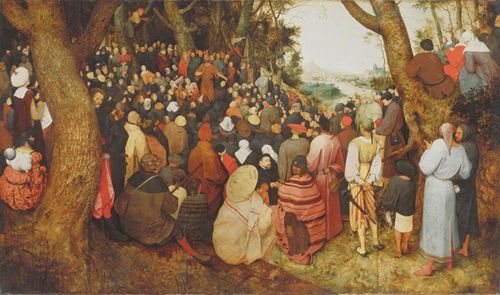 On the basis of an 18th century document it was assumed another songbook should exist: an enlarged reprint of the Boskoop hymn book also published in 1566. According to this source, this hymnbook included 38 psalms written by Jan Utenhove, and 19 hymns. The origin of the hymns, however, remained uncertain; the enlarged reprint was apparently lost.

Surprisingly a copy was found in the British Library in London: 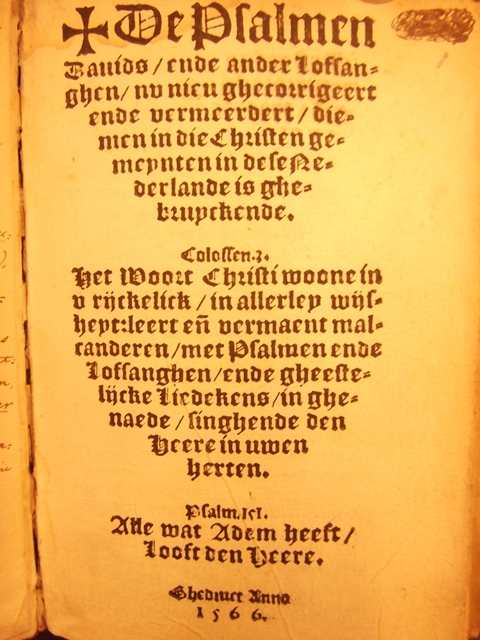 Although the songbook is listed in a number of catalogues, there was no known description whatsoever of its contents. Added MS titlepage of the hymnbook. The main text reads: “The XXXIX Psalms incorporated herein, are ….[follows a list], The Symbolism of the Apostles, The Ten Commandments, The Lord’s Prayer, etc. Apart from the underlined ones, all these are rhymed by  John Utenhove, but usually differ from the London edition of 1566.”

A recent article by Jaco van der Knijff* analyses and discusses – for the first time – the contents of this 16th century hymn book. It turns out the 19 hymns are quite different from what scholars had always assumed. They prove to be liturgical songs stemming from the Lutheran tradition, reprinted with reformed believers from the Calvinist tradition in mind.

The London songbook clearly has a different focus compared to the Boskoop one. It is therefore questionable whether ‘London’ is indeed an enlarged reprint of ‘Boskoop’. The repeated suggestion that the London songbook would be a publication of Gillis van der Erven in Emden  is also no longer tenable. There are good reasons to believe that this songbook was printed in Delft by Harman Schenckel, who was put to death for printing ‘heretical’ publications in 1568. It could even be the hitherto unidentified psalter which the printer mentioned during his trial.

By publishing the contents of the London songbook, an annoying gap in the hymnologic research is filled. More importantly, there is now a new source on the use of Lutheran hymns by Calvinists at the beginning of the Reformation in The Netherlands.

This hymnbook also proves that initially the dividing lines between Calvinists and Lutherans were not as clear as they would turn out to be in later times. Finally, the statements issued by the first synods of the Gereformeerde Kerk in The Netherlands against hymn singing find a new perspective: it is by no means excluded that the church leaders referred to songbooks like the London version from 1566.

Jaco van der Knijff, musical editor for the Reformatorisch Dagblad and currently preparing a PhD on the origins of ‘Eenige Gezangen’ (Some songs) in the 1773 edition of David’s Psalms.  E-mail: [email protected]

* This is an edited version of the English summary of Jaco van de Knijff’s article ‘Lutherse liederen voor gereformeerde gelovigen Beschrijving en poging tot duiding van een onopgemerkt gebleven Nederlands liedboekje uit 1566’, published in Jaarboek voor liturgieonderzoek 30 (2014) 105-136. We are grateful to him for letting us use it as a basis for this post.