Nadezhda Krupskaia, the Russian Bolshevik activist and politician, is perhaps best known as the wife of Vladimir Lenin from 1898 until his death in 1924. In 1902, the young couple moved to London to publish Iskra (‘The Spark’), the newspaper of the Russian Social Democratic Labour Party (RSDLP).

Krupskaia wrote about their time in London in her memoirs Vospominania o Lenine (‘Reminiscences of Lenin’). As this week sees the anniversary of not only Krupskaia’s birth but also her death, it seems a perfect opportunity to re-visit her time in London and, in particular, her connections to the British Library. 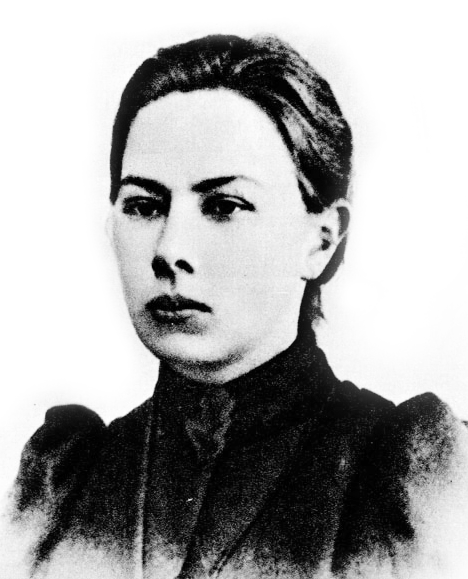 Arriving in London in April 1902, Krupskaia and Lenin were immediately overwhelmed by the city, or, in her own words, “citadel of capitalism”. She later described their first impressions and struggles as they battled with the “filthy” weather, incomprehensible language and “indigestible” British food:

When we arrived in London we found we could not understand a thing, nor could anybody understand us. It got us into comical situations at first.

While Krupskaia unfortunately doesn’t expand on the “situations” she and Lenin found themselves in, she does give a fascinating and detailed account of the year they spent in London between 1902 and 1903. In between attending meetings and revolutionary activities, Lenin and Krupskaia found time to explore London, with Primrose Hill being their spot of choice. The pair were also regular visitors to the British Museum, where, Krupskaia notes, Lenin spent half his time in the library. 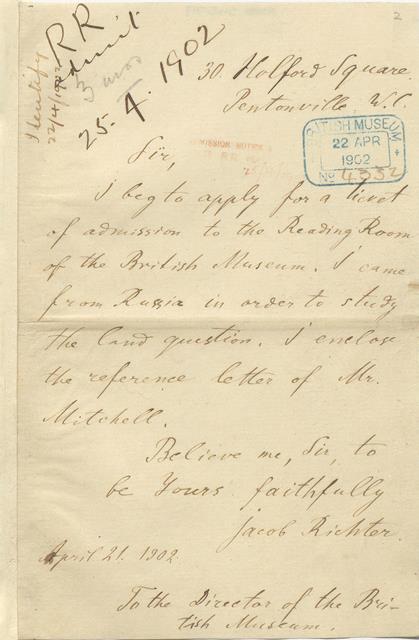 Lenin’s application (under the pseudonym Jacob Richter) for a reader’s ticket for the British Museum Library. British Library MS Add 54579

While there is no record of Krupskaia holding a reader’s ticket during her time in London, the British Library does hold a rare pamphlet autographed by Krupskaia in 1923. Written for the Ukrainian Soviet Socialist Republic publication Put’ prosveshchenia (‘The Path of Education’, P.P.1213.ce.), the pamphlet discusses the Faculty of Social Education at the Kharkiv Institute of Continuing Education.  Although the exact details are unknown, Krupskaia appears to recommend the pamphlet to a fellow comrade, most likely in her capacity as head of the government’s Adult Education Division. 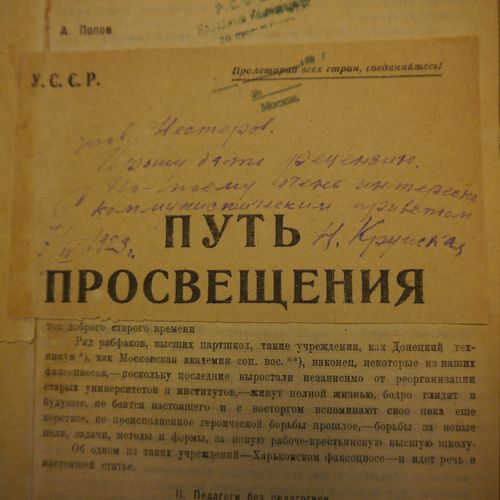 Another thread linking Krupskaia to the British Library is her early friendship with Ariadna Tyrkova-Williams, a Russian politician and journalist who was active in the anti-Bolshevik campaign during the Civil War. The British Library holds a unique collection of letters and papers of Tyrkova-Williams and her husband Harold Williams relating to the activities of the Russian Liberation Committee in London.

Tyrkova-Williams and Krupskaia studied together at the gymnasiia in St Petersburg as girls and remained friends throughout their teenage years. Tyrkova-Williams describes her friendship with Krupskaia, as well as Krupskaia’s early life, in her memoirs and letters, noting that it was Krupskaia who first introduced her to Marx’s work at the age of seventeen. The two women went on to choose politically opposing paths, with Tyrkova-Williams joining the Constitutional Democratic Party (Kadets), a liberal Russian political party, and Krupskaia becoming a Bolshevik revolutionary.

In a letter dated May 1931, Tyrkova-Williams refers to her friendship with Krupskaia. Responding to a flattering description of Krupskaia’s appearance, Tyrkova-Williams somewhat unkindly writes that she “did not have a single beautiful feature”, instead resembling a “piglet”. Krupskaia is believed to have suffered from Graves’ disease, which caused her eyes to bulge. Despite her somewhat cruel response to Krupskaia’s looks, Tyrkova-Williams declares in her letter that she loved her and, to a certain extent, still does.